If you would like a larger file, or to use the image in other ways, contact our Licensing team.
+5
+3
images
On display at V&A South Kensington
Design 1900 to Now, Room 76
This object consists of 3 parts, some of which may be located elsewhere.

Shapewear
2010 (designed)
Spanx is manufacturer of body-shaping underwear which became popular in the early 2000s as a way for women to achieve a thinner silhouette. The company was founded in Atlanta, Georgia, U.S. in 2000 by Sara Blakely. The idea originated when Blakely was getting ready for a party and decided to cut the toes off a pair of control top pantyhose so that she could fit into a pair of cream trousers. Although aesthetically the effect was what she was going for, the pantyhose would begin to roll up the legs which led to her wondering why there was no ready-made solution.

In 2010, Spanx released a men’s line, recognising a demand for male body-shaping garments. This t-shirt is composed of 92% Nylon and 8% Spansex/Elastane and is designed to aesthetically improve the physique of the male silhouette by compressing the abdominal and torso regions when worn creating the look of a firm chest whilst also reducing bulk when worn underneath clothes. The product also provides lumbar support which helps to improve posture so that the wearer stands taller. There are also special breathable zones that are designed to release heat and prevent the wearer from feeling too hot and sweaty whilst wearing the top.

The packaging is integral to marketing the original product and was developed by Blakeley with help from a graphic design friend. There was a focus on bold colours such as bright red (as opposed to grey and beige colours) which was unusual at the time for hosiery packaging. In addition, she also decided to use an illustrated drawing of three cartoon character girls on the cover. Men’s Spanx follows this trend with a simple bright red and orange background and a hand drawn male character.

This t-shirt was acquired as part of the Shekou Project, an international partnership between the V&A and China Merchant Shekou Holdings (CMSK) to open a new cultural platform called Design Society in Shekou. It was included in the inaugural exhibition, ‘Values of Design’, in the V&A Gallery at Design Society in a subsection that looks at enhancing the human figure. 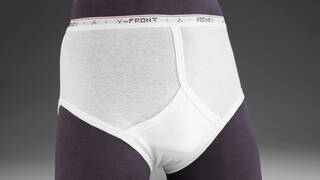