If you would like a larger file, or to use the image in other ways, contact our Licensing team.
+5
+3
images
Not currently on display at the V&A

2016
Radical Love by Heather Dewey Hagborg is a pair of 3D-printed portraits that explore gender identity stereotypes in forensic DNA phenotyping. Radical Love is a collaboration between transdisciplinary artist Dewey Hagborg and whistleblower and activist Chelsea Manning. For the work, a 3D-portrait was generated of Manning – during incarceration – by a sample of her DNA using a process known as DNA phenotyping. The generated portraits (in .WRL and .JPG) were originally commissioned by Paper Magazine to illustrate their September 2015 feature on Manning, and the 3D-printed portraits were first printed by the V&A for an exhibition at the World Economic Forum in January 2016. Radical Love consists of two 3D printed portraits, two digitally rendered portraits in .MOV and .JPG format, the .WRL 3D render file and the envelope which contained the DNA samples that were sent to Dewey Hagborg from Manning.

The physical portraits are 3D printed in sandstone with an epoxy resin coating to finish. Sandstone is the only material capable of full-colour 3D prints. Models are created by printing binder material and colored ink layer-by-layer into a bed of gypsum-based powder. After printing, the models are finished with a cyanoacrylate (super-glue) sealant to ensure durability and vivid colors. The full colour life-sized 3d printed portraits of Manning were generated from analyses of her DNA, extracted from cheek swabs and hair clippings sent by Manning to Dewey Hagborg through the mail. Manning chose to only have the ‘female’ and ‘neutral’ profiles generated in line with her own gender identity and subsequent transition, as when DNA phenotyping profiles are created, gender (as well as race and other determining characteristics) must be manually indicated. Manning was in dialogue with Dewey Hagborg from prison throughout the creation process.

Dewey Hagborg is an artist and educator who is interested in art as research and critical practice. Her controversial biopolitical practice includes the project Stranger Visions in which she created portrait sculptures from analyses of genetic material (hair, cigarette butts, chewed up gum) collected in public places. Dewey Hagborg has shown work internationally at events and venues including the World Economic Forum (2016), Shenzhen Urbanism and Architecture Biennale (2015), the New Museum (2011), the Centre Pompidou (2017) and PS1 MOMA (2011).

Manning is an American activist and former United States Army soldier. She was convicted by court-martial in July 2013 of violations of the Espionage Act and other offences, after disclosing nearly 750,000 classified, or unclassified but sensitive, military and diplomatic documents and was imprisoned between 2010 and 2017. The material leaked came to be known as the "Iraq War Logs" and "Afghan War Diary". The leaked material was published by WikiLeaks and its media partners between April 2010 and April 2011. Manning is a trans woman who, in a statement the day after sentencing, said she had a female gender identity since childhood, wanted to be known as Chelsea, and desired to begin hormone replacement therapy.

DNA phenotyping is the process of predicting an organism’s phenotype – set of observable characteristics – using only genetic information collected from genotyping or DNA sequencing. It is mainly used to refer to the prediction of a person’s physical appearance and/or biogeographic ancestry for forensic purposes. As a technique for prediction, DNA phenotyping is highly controversial, as results are often subject to the information known before the profile is generated. This information may be open to bias, as well as the images that the algorithm was trained with to form the profiles. The profiles generated through the process often have low accuracy, and often depend on witness testimonies and recollection. This form of data visualisation and its design is a rapidly developing field, with the societal consequences of its application under scrutiny. Radical Love asks viewers to reassess the accuracy of seemingly ‘objective’ scientific methods of prediction and profiling. In the case of DNA phenotyping, which is seen to reinforce biases of gender, they can reinforce prejudices against race and sexuality in their application in law enforcement and policing.

Radical Love makes a strong case for the use of interdisciplinary approaches, such as those presented by artists and designers, to interrogate what role digital design processes like DNA phenotyping can and should have in contemporary society. This work sits alongside genetic profiling kit 23andMe in the Museum’s collection, adding to a further analysis of the role DNA profiling and its proposition as a design tool, as well as the V&A’s vast collection of portraiture. 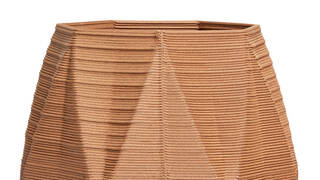 read At the press of a button: A V&A history of 3D printing 3D printing is an additive form of manufacturing, which involves heating (otherwise known as 'extruding') plastic, such as PLA (Polylactic acid), ABS (Acrylonitrile Butadiene Styrene) or PET (Polyethylene terephthalate), or other types of material, such as sandstone, metal or resin, to con...
Object details