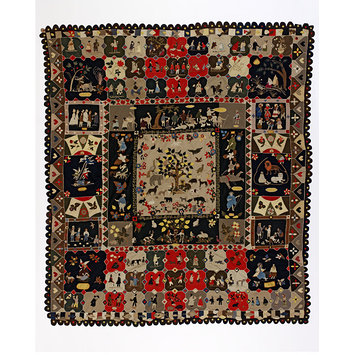 Ann West, the creator of this needlework masterpiece, may have owned a millinery and dressmaking shop in Chippenham, Wiltshire. To make the coverlet, she used brightly coloured woollen material from coats and uniforms, a type of cloth made in the West Country.

The design shows Adam naming the animals in the Garden of Eden, together with 64 brightly coloured woollen panels showing other vivid scenes from Bible stories, and lively depictions of everyday characters and occupations. Captions are embroidered over the appliqué pictures, adding humorous and personal touches. Each panel acts as a window onto early nineteenth century life, and they include a depiction of a double wedding, a 'Poor Sailor', and a 'Negro servant and Master'. The term 'negro' was used historically to describe people of black (sub-Saharan) African heritage. The term is repeated here in its original historical context.

Coverlet composed of panels of wool appliqué and patchwork, with embroidery. Designed with central panel of Adam naming the animals in the garden of Eden, surrounded by 64 square vignettes showing scenes from everyday life. The coverlet bears a signature 'Ann West's work', and the date '1820'.

Wool appliqué and patchwork, with embroidery

As the educational programme of Victorian England established itself, with its emphasis on social improvement, quilts moved from the home to the public sphere. Some of the most inventive examples of 19th-century patchwork were produced for exhibition and display, often with a didactic aim. The pieces were designed to show off individual skill - such as difficult inlay patchwork - but also to promote Victorian values of perseverance and hard work.

Ann West may have owned a millinery and dressmaking shop in Chippenham, Wiltshire. This cover or hanging shows Adam naming the animals in the Garden of Eden, together with 64 panels that include lively depictions of everyday characters and occupations. One of the scenes is from Sarah Trimmer's popular educational book, A Series of Prints from the New Testament (1790). Captions have been embroidered over the pictures, and the cover may have been intended as an educational device for children. 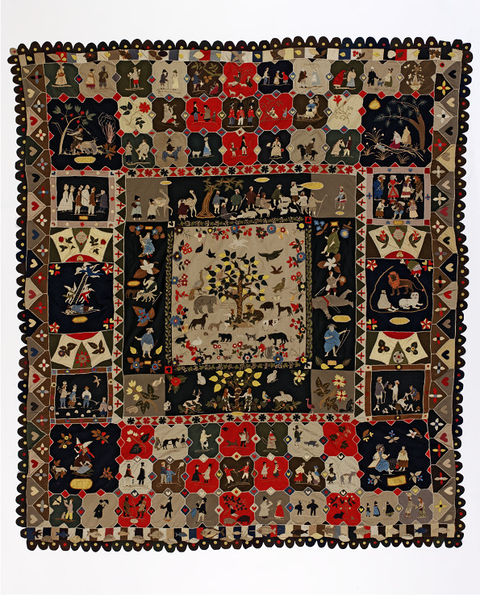