1967 (made)
Barbara Hulanicki and her husband John Fitz Simon set up Biba in 1963 as a mail order boutique. The success of their affordable, youthful designs enabled them to open a small shop in Kensington the following year. They attracted glamorous pop stars, bohemian aristocrats and impoverished students alike. In April 1966, the American news magazine Time published a special edition celebrating ‘London: The Swinging City’. It named Biba as ‘the most in shop for gear’

The label was famous for murky colour palettes, but they also produced some strikingly colourful garments. Purple was a typical Biba colour, but when combined with a vibrant yellow zig-zagging print and a short flirty skirt, the effect is dramatic. In the 1960s, Biba clothing featured some of the shortest miniskirts available, focusing attention on the wearers's legs. Their reputation for micro-minis started almost by accident following a shipment of jersey skirts in 1966. Barbara Hulanicki, the designer, recollected in her autobiography, A to Biba:

'The skirts were only 10 inches long. God, I thought, we'll go bust - we'll never be able to sell them. I couldn't sleep, but that little fluted skirt walked out on customers as fast as we could get it onto the hatstands.' 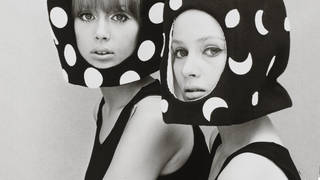 read An introduction to 1960s fashion Marked by sweeping social change, the 1960s is a decade that still holds a special significance, seeing traditional hierarchies begin to dissolve and make way for the birth of the modern age.
Object details