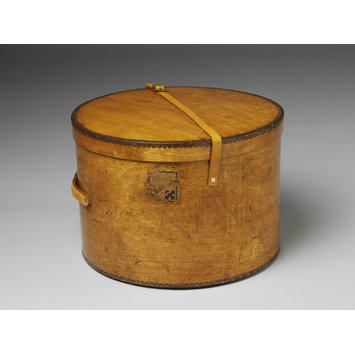 The box carries stamps for ‘Luterma’ and ‘Venesta’ on the inside of its lid. From 1897 Luterma was the trade name for products made by the A.M. Luther Woodworking Company for Mechanical Woodworking (founded 1877) in Tallin, Estonia. Luterma was one of, if not the, most important manufacturers of plywood and plywood products in Europe in the late 19th and early 20th centuries. The Venesta Plywood Company, founded in 1908, was Luterma’s U.K. distributor (‘Venesta’ is a combination of the words ‘veneers’ and ‘Estonia’).

Luterma began to make plywood hatboxes in the mid-1890s, under their newly-formed Department of Sundry Goods. The boxes were made to a range of standardised sizes, using a basic mechanised ‘wrapping’ technique. Other products made in the same department included plywood pails, crates and chests. All of these products were manufactured in large quantities for a growing, global market. Venesta sold hatboxes of this type at least until the end of the 1930s. Their 1936 ‘sundries’ catalogue advertises a hatbox apparently of the same design (although lined), offered in four different sizes ‘made to nest’.

The box is in two parts - a main body with separate lid. A leather strap, with buckle, extends over the lid and holds it in place. A second smaller strap is attached to the side of the box - this allows it to be carried by hand.

The circular form of the box is made from a single sheet of birch plywood. The lid is slightly wider in diameter, allowing it to slot over the top edge of the box. The base of the box and the top of the lid are both formed from flat sheets of plywood. A punched metal band runs around the lower edge of the box and upper edge of the lid, presumably to adding strength and as protection against damage. The punching on these bands is irregular, suggesting that it was done by hand.

The leather straps are replacements, although the box would have had straps in this configuration (one to hold the lid closed, and one for carrying) when first made. The box is unlined. It carries stamps on the inside of its lid for 'Luterma' and 'Venesta'. There are the remains of a paper sticker on its outside edge. This sticker, now illegible, was presumably used to label it for travel.

Stamped on the inside of its lid by Luterma and Venesta.

The Russian company Luterma made
these hatboxes, bags and suitcases.
Luterma was an important 20th-century
plywood manufacturer, with a large
British distributor called Venesta. They
sold moulded products like these in great
quantities. The hatboxes and suitcases
were marketed as lightweight and strong
and came in a range of sizes. They typify
a move towards smaller luggage in the
1920s and ’30s, linked to new kinds of
travel in aeroplanes and cars.

HATBOX
About 1930
Manufactured by Samson (later Samsonite)
Made in the USA
Moulded 3-ply birch plywood, with an additional
reinforcing layer of 3-ply at top and bottom
V&A: NCOL.524-2015

SUITCASE
About 1930
Manufactured by Luterma (previously A.M. Luther),
distributed by Venesta
Made in Estonia
Moulded and sheet 3-ply birch plywood with an
additional reinforcing layer of 3-ply added around the
edge of the lid; leather straps, hinges and handle;
paper labels, wax seals
Originally owned by P. Morton Shand (1888–1960),
contributor to the Architectural Review
Given by the Shand family
V&A: W.12-2016

HANDBAG
About 1930
Bags of this type were used by both men and women,
and sold in various sizes
Manufactured by Luterma (previously A.M. Luther)
Made in Estonia
Moulded 3-ply birch plywood with leather straps
V&A: NCOL.602-2016

SMALL BAG
About 1930
Small bags of this type were sold for various uses,
including as lunchboxes and for carrying botanical
specimens
Manufactured by Luterma (previously A.M. Luther)
Made in Estonia
Moulded 3-ply birch plywood with leather straps
V&A: NCOL.303-2017 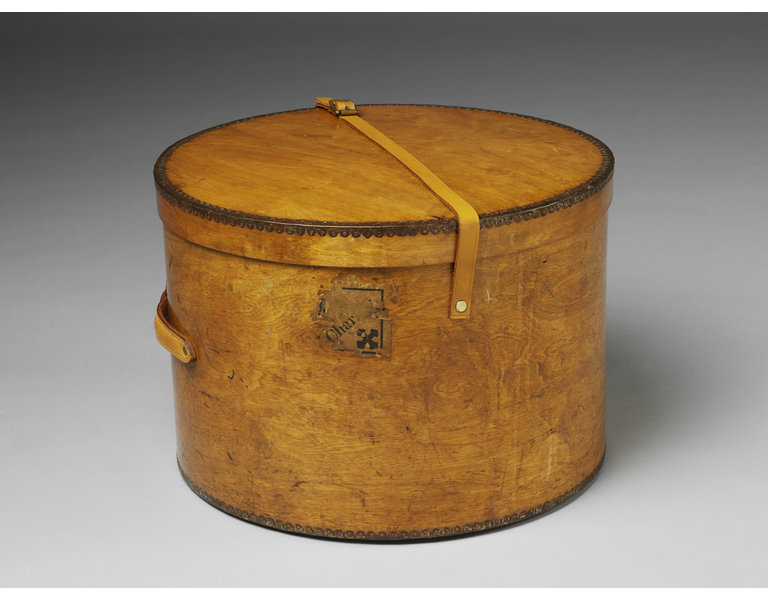