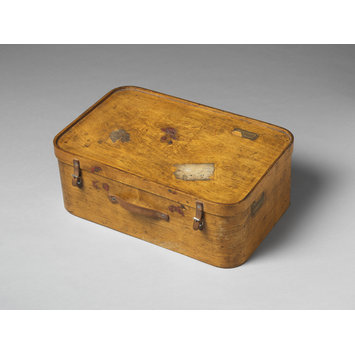 This suitcase is an example of a once-common plywood object type, and one that helps demonstrate the very wide range of late 19th and early 20th century object types which were made of plywood. The suitcase carries stamps for ‘Luterma’ on its interior and exterior. From 1897 Luterma was the trade name for products made by the A.M. Luther Woodworking Company for Mechanical Woodworking (founded 1877) in Tallin, Estonia. Luterma was one of, if not the, most important manufacturers of plywood and plywood products in Europe in about 1900.

Suitcase of bent and sheet plywood, with brown leather straps, hinges and handle. The lid of the case fits snugly over the base. The straps are fastened with metal buckles. On the exterior of the case are the remains of numerous paper labels and red wax seals. Inside the case is stamped the maker's logo. The case is not lined.

Note: all leather parts are replacements.

Moulded and sheet 3-ply birch plywood with an additional reinforcing layer of 3-ply added around the edge of the lid; leather straps, hinges and handle; paper labels, wax seals

This suitcase was given to the V&A in 2016 by the Shand family [2016/43]. It was in the possession of the retired furniture designer and teacher Mary Shand, who is also Lady Stirling, the widow of architect Sir James Stirling. The suitcase originally belonged to Lady Stirling’s father, Philip Morton Shand (1888-1960), a leading figure in British modernism during the 1920s and 1930s. Among Shand’s many achievements in this context were his translation of Walter Gropius’s The New Architecture and the Bauhaus (1930) and his organization of the first exhibition of Alvar Aalto’s work (furniture and sculptures) in the UK (at Fortnum and Mason in 1933). Shand was also closely associated with the Architectural Review and MARS (Modern Architectural Research Group, 1933-37).

The suitcase has been extensively used; it might be called pleasingly used. It has numerous travel stickers for rail journeys and the remnants of three red wax customs seals, indicating transit through European countries. According to Mary Shand her father used the suitcase often, including on trips to the Baltic countries (including Finland and Estonia) and in 1933 when he attended the CIAM conference (Congrès Internationaux d'Architecture Moderne) in Athens (subsequently known as the Athens Charter conference). The Luther company had a UK distributor, Venesta, run from 1925 by Shand’s friend Jack Pritchard. Pritchard was the founder (with Wells Coates) of Isokon and, in 1935, the Isokon Furniture Company. Shand might have acquired the suitcase through Pritchard or on his trip to Estonia.

The Russian company Luterma made
these hatboxes, bags and suitcases.
Luterma was an important 20th-century
plywood manufacturer, with a large
British distributor called Venesta. They
sold moulded products like these in great
quantities. The hatboxes and suitcases
were marketed as lightweight and strong
and came in a range of sizes. They typify
a move towards smaller luggage in the
1920s and ’30s, linked to new kinds of
travel in aeroplanes and cars.

HATBOX
About 1930
Manufactured by Samson (later Samsonite)
Made in the USA
Moulded 3-ply birch plywood, with an additional
reinforcing layer of 3-ply at top and bottom
V&A: NCOL.524-2015

SUITCASE
About 1930
Manufactured by Luterma (previously A.M. Luther),
distributed by Venesta
Made in Estonia
Moulded and sheet 3-ply birch plywood with an
additional reinforcing layer of 3-ply added around the
edge of the lid; leather straps, hinges and handle;
paper labels, wax seals
Originally owned by P. Morton Shand (1888–1960),
contributor to the Architectural Review
Given by the Shand family
V&A: W.12-2016

HANDBAG
About 1930
Bags of this type were used by both men and women,
and sold in various sizes
Manufactured by Luterma (previously A.M. Luther)
Made in Estonia
Moulded 3-ply birch plywood with leather straps
V&A: NCOL.602-2016

SMALL BAG
About 1930
Small bags of this type were sold for various uses,
including as lunchboxes and for carrying botanical
specimens
Manufactured by Luterma (previously A.M. Luther)
Made in Estonia
Moulded 3-ply birch plywood with leather straps
V&A: NCOL.303-2017 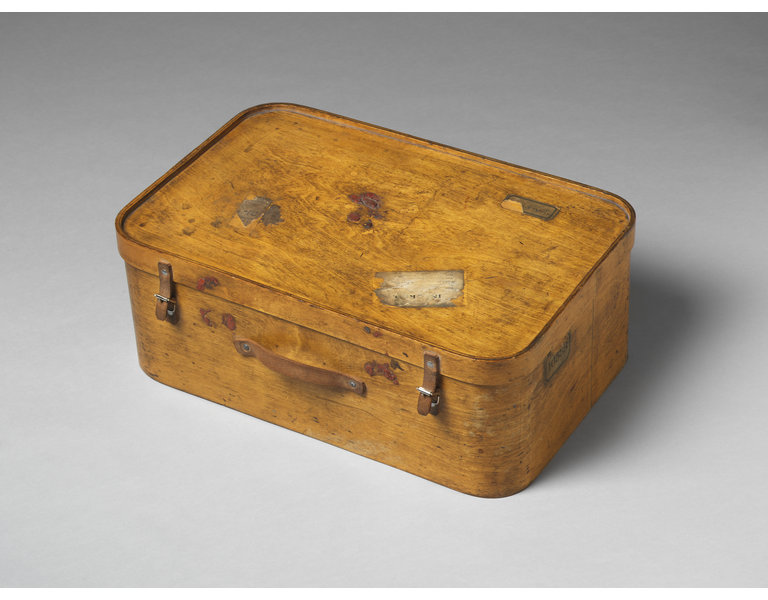