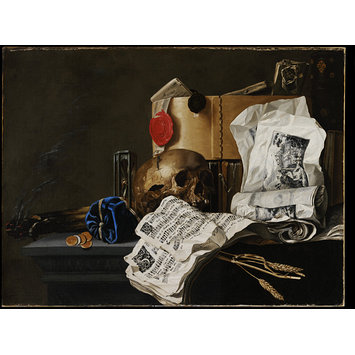 Although little is known about Peschier, he specialised in the production of highly refined ‘vanitas’ paintings also called ‘memento mori’. This genre painting combines still-life elements with diverse inanimate objects so as to function as a reminder of the vulnerability of human life and invite the viewer to meditate upon the passing of time. This type of pictures reached the height of its popularity in Western Europe, especially in the Netherlands, during the 17th century and became characteristic of Baroque art.

A series of objects displayed on a table against a neutral beige background. These include a skull, hour glass, purse, coins, sheet music, prints, a smouldering brand, books, letters, wax seals and wheat stems.

Mr. C. D. Rotch, of Wimbledon, London, was a collector with a particular interest in furniture. Like other furniture collectors of the early 20th century he was influenced by the furniture connoisseur and dealer R.W. Symonds. Following the prevailing taste of the time, his collection focused on early to mid-Georgian carved mahogany examples and was later bequeathed to the Victoria and Albert Museum on his death in 1962 (see R.W. Symonds, 'Mr. C.D. Rotch's Collection of Furniture', Country Life, 7 June 1924, pp.937-39). At the time, his bequest was described by the authorities as "The most remarkable single gift of English Furniture ever presented to the Museum". The bequest also included just over twenty 17th, 18th and early 19th century portraits and figure studies, in pastel and in oil, as well as a selection of still lives and animal pictures.

This painting is a Vanitas still life, i.e. a genre of painting depicting an arrangement of diverse inanimate objects including fruits, flowers, shellfish, vessels and artefacts. Although different traditions of still-life painting developed in Flanders and in the Netherlands where they became especially popular commodities in the new bourgeois art market during the 17th century, they usually invite the viewer to meditate upon the passage of time and human mortality. The asymmetrical composition and cool palette enlived with touches of vivid colours are particularly characteristic of Baroque art.

Among the panoply of objects displayed in the present painting, the skull, the hour glass and the smouldering brand function as ‘memento mori’, that is a reminder of the transience of earthly life; while other such as the purse, the coins and the wheat stems are shown as deceiving attributes of power and wealth destined to be taken away by death. The sheet of music, prints, books, letters and wax seals allude to memory and the passing of time.

All of these themes are addressed in the text of the Italian madrigal open on the table written by Giovanni Battista Guarini (1538 – 1612) in the tradition of love poetry developed by the Italian 14th-century poet Petrarch (1304-1374). The artist deliberately juxtaposes the lines 'Occhi miei, che vedeste/ Il bel idol vostro...' or 'Eyes of mine, which see your beautiful idol…' on the sheet of music with the empty eye sockets of the skull.

Little is known about Peschier. This painting belongs to a group of only 10 signed still-life paintings, all executed between 1659 and 1661. A particularly close comparison can be made with the slightly smaller Peschier Vanitas in the Rijksmuseum, Amsterdam (A 1686) which contains almost all of the same elements but also includes a violin. One other comparable work is the Vanitas still life with a skull, celestial globe and a plaster cast of a head now in the Philadelphia Museum of Art.

Nothing is known of his life. It has been suggested (Faré, 1962) that he was of French Protestant origin and worked in Holland. Only four paintings by him are known, all <i>Vanitas</i> still life: V. & A. Museum, P.46-1962; Rijksmuseum, Amsterdam (dated 1660); Pushkin Museum, Moscow; and Payelle collection, Paris (dated 1660). He belongs to a group of <i>Vanitas</i> painters that includes H. Andriessen, J. D. de Claeuw, L. van de Vinse and P. van der Willigen.

This is one of only four known paintings by this artist.
As is typical of the genre, there are various types of emblems: of death and the brevity of life - the skull, what appears to be a will, dated 7 November 1659, above it, the hour-glass and smoking brand; of the futility of the arts and of wealth - the song - and sketch-books, the purse and coins; and of resurrection - the ears of corn.
The opening words of the music seem deliberately juxtaposed with the empty eye-sockets of the skull. The text, which was set to music several times in the 17th century, is by Guarini:
Occhi miei, che vedeste
Il bel idol vostro in pred'altrui,
Com'all'hor ambedue non vi chiudeste?
E tu, anima mia, com'al gran duolo
Non te'n fuggisti a volo?
Ahi! che posso ben dire
Ch'il soverchio dolor non fa morire ?
The composer of the music, which is almost certainly a genuine piece, has not been identified; he could possibly be Benedetto Ferrari, who set the lines in his <i>Musiche varie a voce sola</i>, 1633, though the page is plainly shown as for a part, and not a solo voice. Alternatively, the setting could be from an unrecorded collection (information from Dr Nigel Fortune).

Vanitas paintings are still-life scenes with objects that symbolise the transience of human life. Here the skull and hourglass remind the viewer of the passing of time, while the coins and music allude to the end that death brings to wealth and earthly pleasures. Vanitas pictures became particularly popular during the 17th century, especially in the Low Countries. 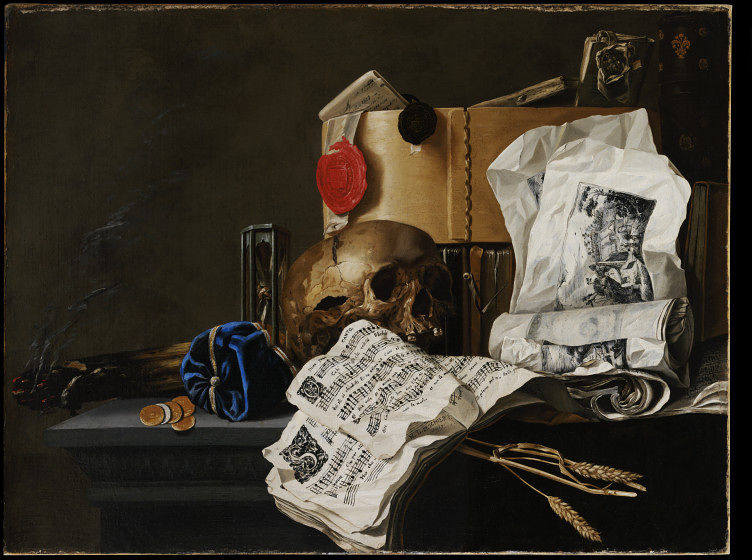