If you would like a larger file, or to use the image in other ways, contact our Licensing team.
BETA
+19
BETA
+17
images
Not currently on display at the V&A
On short term loan out for exhibition

1860-1880 (made)
The motifs on this extremely exuberant outer kimono (uchikake) relate to the Kabuki play, Shakkyo (Stone Bridge). Originally derived from a Chinese legend, the story was adapted as a play for the classical No theatre in the Muromachi period (1336-1573), and then a Kabuki version became extremely popular in the Edo period (1615-1868). This scene on the kimono shows a bridge over a steep gorge near the summit of Mount Seiryo which was reputed to lead to the Buddhist paradise, guarded by shishi (mythical lions). The Kabuki play culminates in a dramatic shakkyomono, or lion dance. The figure on the bridge is a Kabuki actor who embodies the spirit of the shishi, while below are the actual shishi depicted alongside other figures surrounded by peonies. It is possible, therefore, that the uchikake was worn for a Kabuki theatre performance. Costumes worn on stage certainly needed to be flamboyant and eye-catching, but the motifs were not normally so literal. It is more likely, therefore, that this garment belonged instead to a high-ranking courtesan. It would have been worn when parading through the pleasure quarters.

The three figures, shishi and peonies are composed of satin and crepe silk, dyed in bright colours, which have been applied to the black ground and then outlined with couched gold-wrapped thread. The bridge, clouds, water, leaves and other elements are also in couched gold embroidery. The design is padded in places to add extra three-dimensionality, while the eyes of the shishi are of glass as are those of the main figure on the bridge who also has actual hair, from an animal, and buttons of metal. 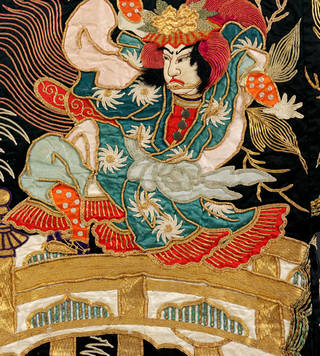 interact Kimono for a courtesan? The motif on this exuberant outer-kimono (uchikake) relates to a popular kabuki play – a traditional Japanese form of theatre – derived from the Chinese legend of Shakkyō (meaning Stone Bridge). The bridge, over a steep gorge near the summit of Mount Seiryo, was reputed to lead to the Budd...
object details