If you would like a larger file, or to use the image in other ways, contact our Licensing team.
BETA
+19
BETA
+17
images
On display at V&A South Kensington
Furniture, Room 135, The Dr Susan Weber Gallery

1938 (made)
Eileen Gray, the Irish-born designer and architect, produced work which in her own time was considered bold and original. Even today it appears remarkably modern. Though her early work was in a geometric Art Deco style and featured luxury materials, from the 1920s she turned towards the more functionalist approach associated with Modernism.

She designed this chair in about 1938 for her house at Castellar in the south of France, which was built to her own design between 1931 and 1933. The canvas seat is suspended in an S-bend of perforated, laminated wood, and the chair can be folded to half-size for storage. This chair is a prototype and has never been put into production. It was later given to the Museum by the designer. 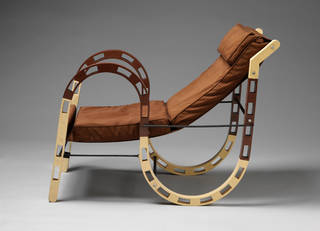