If you would like a larger file, or to use the image in other ways, contact our Licensing team.
BETA
No image available
BETA
We don’t have an image of this object online yet. V&A Images may have a photograph that we can’t show online, but it may be possible to supply one to you. Email us at vaimages@vam.ac.uk for guidance about fees and timescales, quoting the accession number: 38041800804544
Find out about our images
On display at V&A South Kensington
Request to view at the National Art Library

Artist's Book
1965 (published)
Sculptor, writer, artist and performer Liliane Lijn began to produce poem machines in 1962. These works use text that is rotated at speed on a cylindrical or conical structure.

Her sources of inspiration for this project were her reading of Buddhist texts and the Tibetan prayer wheel, works by William S. Burroughs and the cut-up technique.

'Sky never stops' was made in 1965 and is one of this series. The words, which are made from letraset, are affixed to a cone that revolves on a turntable. As they revolve the words become blurred and according to Lijn are 'sublimated and become pure energy'.

During the 1970s Lijn developed this theme further with her koan sculptures which use the same conical structure as 'Sky never stops' but which use colours rather than words. She also produced large scale sculptures such as the White Koan which can be seen today on campus at the University of Warwick. 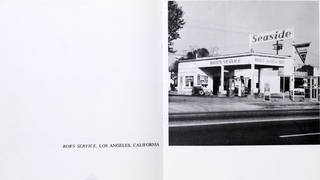 read Book as idea In the 1960s conceptual art emerged as a bold new movement. Its exponents believed in art as an idea, or concept, able to exist in the absence of an object as its representation. Many conceptual artists wanted to dismantle established structures of the artworld. Some felt a need to move aw...
object details