If you would like a larger file, or to use the image in other ways, contact our Licensing team.
BETA
BETA
On display at V&A South Kensington
Request to view at the Prints & Drawings Study Room, level F , Case TOPIC, Shelf 4
This object, or the text that describes it, is deemed offensive and discriminatory. We are committed to improving our records, and work is ongoing.

Europe supported by Africa and America

Print
1796 (made)
The Dutch captured the British colony of Suriname during the Second Anglo-Dutch War (1667). Under the West India Company it was developed as a plantation slave society and became a primary destination for the Dutch slave trade. The brutal regime caused high mortality; despite the import of 300,000 slaves between 1668 and 1823, the population never grew beyond 50,000. ‘Maroonage’ became the major form of resistance. Fugitive slaves, or ‘maroons’, escaped inland to form permanent communities from where they waged a campaign of guerrilla warfare against the Dutch.

In 1774 the Scottish-Dutch soldier John Gabriel Stedman witnessed the brutal oppression of slaves during a campaign against the maroons, which he described in his Narrative of a Five Years Expedition Against the Revolted Negroes of Surinam. The book, which included illustrations by William Blake, was adopted by abolitionists, though Stedman was thought to support reform rather than abolition.

This allegorical image is in the tradition of ‘The Four Continents’, in which the continents are depicted as female figures. Blake, the abolitionist, has included gold arm bands on the arms of Africa and America to symbolise their enslavement to the central figure of Europe. However, the fact that Europe is being physically supported by her companions suggests the possibility of a more equitable relationship. 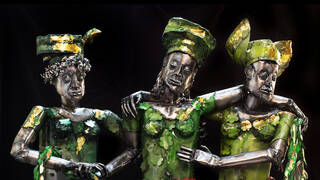