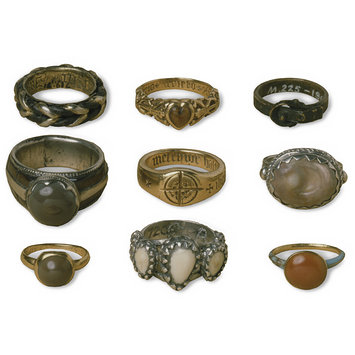 A belief in the magical or curative properties of gemstones, minerals and other natural materials has long existed. The brown stone set into this ring was known as a toadstone. Toadstones were especially popular in the Middle Ages and Renaissance periods. They were most often set in rings - the natural shape of the toadstone fitted a ring bezel well, and the toadstone could be worn daily and touched or monitored for any changes.

The round, brown toadstone, also known as 'crapaudine' or 'crappot', was believed to be effective against kidney disease and was a sure talisman of earthly happiness, according to Johannes de Cuba, writing in his Hortus Sanitatis (Garden of Health) in 1498. Wearers also believed that it would give off heat if exposed to poison. This was described by Fenton in 1569 "Being used in rings they give forewarning of venom". In 1627, Lupton claimed that ‘A Tode stone (called Crapaudina) touching any part be venomed, hurte or stung with Ratte, Spider, Waspe or any other venomous Beasts, ceases the paine or swelling thereof’. It was also said to protect pregnant women from fairies and demons and to prevent their child being exchanged for a changeling.

Toadstones were highly valued and often appeared in contemporary literature – according to Shakespeare’s ‘As you like it’:
‘Sweet are the uses of adversity;
Which, like the toad, ugly and venomous,
Wears yet a precious jewel in his head.’

They were included in the stock of many jewellers. An unmounted toadstone was found as part of the Cheapside Hoard (now in the Museum of London), the stock of a 17th century jeweller which was found in the cellar of a London house in the early 20th century.

Despite the name and former beliefs, toadstones are the fossilised teeth of a fish of the Jurassic and Cretaceous period called 'Lepidotes'. Lepidotes had a mouth with a wide palate set with rows of rounded, peg-like teeth which it used to crush the shells of molluscs.

The heart warming inscription inside the hoop reads 'A friend at need doth gould exceed', suggesting the value of friendship over worldly wealth and possibly indicating that the ring was a gift from one friend to another.

Edmund Waterton used the fortune which was made by his family’s involvement in the British Guiana sugar plantations to put his collection together. His grandfather owned a plantation known as Walton Hall and his father, Charles Waterton, went to Guiana as a young man to help run La Jalousie and Fellowship, plantations which belonged to his uncles. When slavery was abolished in the British territories, Charles Waterton claimed £16283 6s 7d in government compensation and was recorded as having 300 slaves on the Walton Hall estate.

Gold ring, the circular bezel set with a toadstone and inscribed A friend at need doth gould exceed.

Gold ring set with a toadstone

From the Waterton Collection 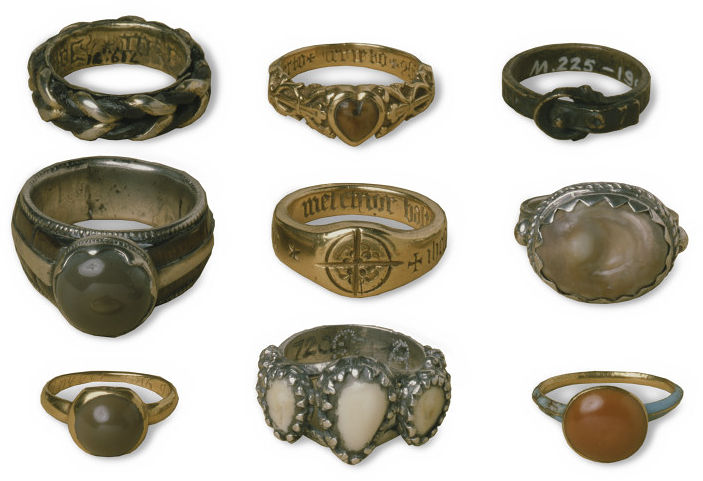