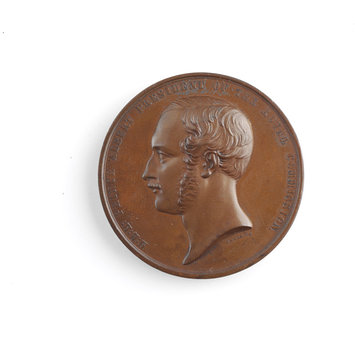 Exhibitors Medal for the Great Exhibition of 1851

A version of this Exhibitors Medal was presented to around 14,000 exhibitors from Britain, her colonies, and thirteen foreign countries, who displayed exhibits in the Great Exhibition of 1851. The medals were accompanied by a certificate illustrated with detailed engravings of William Wyon’s medal design, and a copy of the extensive Juries’ reports on the exhibits.

This is one of five official award medals for the exhibition, presented on behalf of Queen Victoria. Prince Albert, depicted here in profile on the obverse (front), was the President of the Royal Commission which was charged with organising the exhibition, and orchestrated the medal awards. The medals were struck in bronze, the metal considered most appropriate for the development of superior skill and ingenuity in medallic art. This reflected the Great Exhibition’s mission of promoting British manufacturing through encouraging excellence in industrial design, and developing public taste. The event was also intended to be a truly international cultural showcase and an example of collaboration between nations. The globe and dove design on the medal reverse reflect this aspiration.

This example forms part of an elaborately bound, book-shaped presentation set of seven medals given to Henry Cole, all inscribed with his name around the rim. Henry Cole was Prince Albert’s Chief advisor for the Great Exhibition of 1851 and involved in all aspects of its management.

Bronze medal with obverse depicting relief bust of Prince Albert in profile, facing left, signed “W. Wyon, R.A.”. The reverse design depicts a terrestrial globe showing Europe and Africa, topped by a dove perched with outstretched wings. A banner across the globe reads “Exhibitor”. The whole is surrounded by a wreath of laurel branches.

'PRESENTATION. HENRY COLE, EXEC. COMMITTEE'
Inscribed around the rim of this medal

The Exhibitors Medal is one of the five official medals commissioned for the Great Exhibition of 1851 by the Royal Commissioners, and awarded on behalf of Queen Victoria. The medals, of varying size and design, were intended to confer prestige on the exhibition award. The medals were struck in bronze, considered by the Commissioners to be likely to constitute a lasting memorial, and be ‘better suited than any other for the development of superior skill and ingenuity in the medallic art’. This reflected the Great Exhibition’s mission of promoting British industry and trade through encouraging excellence in British design and manufacturing, and developing public taste.

A version of this Exhibitors Medal was awarded to around 14,000 exhibitors, accompanied by a certificate illustrated with a detailed engraving of the medal design, and a bound copy of the extensive Juries’ reports. The medals were mostly customised around the outside rim with the individual’s Country, Class number, and Catalogue Number; a considerable undertaking. Everyone who was not awarded either a Council Medal or a Prize Medal for their exhibit was presented with this smaller memorial to their contribution to the displays.

Other versions were included in prestigious presentation sets of all five official medals. These boxed sets were elaborately bound and gilded in the form of a book, and presented to the government of every country to take part in the ‘Great Exhibition of the Works of All Nations’, and to the members of the Royal Commission themselves. They were also presented to a number of other Senior Officials involved in organising the Great Exhibition.

This Exhibitors Medal forms part of unique presentation set containing 7 medals given to Henry Cole C.B. (Companion of the Order of the Bath, awarded to himby Queen Victoria at the close of the Great Exhibition). Each medal is inscribed with his name around the rim. Henry Cole was Prince Albert’s Chief advisor for the Great Exhibition of 1851 and a driving force behind the event’s conception and execution.

The obverse and reverse of this medal were designed by William Wyon R.A., medallist and Chief Engraver of the Royal Mint, who was awarded the private commission to strike all the official medals for the Great Exhibition. They were struck between hardened steel dies, a method able to produce large numbers of bronze medals without losing the intricate detail of the design. The dies used are in the V&A collections, donated in 1921 by the Royal Commissioners. Notably there are three sets of dies for the Exhibitors medal, probably reflecting the comparatively large number of this medal required for all the exhibitors. William Wyon’s illness meant that the official medals were not ready in time to be awarded and distributed at the closing ceremony of the Great Exhibition on 15th October 1851, and his subsequent death delayed their inscription and distribution. His son Leonard Charles Wyon fulfilled the rest of the commission. The Exhibitors Medal and the Services Medal were conceived by the Royal Commission later than the other three official medals, and were not included in the international competition held by the Royal Society of Arts in 1850 used to select the designs for the reverse of the Jurors, Prize and Council medals.

The Great Exhibition of 1851, or Exhibition of the Works of Industry of All Nations, was an international exhibition organised by a Royal Commission set up by Queen Victoria in 1850. This commission was actively presided over by Prince Albert, with Henry Cole playing a central role. The key aspirations of the Great Exhibition were to promote excellence in industry and the arts in Britain, and encourage foreign trade by presenting Britain and her colonies in an international environment. The exhibition was held in The Crystal Palace, a huge and cutting-edge building of glass and steel set up temporarily in Hyde Park. It lasted 141 days and was an extraordinarily popular national event, visited by an unprecedented proportion of the British population alongside many foreign visitors.

Around 17,000 exhibitors from Britain, her eleven colonies, and thirteen foreign countries displayed exhibits divided into four main categories reflecting stages in the manufacturing process: Raw Materials, Machinery, Manufactures and Fine Art. The Commissioners ensured half of the exhibition space was assigned to foreign exhibitors, and the prize awards decided by an international Jury. The event was intended to be a truly international cultural showcase and an example of collaboration between nations. The globe and dove depicted on the reverse design of this medal reflect this aspiration. 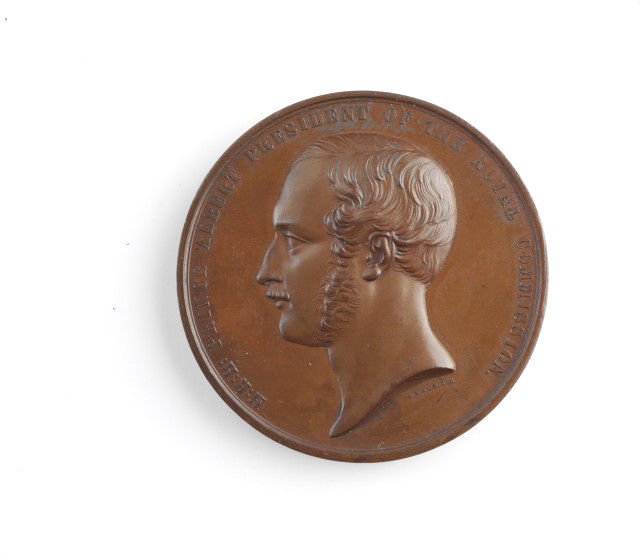