If you would like a larger file, or to use the image in other ways, contact our Licensing team.
Request to view at the Prints & Drawings Study Room, level F , Case SP, Shelf 1

Photograph
1986 (photographed), 2011 (printed)
Photographer Norman ‘Normski’ Anderson was born in Camden, Northwest London in 1966. He was bought his first camera by his mother at an auction when he was nine years old and by the age of eighteen he was working as a freelance photographer. His photographs include a personal record of community life in Camden when his mother and step father were living in Primrose Hill.

Normski’s mother, Cynthia Prescod, was born in Jamaica and moved to Britain while the country was still under colonial rule. The British Nationality Act of 1948 gave British citizenship to all people of the Commonwealth, recognising their right to work and settle in the UK by providing them with British passports. By 1981, after increasing restriction on migration from the former British colonies, the act was rewritten so that only people of British citizenship acquired by birth in the UK, descent or naturalisation had the automatic right to live in Britain. 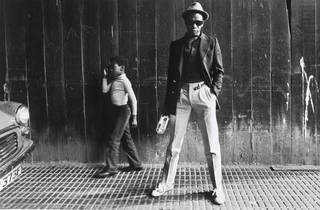 read Staying Power: Photographs of Black British Experience Working in partnership with Black Cultural Archives, we identified and acquired photographs taken by black photographers, or which document the lives of black people in Britain, taken between the 1950s – 90s.
Object details