If you would like a larger file, or to use the image in other ways, contact our Licensing team.
BETA
+18
BETA
+16
images
On display at V&A South Kensington
Design 1900 to Now, Room 76

Stereo System
1983 (made)
The Concrete Stereo, one of Arad's most important designs of the 1980s, is an iconic example of post-industrial aesthetics. With the realisation of electronics that were so small they no longer dictated the form of their housing, the production of home audio equipment became feasable, particularly as the parts could be bought as readymade elements. Arad chose concrete as the medium for this apocalyptic hifi, as a way of underlining its architectural character or to achieve a science-fiction look. 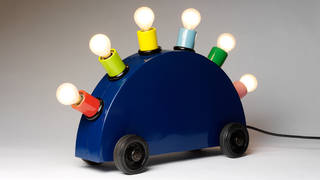