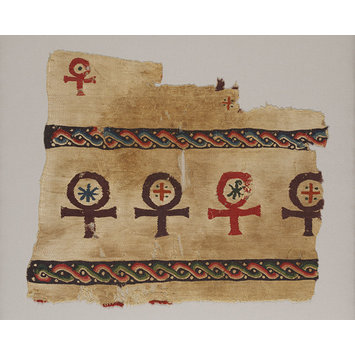 The Christian faith was preached in Egypt before the end of the first century AD, although its practitioners were persecuted as they were elsewhere in the Roman Empire. The Emperor Constantine officially recognised Christianity in the 4th century, and his successor, Theodosius, declared it the religion of the empire in 391 AD.

Different forms of cross were used symbolically in Christianity. One form was peculiar to Egypt, the crux ansata or ankh, the sign of life. This cross was Christianised from an Egyptian hieroglyphic. In Egyptian mythology, Osiris, the god of life, death and fertility, used the sign. He is said to have lifted it over the bodies of the dead in order to raise them to immortal life. As a result, the ankh came to be the symbol of life in Egyptian art.

Tapestry woven fragment, in coloured wools and undyed linen thread on yellow woollen warps. Looped crosses, ankhs, repeated in a horizontal row, between two straight purple bands with guilloche ornament in colours. Within the ankh are respectively the X P monogram, the X-form combined wtih a cross ( + ), and two crosses with dots in the angles. Above the upper band on the left is another looped cross, and further to the right is a small equal-armed cross with dots in the angles. There is a selvedge on the left, marking the limit of the cloth in that direction; there are the remains of twisted cord of red wool along the bottom.

The fragment is mounted on backing.

Slit tapestry weave in wools and linen on woollen warp

The Christian faith was preached in Egypt before the end of the 1st century, and suffered much the same vicissitudes as elsewhere in the Roman Empire. In the 4th century, Christianity was officially recognised under the Emperor Constantine (in 325AD) and his successor, the Emperor Theodosius declared Christianity the religion of the empire in 391AD. This object reveals the presence of Christianity through a combination of cross and monogram.

The ankh (looped cross) in red containing the monogram was probably in the middle of the object. The small cross above it was at the base of an ornament in purple, of which only a shred is now preserved.

Forms of cross
One form of the cross is peculiar to Egypt, the ankh or looped cross. It is the Christianization of the hieroglyphy ankh, or crux ansata, "the sign of life". Osiris, the Egyptian god of life, death, and fertility, is said to have lifted this sign over the bodies of the dead in order to raise them to immortal life, it thus came to be the symbol of life in Egyptian art. This cross was later used by the Copts because of its similarity with the sign of the cross, as the sign of redemption. It had Christian significance in Egypt as early as the 4th century. It was deliberately adopted by the Christians because of the ancient prophecy that Christian cults would disappear when the hieroglyphic sign for life was worshipped. It is also used in manuscripts, Gnostic papyri and on funerary stelae. On some textiles, like this, the crux ansata is surrounded by the alpha and omega; sometimes, its loop even contains the chrisma or Grecian cross.
This type of decoration, and the size of the fragment suggest that such weavings may have been used as altar cloths.

Monogram
From the 5th century onwards, a break with the classical Hellenistic style occurred and Christian motifs increased. The monogram of Christ was used in Egypt in both of the two principal forms in which it is to be found in early Christian art: the Constantinian form (a combination of the letters X P) first appears independently on works of art in the first half of the 4th century. It has been suggested that the monogram in this form is restricted to the period AD 323 to 493 but the monogram was used at Ravenna in the 6th century. The simple cross, with arms of equal length, was in use before the end of the 4th century.

From tomb at Akhmîm, Upper Egypt. 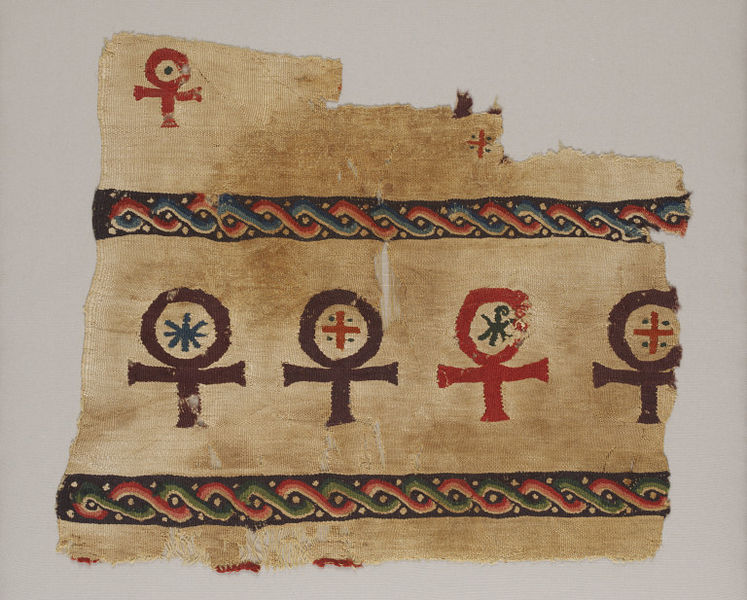