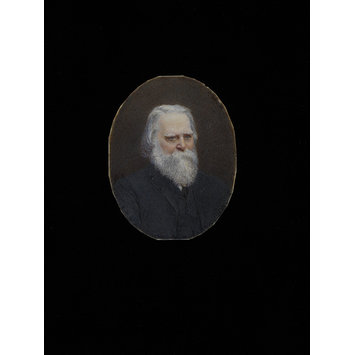 Miniature portrait by Rosalie Emslie, of an unknown elderly man, head and shoulders, against a dark brown background. The sitter has grey hair and full beard and moustache, and is wearing a black jacket and waistcoat.

Given by Geoffrey, Chloë and Emma Salter in memory of Miss Rosalie Emslie, daughter of the artist

Historical significance: This is one of ten miniatures by Rosalie Emslie acquired by the Museum from close family friends of the artist's daughter, also called Rosalie Emslie (Museum numbers E.486 to 495-2010). The miniature painter, Rosalie Emslie (also known at the time as Mrs Alfred E. Emslie), is recorded in Daphne Foskett's A Dictionary of British Miniature Painters, p.261; Foskett noted that she 'was a prolific artist and had a distinguished clientele'. The following biographical information has now become available:

'Rosalie Maria Emslie (nee Watson) 1854-1932. She was born in 1854 in St. Pancras. Her father, Henry Watson (b.1822) was a pewterer. Her mother was called Jane. Rosalie, who described herself as an artist and sculptor, had an older sister, Janie. After marrying Alfred Edward Emslie (1848-1918), a portrait painter and photographer, the couple had one daughter born in 1891 who they called Rosalie (who also became an artist). However, in the year that Rosalie was born, her mother was living with her baby at her parents' house in 43 Poland Street, St. James, Westminster. The family employed one servant. A decade later in 1901, Rosalie and her little girl were living with older sister Jane, who was described in the Census of that year as living off her own means. Their address was Castle Cottages, Otford, Kent. This was only a small cottage (which has since been Grade II listed) but the household had sufficient income to employ a servant of their own.'

On the Departmental File for these miniatures is a copy of The Crown magazine for May 25th, 1907, which on page 355 in a section called 'The Art Galleries', noted that at 'The New Gallery' there was on display a 'case of miniatures by Mrs Emslie, photos of which appear on this page [6 were illustrated]. Mrs. Rosalie M. Emslie, better known as Mrs. A. E. Emslie, wife of Mr. Alfred E. Emslie, A.R.W.S., studied at the RA, and is represented there this year by miniatures of Miss Ines Pini, Miss Ada Clarke, Rosalie Emslie [presumably her daughter], and Madame Melba. Her style is very delicate and refined, and the melting tones recall the beautiful work of Cosway. She takes her rightful place among our leading miniaturists...'.

This group of ten miniatures includes a self-portrait, two miniatures of the artist's husband, Alfred Emslie, as well as works painted on ivorine, a manufactured alternative to ivory, and a photograph of the same sitter in the same pose as in one of the miniatures (E.485-2010). Additionally, the Museum acquired the certificate for Rosalie Emslie from the Royal Society of Miniature Painters (E.484-2010), a society that was established in 1896 and ushered in something of a renaissance in miniature painting up until the end of the 1920s.

Miniature portrait of an unknown elderly man, head and shoulders, against a dark brown background, painted by Rosalie Emslie, England. 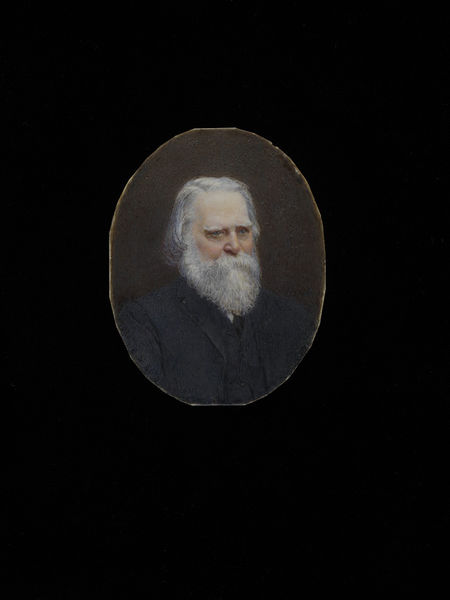