ca. 1913 (printed)
This poster by Georges Kugelmann Benda (1883-1954) advertised Andre Charlot's elegant revue Eightpence a Mile: The New Stop Press Review that opened at London's Alhambra Theatre in Leicester Square on 9th May 1913. The review was named after the newly-reduced fare charged by a London taxi driver for a London tour, and despite being a fourteen scene whistle-stop tour of London, looked highly exotic because of its costumes by the imaginative French designer Paul Poiret (1879-1944), scenery by the French designer Ronsin, and a Persian ballet i

The poster illustrates the Persian ballet The Flowers of Allah, somehow incorporated into its London theme, and starring the revue that starred the willowy dancer Phyllis Monkman as a shackled prisoner. Unlike many modern posters the image of this poster faithfully reproduced the scenery by Ronsin and one of Poiret's costumes. In keeping with the oriental theme, Benda used curved letter forms for his graphics, on everything but the title '8d a Mile'. The lines are clear and simple, with flat areas of colour contrasting with the more decorative footlight flowers and leaves of the tree. The poster was printed by David Allen & Sons, one of the most prolific printers of posters in the late 19th and early 20th centuries. 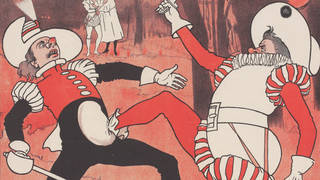