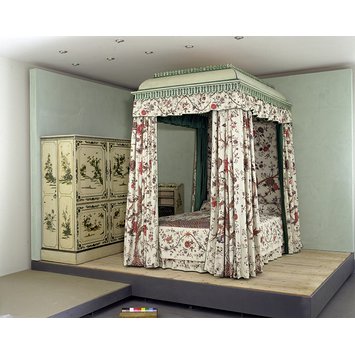 This four-poster bed takes its name from the celebrated actor and theatrical manager David Garrick (1717-1779). He commissioned it for his Thames-side villa. It was made in the workshops of Thomas Chippendale (1718-1779), one of the most influential British furniture-makers.

Chippendale’s interest in the newly fashionable Neo-classical style can be seen in the design and carved and painted decoration. The two front posts are carved as reeded columns with lotus capitals. Their bases are painted with paterae (flat circular ornaments) and husks (three short, flat leaves in profile, making a chain of ornament).

The bed cornice was identical to the cornice which divided the bedroom from the dressing room and to the cornices of the three windows. All these painted fittings were supplied by Chippendale. The decoration, inspired by Chinese wallpaper, was enhanced by the prospect of the couple’s garden with its mature willow tree.

The present hangings are reproductions made for display in the British Galleries which opened in 2001, but the original hangings are also in the V&A collection (museum numbers 17,18 & 19-1906; W.70I-1917),and one is displayed next to the bed. The original Indian chintz hangings were presented to Mrs Garrick in 1775 by friends in Calcutta. They were of dyed and painted cotton, made in Masulipatam, Madras, in an East India Company factory. On arrival they were were seized by British Customs' officials and David Garrick had to plead to recover them.

This bed came to the Museum by gift of H.E. Trevor, a descendant of George, brother of the original owner, the actor David Garrick. Some of the original hangings of the bed had been given to the Museum earlier, in 1906 (Museum nos. 17 to 19-1906) by Lady Hardman, who had bought them at the sale of the remaining Garrick material in 1864. These are of Indian chintz and are in the collections of the Asian Department.

The chintz elements of the bed had been celebrated well before they came to the Museum. On 1 January 1894 the weekly periodical Furniture and Decoration published a short note on p. 15:
'A Loan Exhibition was opened recently in Buckingham Palace Road, where there were shown "the first chintz curtains ever introduced into England", and that these "belonged to David Garrick". Garrick's death, says the Warehouseman and Draper, an event described by Johnson as eclipsing "the gaiety of nations", occurred in 1779: but we must go back more than another century for the introduction of chintzes into Great Britain. They were included as "printed calicoes" amongst the goods enumerated in the Royal proclamation in 1631, as those which might be imported from the East Indies. In 1699 an Act of Parliament made it absolutely illegal to wear East India chintzes, and in 1708, De Foe, in his Review, referring to the popularity of these fabrics prior to the passing of that Act, says: " The general fancy of the people ran upon East India goods to that degree, that the chintzes and painted calicoes, which before were only made use of for carpets, quilts etc., and to clothe children and ordinary people, became now the dress of our ladies... curtains, cushions, chairs and at last beds themselves were nothing but calicoes and Indian stuffs."

Museum negative 74591 shows this on display in Gallery 40 in 1936 as part of a display of Georgian furniture.

The closest comparison to the Garrick suite of painted furniture is the painted furniture supplied in 1774 to Ninian Home of Paxton House, Berwickshire. This is discussed and illustrated in David Jones, The Paxton Style, 'Neat and Substantially Good': Thomas Chippendale's Scottish Achievement (published by Paxton House in 2018 in association with the exhibition of the same title).

the old reproduction hangings from the Garrick bed pre-2001, in a packet. 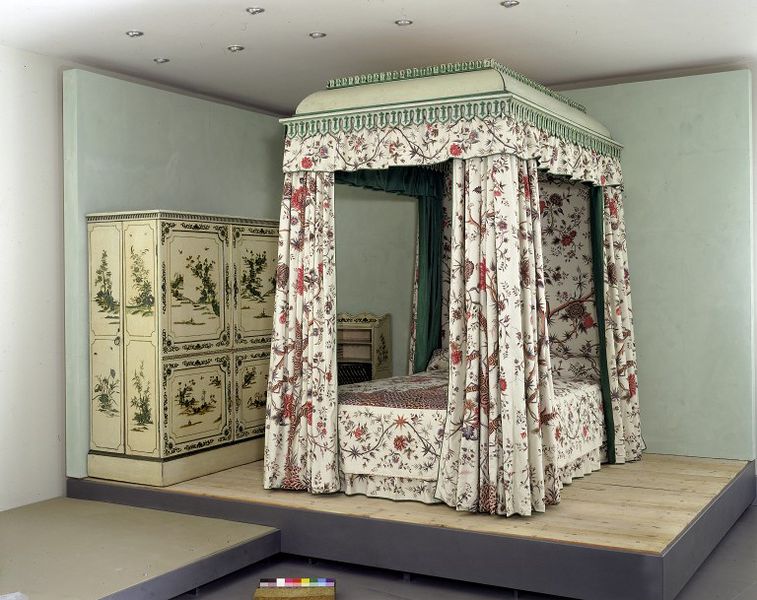