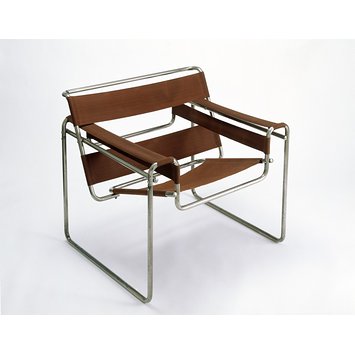 This chair - the first to be made of tubular steel - is regarded by many as the most important piece of furniture of the twentieth century. The metal frame was inspired by the frame of Marcel Breuer's bicycle, and he designed it while he was a Master at the Bauhaus. The steel frame appears to outline a cube, into which the seat and back have been inserted at an angle. There is no solidity to the chair and the seat, back and arms are simply lengths of cotton canvas stretched between the metal frame. The intersecting lines and planes that make up the chair achieve one of the most-sought after characteristics of the Modern interior: visual transparency. It also visually represented the idea and image of the machine, and of mass-production, although in reality most tubular steel chairs were made by hand in small batches.

Armchair made of nickel-plated tubular steel lengths, bent and visibly held together by screws, nuts and slot-in-connectors. Bands of red cotton canvas are stretched between the steel to form the seat, back and arms. (possibly original seat and back, replacement arms)

The seat and back are separate units in a frame consisting of four connected pieces of tubular steel, in which both pairs of legs are joined together to form parallel runners that serve as base. An additional individual tube screwed from the inside into both sides of the frame connects back and front just below the armrest and provides stability. At the front and back the frame is bent into a U-shape which is lower at the front where the seat is slotted in. The small horizontal top ends on either side are connected from back to front with a strip of canvas forming the armrests. The top ends of the frame's U-shapes are also connected with a strip of canvas from front to back marking the inner sides of the seat. A single U-shaped tubular steel frame open to the front and tilted towards the back with a wide piece of canvas stretching from one side to the other forms the seat. Just before the lowest point of the seat two L-shaped tubes are screwed to the seat frame forming part of the back. The L-shapes are extended and connected in an arch at the top behind the back Two pieces of canvas - one at the top and one in the lower part - stretch between the sides.
All pieces of canvas are tightly bow-taut and stretched in loops around the tubes and sown at the ends.

Following the move of the Bauhaus school to the city of Dessau, Germany, Marcel Breuer wanted to find ways to create modern furniture appropriate for its new buildings, which were under construction in 1925. Inspired by the strength of his own bicycle, he set about designing a first version of this metal chair. He used the diameter of the bicycle tube as a starting point and purchased lengths of seamless extruded steel tube, welding together a prototype with help of a plumber. The final product, with its pieces bolted rather than welded together, might be seen as a piece of modern sculpture which draws on the most up-to-date aesthetic ideas of the period, notably the Dutch de Stijl group but also constructivism as represented in the work of fellow Bauhaus teacher, Laszlo Moholy-Nagy. It is a construction of intersecting planes in space which enables one of the most sought-after characteristics of the modern interior: visual transparency which allows interior space to flow freely. In terms of its shiny metal surfaces and the implication that it was an industrial object, the chair is symbol of the modernist infatuation with the machine..In reality, most tubular steel furniture was made by hand in small batches.
The idea of metal furniture in the domestic interior, rather than outdoors, was a new and radical idea in the 1920s. This chair, and subsequent designs by Breuer and by leading architects of the day, became potent symbols of the avant-garde. At the Bauhaus, this chair was chosen for use in the homes of Bauhaus founder Walter Gropius and teachers Wassily Kandinsky and Moholy-Nagy.
Around 1960 the chair was manufactured by Gavina in Bologna, Italy, and marketed under the name 'Wassily' chair, a reference to Kandinsky who praised the chair when he saw in in 1925.
This version of the chair was originally owned by Dr Hermann Klumpp, a student at the Bauhaus and later a collector.

Historical significance: The chair is one of the most important furniture designs of the 20th century. It is the first tubular steel chair. Its conception and publication in contemporary magazines announced a revolution in modern design and the modern interior. Tubular steel furniture became the Modernist furniture par excellence.

Marcel Breuer was a student at the Bauhaus school in Germany, the most important design school of the 20th century. He became a teacher and master of the Carpentry Workshop in 1925.

Armchair, tubular steel with red canvas, designed by Marcel Breuer 1925-1926 and manufactured by either Standard Möbel or Thonet Möbel in 1927-1928, Germany

This is one of the most important furniture designs of the 20th century. Breuer made the prototype when tutor at the Bauhaus. His aim was a visual transparency that would allow a free flow of space and light – qualities that were essential to Modernist architecture.

In using tubular steel, Breuer found inspiration in his bicycle and practical help in a local plumber. The skeletal geometry and clear distinction between frame and ‘upholstery’ show a deliberate rejection of the traditional club armchair. [01/12/2012]

Made by either Standard Möbel, Berlin, or Thonet Möbel, Frankenberg, Germany 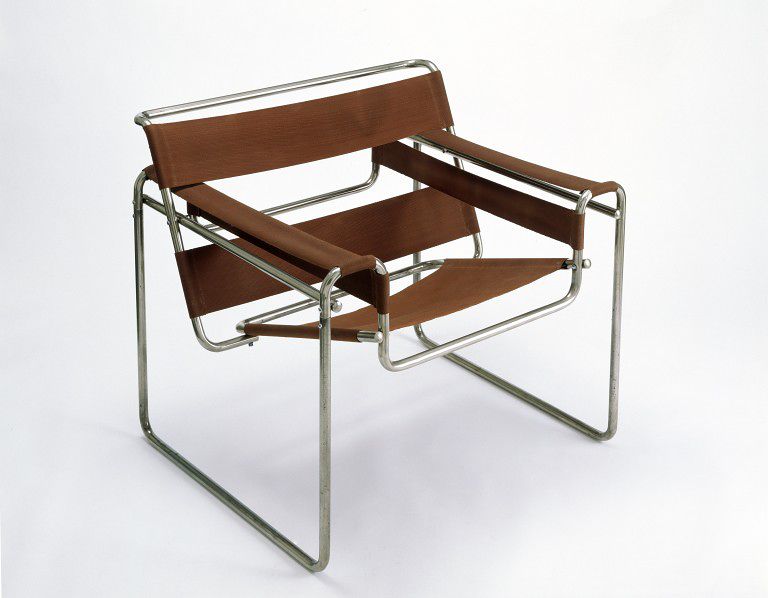