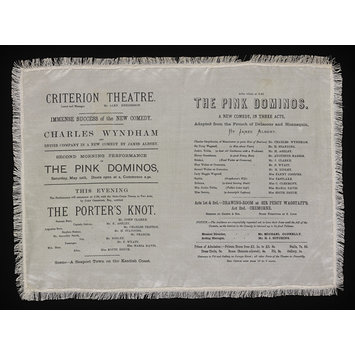 Silk and satin theatre playbills and programmes were produced from the 18th century onwards, to commemorate special evenings at the theatre. Most theatres in the 19th century would have had some made to mark grand openings or milestone performances. By the end of the First World War however the practice had generally died out, only being revived very occasionally, more often at London's opera houses than any other theatres.

This silk programme was produced for a performance of The Pink Dominos by Charles Wyndham's company at the Criterion Theatre, Piccadilly Circus, the intimate underground theatre that opened in March 1874 and which became known as one of the leading light comedy houses in London. Charles Wyndham (1837-1919) had made his name in London in 1866, playing in a burlesque at the Royalty Theatre. He was in his element in the type of risqué farces often adapted from French originals produced at the Criterion, including Doe and Rose's version of The Great Divorce Case, James Albery's The Pink Dominos and W.S. Gilbert's On Bail.

The Porter's Knot by John Oxenford featured John Clark as Samson Burr, Mr. H. Ashley as Augustus Burr, Charles Tritton as Stephen Scatter, Mr. Francis as Mr. Smoothly Smirk, Mr. Ridley as Bob, Mr. F. Wyatt as a Passenger, Miss Maria Davis as Mrs. Burr and Miss Edith Bruce as Alice. Tickets for the private boxes and the stalls could be purchased from the Libraries, and also from Mr Massingham at the Box Office. These cost 5/-for the Dress Circle, 4/- for a box, 2/- for the pit, 6d for the gallery and 6/- for the orchestra stalls. Private boxes cost £1.1s to £3.3s, Stalls 7s 6d, Dress Circle 5s, Boxes (Bonnets allowed) 4s, Pit 2s, Gallery 1s.

Silk programme for The Pink Dominos by James Albery, adapted from the French of Delacour and Hennequin, preceded by The Porter's Knot by John Oxenford, Criterion Theatre, 12 May 1877. Letterpress on silk. 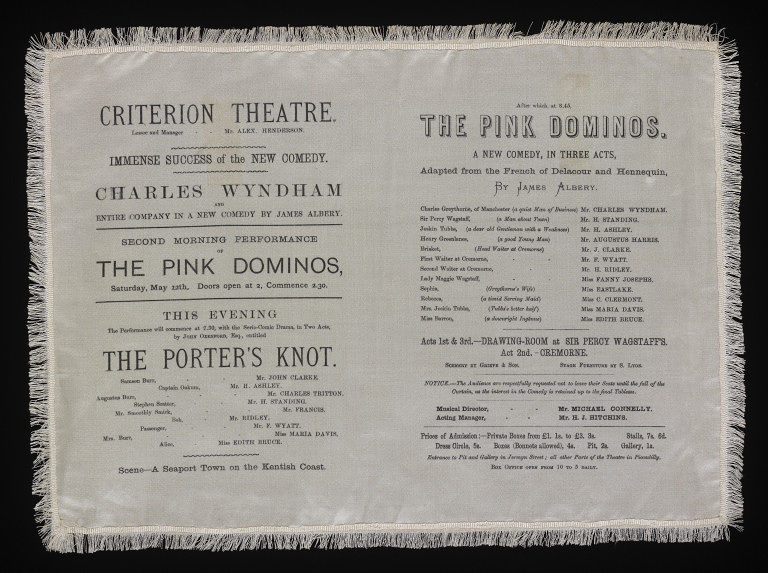