If you would like a larger file, or to use the image in other ways, contact our Licensing team.
Request to view at the Prints & Drawings Study Room, level F , Case X, Shelf 916, Box C

Photograph
1930 (photographed), 2004 (printed)
Claude Cahun is the pseudonym of Lucy Schwob (born Nantes 25 October 1894 – died Jersey 8 December 1954) who was a French photographer and writer. Describing themselves as 'neuter', the gender neutral pronoun 'they' will be used for the artist. Their work was both political and personal, and often played with the concepts of gender and sexuality.

They published articles and novels, notably in the periodical Mercure de France. Later, they associated with the surrealist group, and participated in a number of surrealist exhibitions, including the London International Surrealist Exhibition (New Burlington Gallery) and Exposition surréaliste d'Objets (Charles Ratton Gallery, Paris), both in 1936.

The prints that form part of the V&A's collection relate to the photomontage illustrations published in Cahun’s autobiographical essay, 'Aveux non Avenus' ('Disavowed Confessions') (Paris: Editions du Carrefour, 1930). The ‘half plate’-sized glass negatives used to re-photograph their montages were hidden by Cahun during the occupation of Jersey (where they settled with their partner, Marcel Moore, in 1937) and only rediscovered in 1971. No vintage prints of the images are known to survive and are only otherwise known in the original book form. Cahun is not known to have made platinum prints, preferring to use gelatin silver, and so the distinction that these are modern prints – made using platinum – is subtle but clear. These prints are not intended to be facsimiles of originals but rather to serve as a record of the negatives in the absence of any known vintage prints. 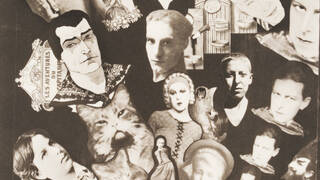 read Photographing masculinities: gender, identity and the gaze Historically, men's fashion has been subjected to strict rules and conventions, reflecting rank and identity. Today, ideas of masculinity are shifting in response to societal changes, questioning what it means to be 'male'.
Object details