If you would like a larger file, or to use the image in other ways, contact our Licensing team.
+3
+1
images
Not currently on display at the V&A

1917 (made)
Pablo Picasso’s costumes for his first ballet, Parade shocked the audience at its première in Paris on 18 May 1917. The Cubist elements of the managers’ costumes hinted at the disintegration of a world they knew, recalling the fractured cityscapes of war. Nevertheless the costumes for the ‘acts’ the managers’ introduced were more traditional. That for the Conjuror was inspired by music hall magicians, who frequently adopted a Chinese persona. The most famous was Chung Ling-Soo, an American who had begun his career in magic as Robinson the Mystery Man.
The Conjuror was danced firstly by Léonide Massine and subsequently (after Massine had been dismissed from the Ballets Russes) by Woizikowski. Both also danced the Chinese Conjurer’s solo in programmes as independent dancers (in music halls or as guest artists with other companies). This costume was probably a second version worn by Léon Woizikovski although the last owner, Serge Lifar inscribed the costume with the names Leonid Massine, Leon Wojcikowski and Serge Lifar.
According to information from Lydia Sokolova, Vassili (Diaghilev’s wardrobe master) gave the costume to Woizikowski after Diaghilev’s death. At that time Woizikowski was performing the solo in divertissement programmes including with Marie Rambert’s embryonic company. In 1958 Sokolova noted in a letter to Richard Buckle that during World War 2 Woizikowski in his native Poland ‘buried the costumes and other things in the ground in Poland. His home was burnt down, but he found the things intact.’ She commented ‘He has worn the Chinese dress very much and is going to Paris to try and sell [it].’ 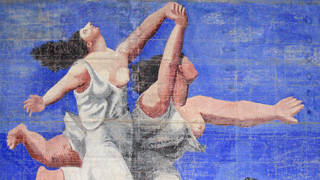 watch Conservation stories: Diaghilev and the Ballets Russes The V&A holds the largest collection of Ballets Russes costumes in the world. Jane Pritchard, Curator of Dance, and V&A conservation specialists take us behind the scenes as they prepare key objects, costumes and a giant stage cloth for display in the major 2010 exhibition 'Diaghilev and t...
Object details