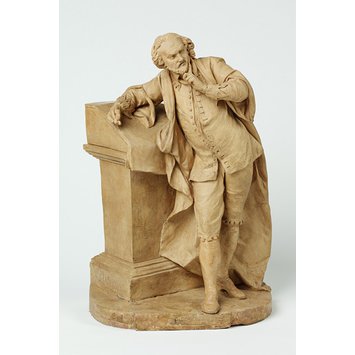 This terracotta statuette of Shakespeare was made by Louis François Roubiliac. Like preparatory drawings, sketch models are used by sculptors to record and develop their initial ideas. This is a preliminary sketch model for a marble statue made for the actor David Garrick and now in the British Museum. Garrick may well have posed for the figure. The head was probably taken from the earliest authenticated likeness of Shakespeare, the so-called Chandos portrait, of which Roubiliac had a copy.

Louis François Roubiliac (1702-1762) was one of the leading sculptors of his generation, and his busts and monuments are among the most important produced in Britain in the first half of the 18th century. He was born in Lyons, and probably trained in Dresden. He was later in Paris, but from 1730 he was based in London, apart from a brief visit to Rome in 1752.

The poet is represented standing at the moment of inspiration, his left hand, with forefinger extended, raised to his face, his right arm resting on a lectern. In his right hand is a pen (part missing). Signed on the left of the base.

Terracotta, made from modelled clay

At the sale of the property of Edward Stevens (architect), held on 7 February 1776, lot 38 is described as 'A terracotta figure of Mr Roubiliac's Shakespeare'. Noted on departmental records of having been purchased by Mr. A. Myers from the Henry Farrer Esq, F.S.A. sale (held at Christie's between 12 and 18 June 1866). Sold on the second day's sale, 13 June 1866, as lot 218, described as 'Shakespeare, by Corbett: a copy of the statue by Roubillac [sic]'. The annotated catalogue held in the National Art Library records it was purchased by Myers' for £2. Lots 221 and 222 in the same sale, described as models for a tomb in Westminster Abbey, were also purchased by Myers for 10s each. The Shakespeare statuette was purchased by the Museum from Mr Myers in 1867 lot £4 4s. A terracotta model by Rysbrack for the Locke monument was also purchased from Myers at this time. 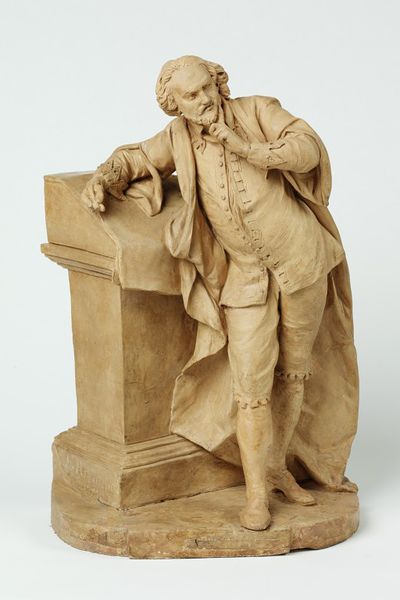