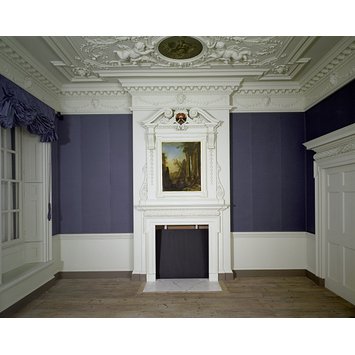 Object Type
This interior was built as a drawing room overlooking the street. Of the three doors opposite the windows, the central one is a false door, designed to create a sense of symmetry. Mythological heads of Ceres (goddess of the harvest) and Bacchus (god of wine) in the frieze are appropriate as the room was used for eating. This is an important example of an architect-designed reception room from a smaller London house of the mid-1720s. It is the only surviving example of a town house interior designed by the architect James Gibbs.

People
The street was named after Henrietta, wife of Edward Harley, 2nd Earl of Oxford, as the Marylebone estate where the house was built was acquired through this marriage. James Gibbs had also worked for the 2nd Earl's father, Robert Harley. Gibbs took leases out on four sites in Henrietta Street, nos. 5, 9, 10 and 11 and actually lived in no. 5 from 1731 until his death in 1754. This room is from no. 11.

Materials & Making
The five inset paintings, attributed to Vincenzo Damini, in the ceiling are executed in oil on plaster. The surrounding plasterwork was made by a team of Italian craftsmen. The door frames and overmantel are carved in wood. The door entablature is taken from the published designs of the Italian architect Andrea Palladio (1508-1580).

The shield in the pediment is charged with the arms of Allen, Per fesse gules and sable, a chevron rompu between three griffin heads erased ermine. This records the second family to occupy the house. According to the Marylebone Rate Books,Thomas Allen of Finchley took up residence in 1775 and the family remained there until 1799.

British Galleries:
This room was the main entertaining room on the first floor of a London house designed by the architect James Gibbs (1682-1745). He bought the leases of four plots in the new street, using one for his own house and three, including number 11, for houses for letting. Although the exterior of the house was plain, the ceiling of this room was elaborately decorated. The main panels may be by the Italian-born painter Vincenzo Damini, the plaster decoration by the Swiss-born plasterworkers who frequently worked with Gibbs. In the photograph number 11 is to the left of the house with the bay windows. [27/03/2003]
British Galleries period room book:
[ILLUSTRATION]
The Parlour from 11 Henrietta Street, London
1727-1732
[illustration of a detail of the ceiling]
11 Henrietta Street


The house was built between about 1724 and 1732 as part the Marylebone estate developed by Edward Harley, 2nd Earl of Oxford and Mortimer (1689-1755). The estate, which Harley had inherited through his wife, Lady Henrietta Cavendish-Holles, lay to the north of Oxford Street and extended as far as the Marylebone Road. Its centrepiece, Cavendish Square, was promoted as being convenient for both the court at St James's Palace and parliament at Westminster. Like Henrietta Street (now called Henrietta Place), many of the streets, such as Cavendish Square and Harley Street, were given family names or the names of titles or properties belonging to the family. [100]

Number 11 was built for the architect James Gibbs (1682-1754), best known for his design of the church of St Martin-in-the-Fields. Gibbs worked frequently for the Earl of Oxford and had designed the local church, St Peter's, Vere Street. He leased a site and built a house for his own use at number 5, as well as taking leases of three other plots to build houses as an investment. These included number 11, for which he designed this richly decorated room.
[80]

The room
Number 11 was a typically plain London brick house, with this room as its most elegant interior. It was on the first floor of the house, overlooking the street. The heads decorating the plaster frieze are decorated with corn and grapes, symbols of the Roman goddess of agriculture, Ceres, and the Roman god Bacchus who presided over entertainment and feasting. This suggests that the room was used both as a dining room and a sitting room. Such general use of rooms was standard in all but the grandest houses. [89]

James Gibbs enjoyed particularly close links with Swiss plasterworkers active in Britain from about 1720 and employed them frequently for his country houses and churches. He recognised their skills and left them free to create their own designs. For this ceiling the plasterers worked with a painter, possibly the Italian Vincenzo Damini (died in about 1749), who worked in Britain from about 1720 to about 1730. The arms in the overmantel are of the Allen family, who owned the house during the second half of the 18th century. The room has been decorated as it may have been in
the first years of their occupancy. [103]

The room today
The room consists only partly of original elements. When the house was demolished in 1956, the ceiling and some details of the frieze and cornice were removed, as were the carved wooden overmantel, the doorcases and doors. In the Museum the ceiling was re-erected and the frieze and cornice recreated by casting from surviving original sections. The windows, shutters and window seats, did not come to the Museum and the room was first recreated with three walls, as an open box. The overmantel is original but the chimney-piece below, which had been replaced in the 19th century, was reconstructed from a drawing by James Gibbs in the Museum's Print Room. [110]

In the current restoration the window wall has been recreated using evidence from surveys of the house in the 1950s. The room has also been set on a more appropriate floor, made of old pine planks of the authentic width for the 18th century. Such floors were not polished, but scrubbed with sand to keep them clean and light-coloured. [59]

Decoration and furnishing
The decoration was based on an analysis of the surviving paintwork and a survey of inventories of London houses of similar quality in the 1730s and 1740s. Although the woodwork had been stripped when the ceiling first came to the Museum, analysis showed that it was originally a light stone colour, with no colour and gilding except a thin gilt line around each of the paintings. [60]

Such simplicity suggests that the walls may have been hung with one of the plain woollen fabrics that were often used in place of silk, although none survives today. Glazed mohair, a fine wool fabric, was often mentioned in 18th-century inventories for wall hangings. This modern version was woven in Scotland from worsted (wool) yarns and mohair from Turkish goats. After weaving it was glazed by passing it through hot rollers, giving it the lustre of silk. In the 18th century blue ranked third in status, after crimson and green, and was an appropriate colour for a fashionable but not grand room.

The curtains are of lustring, a light silk frequently listed for curtains in the inventories of rooms where the walls were hung with mohair. This form of curtain, made to draw up and known as a festoon curtain, had been fashionable from about 1700. The curtains are lined with a lightweight wool known as tammy and are trimmed with silk braid and tassels made to 18th-century patterns. [165]

None of the furnishings is original to the room. They mostly date from 1730-1760 and illustrate some of the common features of rooms of that period, including the use of embroidered chair covers with additional case covers of woollen serge and the use of mahogany and walnut furniture together in the same room. [53]

THE WOODWORK AND PLASTER CEILING
1727-1732
The combination of modelled plaster with painted panels may have been a fashion that the architect James Gibbs learned to admire when he studied in Italy (1703-1709). The central panel shows Apollo, with Time Revealing Truth and Love Repelling Hatred. The four small panels represent the Arts.

Overmantel, doorcases and doors of painted pine; ceiling of moulded plaster with panels painted in oil on plaster
Designed by James Gibbs (born in Aberdeen, 1682, died in London, 1754); plasterwork probably designed and modelled by Giuseppe Artari (born in Arogno, Switzerland, 1692 or 1700, died in Cologne, Germany, 1769) and Giovanni Bagutti (born in Rovio, Switzerland, 1681, worked in Britain, 1709-1735); central panel probably painted by the Italian artist Vincenzo Damini (died about 1749, worked in London about 1720-1730) 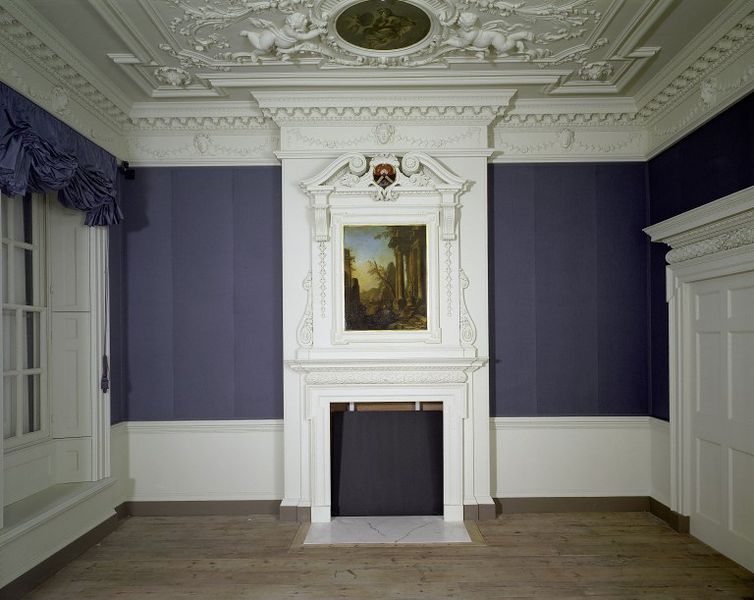