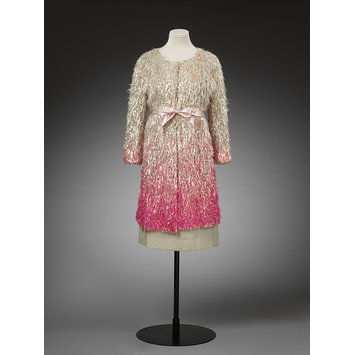 This ensemble is a good example of the work of the Spanish couturier Balenciaga (active in Paris 1937-68) in the 1960s when he actively fostered his interest in innovative textiles, simplifying the cut and construction of his clothes to make the most of the textiles. From his early days in Paris, Balenciaga's fascination with surface texture and pattern led him to patronise the important Parisian embroidery firm of Lesage. He was amongst the first couturiers to showcase some of Lesage's plastic creations: in this case, the disks in graduated shades of pink are made of melanex and shimmer as the wearer moves. Pink was ever present in the designer's oeuvre, in many variations from 'baby' pink to 'shocking' pink, but not within the same garment. Although the Baroness Rothschild, one of the couturier's most faithful customers, chose trousers to go with the coat, the coat had been presented in Balenciaga's show worn with a skirt that skimmed the knee.

T.38-1974 - The coat is entirely covered with cellulose acetate sequin feather shapes in white and graduated shades of pink, on a ground of pear shaped sequins and mother-of-pearl beads. It is three-quarter length, straight cut with a hook fastening at the round neck. The sleeves are three-quarter length.

T.38A-1974 - The trousers of pink poult taffeta are tapered wit a side zip fastening.

T.38B-1974 - The shoes (Vivier) of transparent PVC trimmed with pink PVC and white leather; they have chisel toes and low heels.

Worn and given by Baroness Philippe de Rothschild.

LAYERS OF CRAFTSMANSHIP
To create this precisely gradated design, the embroiderer has built up layers of beading on a piece of silk organza dip-dyed pink. The coat was constructed first. Then the coloured stitching was added (visible on the back), then white pearls (in a seemingly haphazard ‘vermicelli’ design), and then teardrop and pink feather-shaped sequins. Finally large pearls were added and Swarovski crystals. The nearby video shows embroiderers recreating the beading at Lesage today. 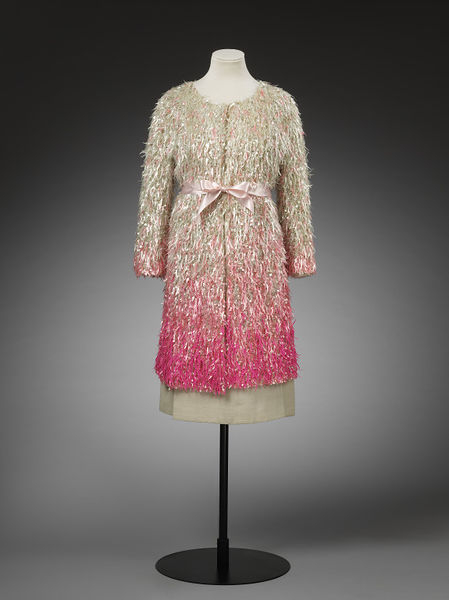