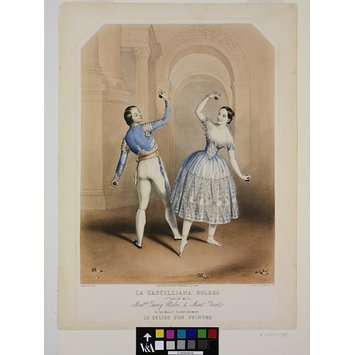 Le Délire d'un peintre was produced in London in 1843. It was a typical piece of Romantic ballet nonsense, about a painter (Jules Perott) who is in love with a dancer (Fanny Elssler), whom he has painted. The dancer pretends to be the painting come to life and haunts him 'mingling the most sparkling playfulness with the most deep-souled passion'. In the end they are married and the ballet ends with the spirited Castilliana Bolero.
Perrot's tight breeches and short bolero jacket, with elaborate decorations, and Elssler's bell-shaped skirt trimmed with flounces of lace would identify the dance as Spanish, even if they were not holding the obvious castanets. In 1836, Elssler had a huge success with a solo based on the Spanish dance, the Cachucha, and ever afterwards audiences expected a Spanish-style solo or pas de deux in her ballets, even, as in Le Délire d'un peintre, the story had nothing to do with Spain.

In a sand-coloured setting combining classical pillars and arches, stand two figures. To the left, a male dancer stands with his back to the audience, weight on his left leg, the right leg forward, with the feet turned out; his left arm is down and his right bent at shoulder level, his head turned to look past his right arm to his partner. In his hands he holds castanets. He wears white tights with garters around the knee, and a blue ruched ribbon down the outer leg; his Spanish-style jacket is blue with overlapping epauluettes and braid decorations in white; around his waist is a sash in white, black, yellow and red, tied in a tailed knot on the left waist. His partner, facing the viewer, mirrors his position. She stands on her left leg, foot turned out, with the right leg to the front and foot pointed; her left arm is down and her right bent from shoulder level and she turns her head to her right to look at her partner. In her hands she holds castanets. Her hair is severely dressed with blue ribbons hanging at the back and trimmed with flowers. Her off-the-shoulder blue dress has short sleeves and a pointed bodice with white point lace around the neckline and a white decorative panel down the front. From lower hip level of the bell-shaped, below-the-knee skirt is a deep band of pointed lattices interspersed with hanging decorated 'strings'; around the hem is a similar, shallower band. On the ground are flower sprays.

Le Délire d'un peintre was a divertissement produced in London in 1843. It was a typical piece of Romantic ballet nonsense, about a painter (Jules Perott) who is in love with a dancer (Fanny Elssler), whom he has painted. The Castilliana Bolero formed the climax to their wedding celebrations.
The print is part of the collection of dance prints amassed by Marie Rambert and her husband, Ashley Dukes in the first half of the 20th century. Eventually numbering 145 items, some of which had belonged to the ballerina Anna Pavlova, it was one of the first and most important specialist collections in private hands.
Rambert bought the first print as a wedding present but could not bear to give it away. As the collection grew, it was displayed in the bar of the Mercury Theatre, the headquarters of Ballet Rambert, but in 1968, Rambert gave the collection to the Victoria and Albert Museum; seven duplicates were returned to Rambert, but these are catalogued in Ivor Guest’s A Gallery of Romantic Ballet, which was published before the collection came to the V&A. Although often referred to as a collection of Romantic Ballet prints, there are also important engravings of 17th and 18th century performers, as well as lithographs from the later 19th century, by which time the great days of the ballet in London and Paris were over.

The large souvenir prints of the Romantic ballet, issued in the 1830s and 1840s, are among the most evocative images of dance in the 19th century. Lithography, with its soft quality, enhanced by the delicate yet rich hand-colouring, was ideally suited to the subject - the ballerinas who dominated ballet in the mid-century and the romanticised settings in which they performed; style and subject were perfectly matched. The lithographs produced in London are notable for capturing the personality and style of individual performers in a theatrical setting. They are a fitting tribute to one of ballet's richest periods.
Before the development of colour printing, the basic black and white prints were hand coloured. There is often considerable variation from one print to another, both in colour and quality of the work. The most important souvenir prints, such as this one, would only have been sent out to the best colourists, and it is often very difficult to tell the best hand colouring from early colour printing. In the days before photography, such lithographs were expensive souvenirs, bought by the individual dancer's admirers. 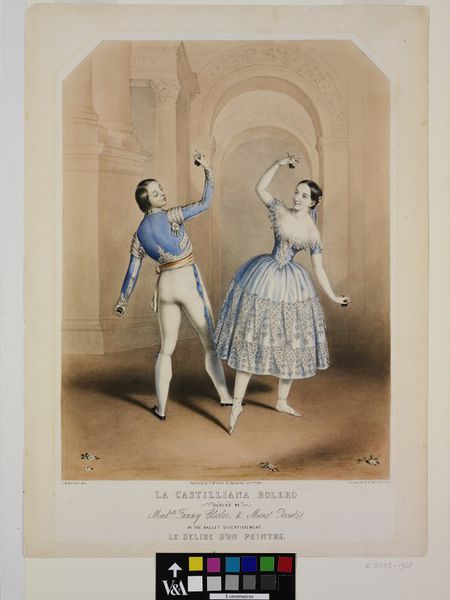