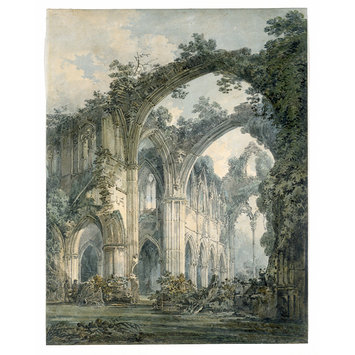 Turner exhibited this study of Tintern abbey at the Royal Academy in 1794. A few years later, these ruins also became a subject for the romantic poet William Wordsworth.

Watercolour and graphite pencil, with some bodycolour, on paper

JMW Turner was born Covent Garden, London, 23 April 1775, son of a barber. Turner entered RA Schools in 1789. His first exhibited works at the Royal Academy were watercolours of architectural subjects. He had already gained experience as an architectural draughtsman, working for Thomas Hardwick and Thomas Malton. However his ability to delineate the different architectural surfaces of Turner’s early watercolours shows the artist’s awareness of the oeuvre of Michael Angelo Rooker. Turner was a member of the circle of artists that formed in the home of the collector Thomas Monro. Probably from 1794, Turner was employed by collector Thomas Monro in completing drawings in his ‘academy’. This practice consisted of copying drawings by artists including J. R. Cozens, Dayes, Henderson and Hearne. Here Turner collaborated with Girtin, who produced tracings of artist’s drawings, by tinting them. Farrington records that Turner worked in Monro’s ‘academy’ for three years.

In 1791 Turner made his first extensive sketching trip. This was the first of what would become almost annual trips outside of London in which Turner would gather material for subsequent works. He recorded his visits through detailed pencil sketches, producing over 10,000 during these tours. He rarely painted directly from the motif in watercolour, stating in 1819 ‘that it would take up too much time to colour in the open air’ when he could make ’15 or 16 pencil sketches to one coloured’. Most of his watercolours were developed instead from these pencil sketches once the artist was back at his studio.

In the early nineteenth century Turner began producing prints. Between 1807 and 1819 Turner published the first issue of the Liber studiorum which consisted to a series of mezzotints after his own designs. Other print enterprises included volumes of engravings of the great rivers of Europe, whilst his Picturesque Views of England and Wales was his last major topographical publication.

In a long and exceptionally distinguished career, exhibited 259 works at the Royal Academy between 1790 and 1850 and 17 at the British Institute between 1806 and 1846, predominantly landscapes, sometimes with historical themes. He is generally considered the greatest painter in the history of British art. Turner died at Chelsea, London, 19 December 1851 and was buried in St Paul's Cathedral. He bequeathed his extensive collection of oil paintings and watercolours to the nation, now principally housed in the Clore wing of the Tate Gallery.

Tintern Abbey was a Cistercian house founded during the reign of Henry I in 1131. Destroyed during the Reformation, its ruins are situated on the welsh bank of the river Wye, an area of known outstanding beauty. Turner sketched the abbey during his first tour of Wales in 1792. His preliminary sketch for the view still survives and is housed at the Tate (T.B.XXIII-E). There is a second watercolour version of this view, also housed at the Tate (T.B.XXIII-A), which was probably made as a preparatory study for that in the V&A. The V&A version of this composition was exhibited at the Royal Academy in 1794 (no.402).

This watercolour shows the chancel and crossing of the Abbey. Here Turner’s observation of the forms and structure of the abbey reflect his training under Thomas Malton. The viewpoint of the composition allows Turner to explore the planar and spatial relationships of the walls and the dynamic rhythms of the arches. By filling the composition with the ruins of the the chancel and crossing Turner emphasises the mass of the architecture. This is strengthened by placing the ruin in the foreground of the composition to emphasise the grandeur of it. Such reaction to the ruin follows contemporary ideas of the sublime.

Tintern Abbey and its environs was a popular tourist destination at the end of the eighteenth century. This was increased through publications such as the Rev. William Gilpin’s Observations on the River Wye (1782)and William Wordsworth’s poem Lines Composed a few miles above Tintern Abbey (1798). Visitors to the site where impressed with the way that nature had taken over the ruins, thus enhancing its picturesque beauty. This can be seen in Turner’s awareness of the sheer variety of contrasting surfaces in the building which work to emphasise the dynamics of the building underneath. The short interlocking strokes used in the foliage reflects the work of Hearne while the keen observation of surfaces responds to the work of Michael Angelo Rooker, whose work Turner was influenced by in the early 1790s. The darkening of the palette reflects the work of Girtin, with whom Turner was working closely at this time. 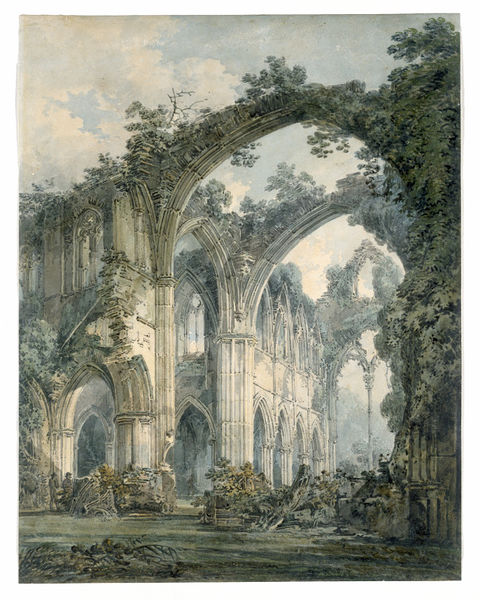