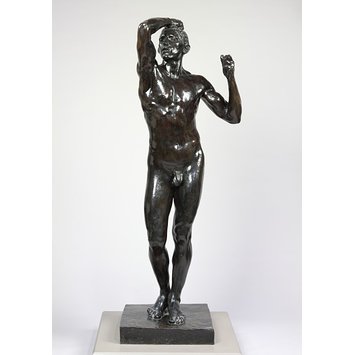 The Age of Bronze (L'Age d'Airain)

This statue brought Rodin to the attention of the public, not just in France but internationally. It is Rodin's earliest full-scale, independently produced statue to have survived. He started work on the figure in 1875 when he had left Paris to live in Belgium following the Franco-Prussian War. Rodin began using the model, Auguste Neyt, a 22 year old soldier from barracks near to his home in Brussels, in October 1875. While working on the figure he visited Italy for the first time, in Spring 1876, where he was profoundly influenced by Michelangelo and the works of classical and Renaissance sculptors which he sketched extensively.

The dating of Rodin’s works is not always straightforward. In catalogues, usually the date of the original plaster is given (ie when the statue was conceived and first appeared), though the bronze in question was cast later. The original sculpture of this figure in plaster (almost certainly destroyed) was first exhibited at the Cercle Artistique in Brussels in January 1877 (so perhaps dates from ‘about 1876’, allowing time for it to have been transported to Brussels for display in January 1877), but it did not have a title then which in itself caused confusion and controversy. Most wounding to Rodin were repeated accusations, due to the very life-like appearance of the figure, that it had been cast directly from life, rather than being freely modelled. Criticism was also made of the 'low type' of model chosen, which needed 'a little more nobility in the head, a little less thinness of the lips'. The statue was first called ‘The Age of Bronze’, still in plaster, when exhibited at the Paris Salon in 1877 (no 4107).

The first bronze of the figure was cast by Thiébaut Frères in May 1880, commissioned by the French Government, marking official acceptance of the work. It was set up in the Luxembourg Gardens in 1884 (and is now in the Musée d’Orsay, Paris). After this, the original plaster was returned to Rodin as it was too fragile to be used again, and he made new plasters, probably from the original mould. A few of these still survive (eg in Cognac, Dresden, St Petersburg, Budapest).

Thereafter more than 50 versions of ‘The Age of Bronze’ have been cast in bronze, of which at least 26 in Rodin’s lifetime (and others subsequently, by approval of the Musée Rodin, following the terms of Rodin’s wishes). Six casts are in public UK collections. The earliest bronzes are in Paris (1880), Prague (1900), Tokyo (1901), Copenhagen (1901), Berlin (1902), Essen (1903) and other locations in Europe. The earliest in the UK is at Leeds City Art Gallery (1905, originally acquired through John Tweed). The exact date of the V&A cast is not known, but was clearly before July 1914 when it was exhibited in London.

The V&A statue could be catalogued and described simply as ‘The Age of Bronze, 1877’. Underneath could be added, ‘sand cast, Alexis Rudier, before July 1914’.

Given by Rodin in November 1914

This is Rodin's first large sculpture. It was influenced by his admiration of Michelangelo, especially his Captive Slaves. When first exhibited in 1877 the untitled plaster caused great controversy as critics assumed it was a life cast. Later its power and anatomical realism were acknowledged. [March 2007] 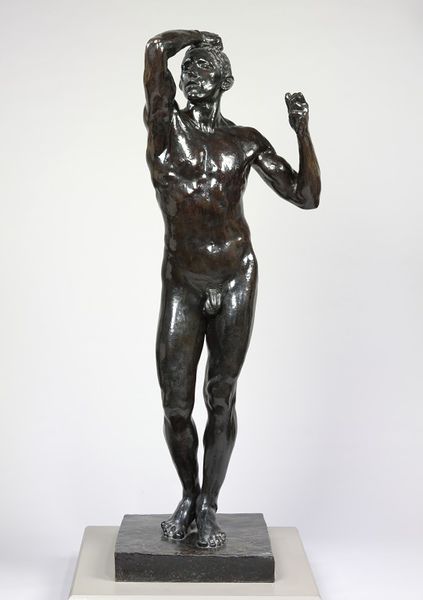