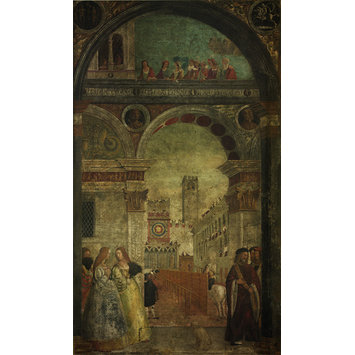 A Tournament at Brescia

This is the largest of a series of at least 17 frescos painted by Floriano Ferramola in Palazzo Calini at Brescia. The painting shows a tournament in the Piazza Grande in Brescia, an entertainment that became customary in Brescia from the 1480s onwards. All around, peering from balconies, loggias and balustrades, is a crowd of spectators waving banners. In the background are the loggetta and the clock tower with the wall of the Cittadella Vecchia and the Tower of the Broletto on the right. In the foreground are men and women dressed in typical late 15th-century costumes. Here the insistence of the architectural elements derives from the Lombard taste for magnificent architectures shown in deep perspective.

The Piazza Grande, Brescia, with jousters poised to start their charge and all around, peering from balconies, loggias and balustrades, a crowd of spectators waving banners; in the foreground are three elegantly dressed women on the left and three patricians on the right, while a dog and a monkey stand in the middle.

Historical significance: This fresco transferred on canvas was originally depicted by the Brescian painter Floriano Ferramola in the Palazzo Calini, in vicolo Borgondio, Brescia, and may have been commissioned by Mariotto Calini between 1508 and 1514. His initials ‘Mar Cha’ appear along the top of the wall and the Calini’s arms, a ladder, in a frieze as well as on the shield held by the triton in the left semi-lunette of 8878-1861. This device of a ladder in Calini’s coat of arms may be a punning reference to the word Scalini, ‘steps’ in Italian. The attribution, widely corroborated by local historical sources, was further confirmed by the recent finding, after restoration, of a scroll inscribed with the words [O]PUS/FLORIANI/FERAMOLA from small areas of fresco still visible in situ.

The V&A fresco forms the largest detached panel of a large decorative scheme which originally included friezes of playful putti, dolphins, festoons and grotesques, and at least 17 other scenes (E. Lucchesi Ragni, 1995). Four 4 are currently in the Pinacoteca Tosio Martinengo, Brescia:
-Betrothal
-Myrrha and Cinyras
-Hunt with falcon
-Birth of Adonis

Four other fragments are missing, but are known through documents (Stefano Bardini’s photographic archives):
- A Woman begging
- Two Women
- A Battle
- A Falconer

8878-1861 shows a tournament scene on the Piazza Grande (nowadays Piazza della Loggia, main square of the city) with the central arch of an ‘all’antica’ loggia which frames the scene. In the middle distance Ferramola has depicted the square jousters poised to start their charge. All around, peering from balconies, loggias and balustrades, is a crowd of spectators waving banners. In the background are the loggetta and the clock tower, presumably decorated by Ferramola himself (if so, this scene may include a discreet self-advertisement). The Loggetta is adorned with the coats of arms of the past Venetian governors of Brescia whereas the lion of St. Mark was removed and sent to Milan by order of Louis XII in order to eradicate visible traces of the Venetian regime (Bona, 1997).
Under the loggetta’s arcades Vincenzo Foppa (c.1427-c.1515) had painted the Justice of Trajan, now destroyed. On the right hand-side is a foreshortening of the Citadella Vecchia’s wall and the tower of the Broletto in the distance. A similar view was executed in inlaid wood by Damiano Zambelli (act. 1520-1549) after cartoons by Bramantino (ca. 1460-1530), Bernardino Zenale (ca. 1464-1526) and other artists, currently preserved in the Church of S. Bartolomeo, Bergamo.
The women in the fresco are dressed in a typical Northern Italian style, their hairstyles and clothes recalling Leonardo’s Isabella d’Este in the Louvre, Paris. Two of them hold a ‘spazzola’, a fan made of feathers, which appears in other representations of 16th-century noble life.

The scene has been said to record the celebration given in honour of the visit, in 1497, of Caterina Cornaro (Fenaroli, 1877 and Lechi, 1974), Queen of Cyprus, to her brother Giorgio who was then Podestà of the city (its Venetian governor). Fenaroli (1877) identified the joust with that of 1497, and Caterina as one of the women on the left and her brother as the bearded old man on the right (wearing a formal robe with wide sleeves ‘alla dogalina’). This proposal seems fanciful, as there is no documented relationship between the Calini and the Cornaro, and neither Caterina’s features nor her brother’s resemble those in the fresco. However, Ferramola may have witnessed the 1497 joust, and recalled it in this representation of a tournament.
Another hypothesis is that the fresco could represent the tournament to celebrate the betrothal of a member of the Calini family, as shown is another fragment representing a betrothal scene. An account of 1511 (see Pasero 1958, pp.56, 75 note 203) reports a lavish wedding celebration of a woman of the Calini family, which suggests that their finances survived the depredations of the French invaders (The sack of Brescia by Gaston de Foix took place in 1509). Mariotto Calini had inherited the building in 1508, at the death of his father Tonino. Although the date of Mariotto’s wedding is not known, it may have occurred shortly before the birth of his first son in 1514. The dog and monkey in the foreground are common accessories in scenes of banquets and spectacles, but are also often associated with the theme of love as a game (Thomas 1999, p. 13, note 42; Janson 1952, pp. 174, 279).
Brescia’s main square was the principal location for such events during a period in which the city rivalled Milan as a principal Italian centre for the manufacture of arms and armour. The first joust was held there in 1441 in honour of Francesco Sforza, future Duke of Milan (Bona 1997, p. 151) and tournaments held there became customary from the 1480s onwards.
The whole decorative scheme is a fine example of the Lombard classicism in which are combined architectural elements (both real and painted) typical of the Renaissance, classical sources such as Ovid’s Metamorphoses and emulation of the Northern school through the transposition of the monkey from Durer’s engraving, made by Giovanni Antonio da Brescia, The Virgin and Child with a monkey (Bartsch VII.60.42) as well as the triton in the upper left lunette of the loggia transposed from Nicoletto da Modena’s print (Hind 11) (Buganza, 1998).
Furthermore the taste for ‘all’antica’ decoration is typical of the period. In the late 15th century, Roman inscriptions were unearthed in Brescia and displayed on the façade of public buildings. Such archaeological ‘spolia’ informed a local humanist tradition, and was influential on artists. Similar decoration ‘all’antica’ appears in a late Quattrocento frieze in the Palazzo Maggi-Gambara. In the 1520’s, at the Palazzo Arco in Mantua, Giovanni Maria Falconetto elaborated further on this theme, decorating a Zodiac Room with an exaggerated architectural frame, abounding with similar antique motifs which represent the twelve signs of the Zodiac.

The dating of the fresco’s cycle is still subject to debate. It was initially dated 1512 by Francesco Gambara (1820, p. 249-250) more recently confirmed by Gaetano Panazza who noted signs of the Emilian classical style of Lorenzo Costa (1460-Mantua) and Francesco Francia (ca. 1450-1517) whereas Roberto Longhi as well as Mina Gregori followed by F. Frangi and S. Buganza believe that the cycle is to be dated around 1517-8 because of its similarity with Boccaccino’s Meeting at the Golden Gate in Cremona Cathedral, which was executed around that date. More recently Massimiliano Capella (E. Lucchesi Ragni, 2006) stated that Ferramola’s Palazzo Calini frescoes show a considerably more complex painting style than those of his signed and dated works from between 1513 and 1522 and proposed an early date between 1510 and 1512. However it can hypothesised that Ferramola was assisted in the elaboration of his iconographic programme by a local humanist, a fact that would explain the relative complexity of the decoration. Ferramola could have therefore executed the frescoes at later date even though his other works look in the whole less elaborate.

Fresco painting is among the most complex projects undertaken during the Renaissance. This technique, i.e. painting on wet plaster, originated in the Antiquity (see the surviving fresco of Pompeii, near Naples, destructed during the eruption of the Vesuvius in 79 B.C.), was reintroduced and developed in the late 13th century and the 14th century particularly in the work of the Isaac master, Giotto and his followers and perfected during the Italian Renaissance, culminating in Michelangelo's technological tour de force in the Sistine chapel, Rome (1508-12). This medium was used to decorate large wall areas of both private and public buildings. Such sizable paintings, in which timing was of critical importance, took careful planning and involved a number of assistants. A precise plan in the form of a drawing or of many drawings was required so that the composition would fit exactly on the wall. The artist could draw directly on the wet plaster (this underdrawing technique is called sinopia) or use cartoons (from the Italian word cartone) from which the composition was then transferred onto the wall. Another method of transfer, used especially in the 17th century for vast ceiling frescoes, was squaring, which replaced the time-consuming and costly cartoon technique.

A Tournament at Brescia, by Floriano Ferramola, about 1511 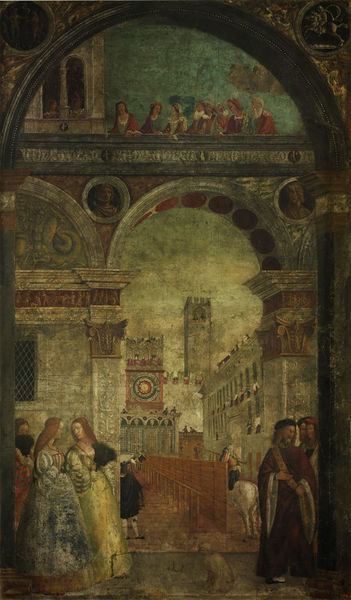