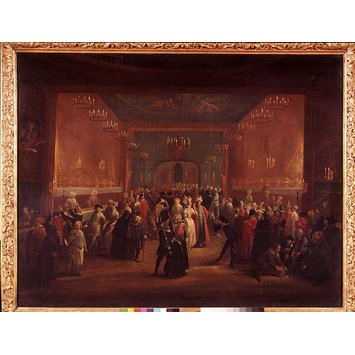 A Masquerade at the King's Theatre, Haymarket

Giuseppe Grisoni (1699-1769) was born in Mons, Flanders but studied in Florence under Tommaso Redi (1665-1726). He went to London with the painter John Talmann (1677-1726) but in 1728 he returned to Florence where he remained until 1740, teaching there at the Academy. He mostly produced portraits and history paintings, a great amount of which can be found in Cambridge, London and Florence. In 1740 he went to Rome where he spent the rest of his life.

This painting was attributed to Grisoni on the ground of a quote by George Vertue in 1724 but does not really reflect Grisoni’s art of painting, which tends to be highly finished and detailed. The scene represents a masquerade in the King’s Theatre in Haymarket, a popular event during the 18th century that imitated bigger events such as the Venetian carnival.

In a ball room with chandeliers, many characters wear fancy dresses, while on each side banquet tables are set with cakes.

Historical significance: The picture has been attributed to Grisoni because of a remark by George Vertue (Vertue Note Books vol. 14 B.M. 16; Walpole Society, Vertue III, p. 20): 'Mr grisoni painter of Florence… has made a fine picture representing the masquerade with various habits'. The entry is dated May 1724.
This painting shows indeed a masquerade on the stage of the King's Theatre in Haymarket, an opera house built by Sir John Vanbrught in 1704-05. Masquerades were popular events during the 18th century and imitated, in a smaller scale, the most famous Venetian carnival during which people explored cheerfully the creative potential of masking. One can recognised indeed among many others such characters as Harlequin, a sultan, and a cook. This kind of event started to be held in the King's Theatre from 1711.
Although several variants of this compositions are known: one in the collection of Lord Tollemache in 1958, another in the collection of Sir Robert Sitwell in 1949, and a third sold at Sotheby's London 17 Jul 1985, lot 69, this picture stands out from the usual highly finished and smoothly painted work of Grisoni who specialised in portraits, landscapes and history paintings.
Moreover this type of picture corresponds to a common trend in the production of such Venetian artists as Antonio Joli (ca.1700-1777) or Marco Ricci (1676-1730) and could therefore be the work of an English imitator.
One or other version must have however been known to Hogarth when he produced his satirical Masquerade Ticket in 1727.

'Genre painting' describes scenes of everyday life set in domestic interiors or in the countryside, especially those produced by 17th-century Dutch painters such as Gerard ter Borch, Jan Steen, and Pieter de Hooch. These subjects were not particularly popular with Italian artists before the 18th century. Even then, Italian genre painting is mainly restricted to works produced by Northern artists active in Bologna and the Veneto such as Giuseppe Maria Crespi (1665-1747), Giovanni Battista Piazzetta (1682-1754), Pietro Longhi (ca. 1701-1785) and Giacomo Ceruti (1698-1767). In this pre-Enlightment society, issues of social class, the legitimacy of power and the needs of common people were beginning to be discussed in Holland, England and France and the debates were slowly filtering down to Italy. Bolognese intellectual life was particularly active and Crespi, who was corresponding one of the most notable academics, Antonio Muratori (1672-1750), appears to have created a visual response to these debates. The works of the Bamboccianti, mostly Netherlandish painters specialising in low-life paintings, painted in Rome in the mid 17th century, may also have provided a source for Italian genre painters while the commedia dell'arte profoundly inspired Crespi and the development of this new Italian version of genre painting. From Bologna the genre spread to Venice thanks to Venetians artists such as Piazzetta and Longhi. They drew the attention of foreign collectors, most notably Joseph Smith the British Consul in Venice, who amassed an impressive collection of such artworks and of Venetian art in general and contributed to the growing taste for these in England.

A Masquerade at the King’s Theatre, Haymarket
About 1724

The King’s Theatre was designed by Sir John Vanbrugh and opened in 1705. It was intended as an opera house, but by 1711 the manager John James Heidegger had discovered that masquerades were far more profitable. The hundreds of candles posed a great risk in the days before electricity, and many theatres were destroyed by fire. [56 words]

On the site of the present Her Majesty’s Theatre, Haymarket, London
Oil on canvas
Possibly by Giuseppe Grisoni (1699–1769) 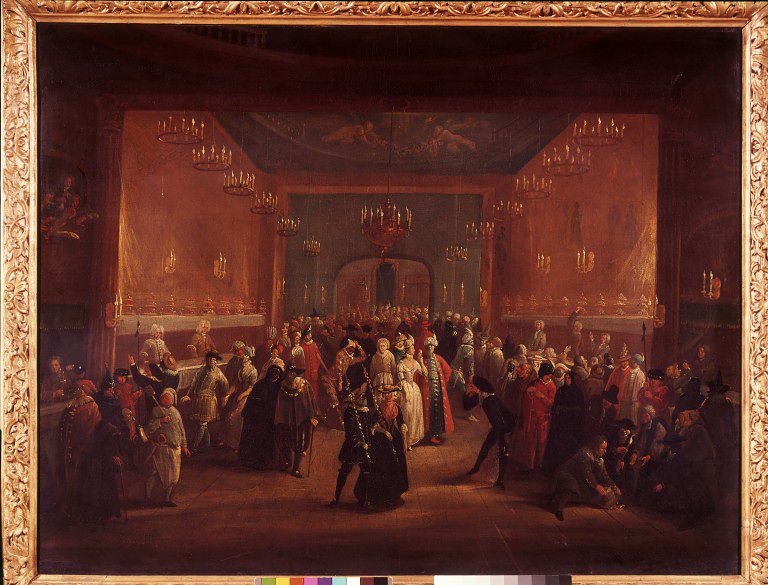