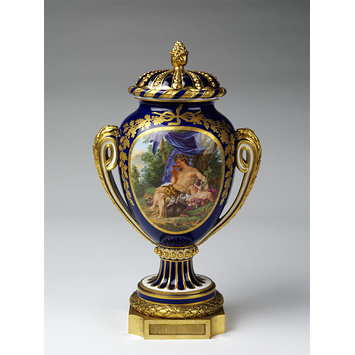 In the eighteenth century, vases were often displayed on furniture or chimney-pieces, usually in front of a mirror. Rosalind Savill, in her catalogue of the Wallace Collection Sèvres porcelain states in her introduction that Louis XVI's inventory of porcelain at Versailles shows Sèvres in most rooms, including sets of vases, or garnitures, as they were known. This model has been identified by Rosalind Savill as 'vase à couronne' or 'vase à ruban' in the Sèvres factory records. It was produced from about 1764.

This pair of vases was among eighty-nine pieces of Sèvres porcelain bequeathed with a collection especially rich in eighteenth-century French decorative art by John Jones in 1882. As the handbook to the Jones Collection stated in 1883: "Suddenly ... a collection has been given ... which contains the very objects so much to be desired, and, as it seemed a year ago, so hopeless of attainment." A military tailor who made his fortune during the Crimean War, Jones (1799-1882) started collecting seriously in the 1850s, sharing a taste for luxury objects of the ancien regime with aristocratic collectors such as the fourth marquess of Hertford and Sir Richard Wallace (founders of London's Wallace Collection), John Bowes, and Baron Ferdinand de Rothschild. William King, in his catalogue of the Jones Collection (see below) of 1924 relates that these vases were formerly in another famous collection, that of Ralph Bernal ( 1783-1854). Bernal was a politician who had a long parliamentary career from 1818-1852. His private fortune, derived from estates in the West Indies inherited in 1810, allowed him to buy exquisite works of art, particularly silver, glass, ceramics and miniatures. Following his death, the auctioneers Christie and Manson held a series of sales in 1855 of 4,294 lots, 730 of which were acquired for the Museum of Manufactures at Marlborough House. (This collection later became the Victoria and Albert Museum). A contemporary account of the sale by Henry Bohn reported that this vase and its pair, despite having replacement covers, were sold for £590 to the Marquess of Bath.

Vase and cover, soft-paste porcelain, scene with Bacchus and Cupid? painted in enamels and gilt.

King, William. Catalogue of the Jones Collection, II, Ceramics, ormolu, goldsmiths' work, enamels, sculpture, tapestry, books, and prints. Victoria and Albert Museum: 1924. 18 p., no. 143A, ill. plate 20.
Savill, Rosalind. The Wallace Collection: Catalogue of Sèvres Porcelain, 3 vols. London: Trustees of the Wallace Collection, 1988. See vase Vol. I pp, 233-235 for a detailed discussion of this shape and pp. 235-244 for three examples, C267 of c. 1767 with a bleu nouveau ground reserved with a pastoral scene with figures, C.268 probably later decorated, and C269 of c. 1770-75 decorated with a beau bleu ground reserved with a mythological scene. This pair of vases with replacement covers in the Jones Collection are cited p. 243, notes 3j, 22 and 45. See also p. 459, vase C336 for the same subject of Bacchus drinking, reclining under a canopy, two goats and putti at his feet. The source for this is identified as L'Automne, Saison où triomphe Bacchus engraved by N. Lemire after Charles Eisen, illustrated 458p. This vase 782A-1882 is cited as bearing another example of the scene, 457p and note 18. A further example is on a sugar bowl in the Louis XVI service in the Royal Collection.
Henry G. Bohn. A Guide to the Knowledge of Pottery, Porcelain and Other Objects of Vertu, comprising an Illustrated Catalogue of the Bernal Collection of Works of Art . London: Bell & Daldy, 1872. Illustrated, p. 47.
The Bernal sale was held by Christie's, London, 5 March 1855. 782:1 &2-1882 were lot 601, Bohn includes the catalogue text followed by a note of the buyer, price and his own commentary.
'Lot 601 PAIR OF OVIFORM VASES AND COVERS, OF EQUALLY HIGH QUALITY, GROS BLEU,with flat handles, encircled with bands of foliage, the front of each nearly dcovered with an exiquisite painting of Bacchus seated, with an infant and goats, and a nymph presenting a wreath to Cupid in landscapes, on the reverse are bouquets of flowers suspended from blue ribbons - on fluted stems and circular plinths - 13 in. high. (See illustration.) 590l. Marq. of Bath.
The painting of these vases was of the very highest quality, they were obtained by Mr. Bernal from Mr. Jarman, many years since; the tops were of English manufacture, and were not originally intended to have covers.'
Troude, Albert. Choix de Modèles de la Manufacture de Porcelaines de Sèvres, Paris, Librairie des Arts Décoratifs, edited by A. Calavas, 1897. Pl. 113 Vase Fil et Ruban 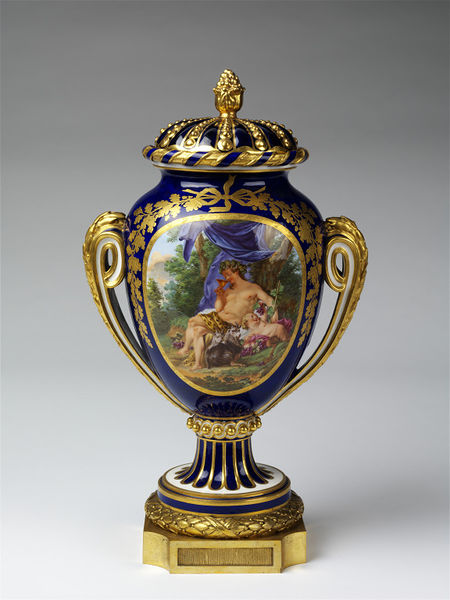