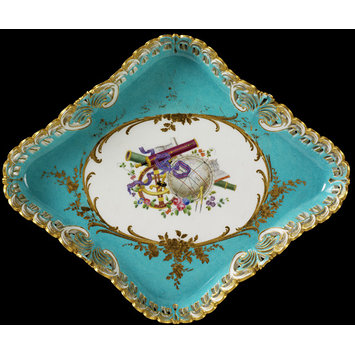 Tea drinking never became as fashionable in France as in other European countries. But the practice existed at an aristocratic level as an alternative to the usual coffee and chocolate. So-called cabaret sets or déjeuners consisted of complete services on a tray for just one or two people. The Vincennes/Sèvres factory gave them the most luxurious treatment, since its patrons were the wealthiest members of French society.
The shape of this tray was known as corbeille lozange and it was designed by Jean-Claude Duplessis, directeur artistique at the porcelain factory. Originially the shape was intended as a desert serving dish and was included in the first full service made at Vincennes, ordered by the King, Louis XV in 1753 and delivered 1753-55. These were decorated with a deep turquoise ground, flower sprays and gilded with rose thorn borders, and cost 480 livres each. Surviving examples from this service show that they were all thickly potted and prone to damage in the kiln. Perhaps for this reason, unlike the other service shapes, they were rarely re-used and are seldom found today. As there is no service listed of this date with this decoration this tray was no doubt always intended as a tray for a tea service, a déjeuner corbeille, and fortunately the matching cups and saucers, teapot and sugar bowl have survived. The pieces in the teaset all have the date-letter H for 1761 and the anchor symbol for the painter Buteux. Charles Buteux specialised in trophies, depictions of themed objects carefully arranged into artful groups. The objects in the trophy on this tray relate to astronomy, geography and navigation, while those on the other pieces relate to love, music, travel and wine. The ground colour is a pale turquoise, known as petit verd or bleu turquin which as Rosalind Savill has pointed out, is unusual and seems to be found only on pieces dating to the early 1760s. Perhaps the King's influential mistress, the marquise de Pompadour, had a hand in popularising it at court, as she is known to have bought a petit verd garniture of a clock and two pairs of vases in 1762.

Tray, soft-paste porcelain, of diamond shape with pierced sides, decorated with trophies relating to geometry, mathematics and navigation, painted in enamels, with gilding on a petit vert or pale turquoise ground. Rim hole.

an anchor
Painter's mark, in blue enamel for Charles Buteux

The Sotheby's catalogue (below) states:
'This shape was one of the many designed by Jean-Claude Duplessis for the famous Louis XV service in 1753-55. For four corbeilles lozanges from that service, see Christie's, 12th June 1995, lots 389-392. They were decorated with a turquoise ground, flower sprays and gilded with rose thorn borders, and cost 480 livres each. The eight different 'corbeille' basket-tray shapes in the King's service were all thickly potted and prone to damage in the kiln. Perhaps for this reason, unlike the other service shapes, they were rarely re-used and are not often found today. As there is no service listed of this date with this decoration this tray must have been intended as a tray for a tea service, a déjeuner corbeille. As such there would have been tea wares with matching decoration of turquoise ground and trophies. An expensive item of this type would have been made for a prominent member of the court of an extremely wealthy client of the factory.'

The detailed composition of the trophy is as follows:
a partly unfurled scroll with a table of geometrical drawings entitled ELEMENS D'EUCL
a book shown open at a page with the title TABLES DES SINUS TANGENTES ET SECANT....
a globe showing Europe and Africa with latitude and longditude marked
a compass hooked on the rim of the globe
two telescopes, one a table version with an elaborate mount
a theodolite (?)

See The Evill/Frost Collection sale, Sotheby's, London, 16th June, 2011, lot 241 for another tray similar tray with a bleu céleste ground and war trophies painted by Charles Buteux l'aîné
William King, Catalogue of the Jones Collection, II, Ceramics, ormolu, goldsmiths' work, enamels, sculpture, tapestry, books, and prints (London: Victoria and Albert Museum, 1924), p. 11, no. 119, illustrated plate 9.
Peters, David. An examination of Vincennes and early Sèvres date letters. The French Porcelain Society, A transcript of the talk given at the French Porcelain Society Study Day on 17 June 2014. London, 2014. According to Peters' new examination of the date letters against the existing records, 'h' is for 1761, not 1760-61 as formerly thought. For a discussion of the dating of the new ground colour petit vert, see p. 31. 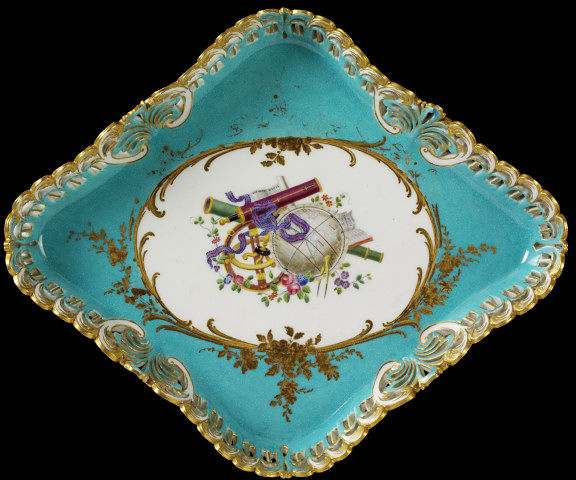