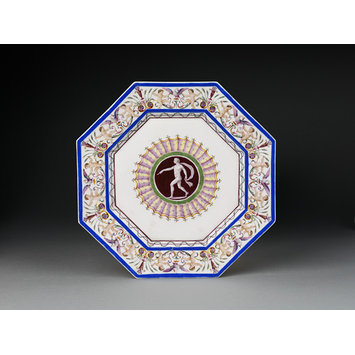 This rare Sèvres porcelain plate is from the ‘service arabesques’ commissioned by the French king, Louis XVI in 1783. The service was incomplete ten years later when the king was executed during the French Revolution. Two years later the Revolutionary government gave the service to the Minister of the King of Prussia, Karl-August, Freiherr von Hardenberg, who successfully negotiated peace between France and Prussia in 1795.

The service was designed by the architect Louis Le Masson who was steeped in the neo-classical tradition. He had travelled to Italy funded by a bursary from the crown and on his return in 1781 was appointed tutor in military and civil architecture to the young sons of the comte d'Artois (the future Charles X), the duc d'Angoulême (aged 6) and the duc de Berry (aged 3). His architectural projects are perhaps less well-known today than his work on this remarkable service for which he invented entirely new shapes and style of decoration. Le Masson based his shapes on Antique marbles and other ornament he had seen in Italy. For the decoration he relied exclusively on the work of the Renaissance artists working under the supervision of Raphael in the Vatican loggia in Rome. This had been inspired by and copied from Nero's Golden House and other sites being excavated at the time whose decoration was characterised by scrolling arabesque and grottesque motifs. Knowledge of the Vatican decoration had suddenly become available to connoisseurs in the 1770s due to the publication of a set of large-scale engravings by a group of engravers led by Giovanni Volpato. The King bought twelve copies of the publication, six of which were hand-coloured.

In the Sèvres archives today watercolour drawings survive for some shapes and decoration in the service. According to the records, in September 1783 Le Masson asked the Sèvres gilder Etienne-Charles Le Guay to travel to Versailles to copy some pages from the book of the loggia engravings. The gilder Le Guay was soon joined by his son, Etienne-Charles, a painter who proved much better at copying the designs. The Leguays used the watercolours to design the decoration of the service, supervised by Le Masson. Today the surviving pieces of the service are scattered all over the world in museum and private collections.

Plate of octagonal form made from soft paste porcelain, decorated in enamels on a white ground. The central maroon roundel shows an athletic male figure, possibly Apollo, in grisaille, within a green band. This is borded by a velarium motif, or typical Pompeiian folding curtain, in pink and yellow. Towards the rim of the plate is a trailing border of berries within maroon lines. The decoration on the rim is framed by blue borders, and shows a repeating polychrome frieze of acanthus scrolls, and two facing putti flanking a bird with outstretched wings, between ears of wheat and stylised urns. The plate has a hole in the footrim, and is marked on the reverse with the date letter for 1786.

Octagonal plate made from soft-paste porcelain, painted in enamels with a border of arabesques and a central medallion, from the 'Arabesque service', Sèvres porcelain factory, France, 1786. 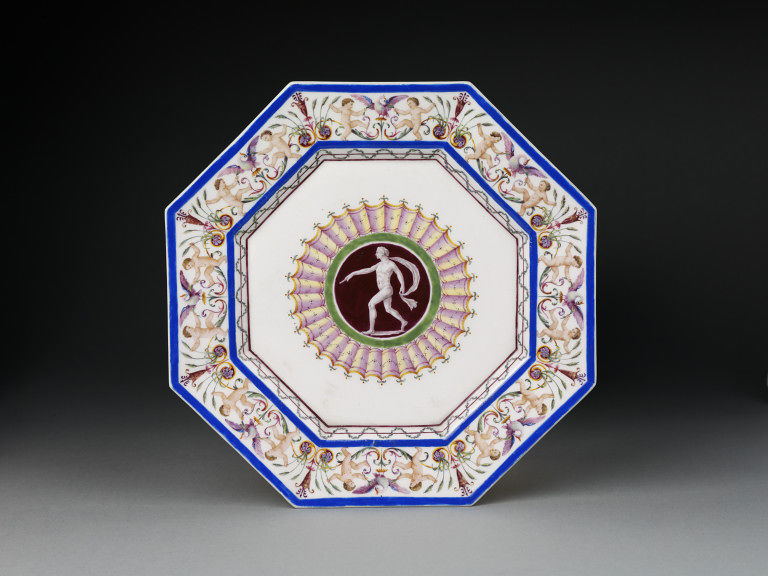