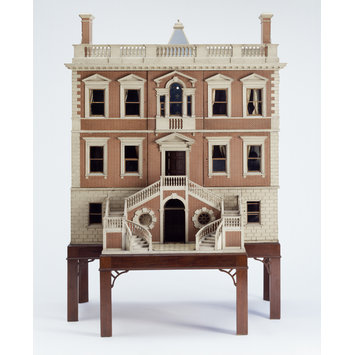 Little is known about the lady who last owned this house. Her name was Mrs Walter Tate and the house is named after her. It was made in Dorset and is said to have been modelled on an 18th century Dorset house. It is a complex structure which comes apart in several sections so that the owner, usually a lady, could take it on her travels. In those days people often went away for quite long periods of time. Coach travel took up a lot of time and journeys involved careful planning, therefore visits were often long. The baby house was the pride and joy of the mistress of the house, who would often take hers with her. She would take great pleasure in choosing wallpapers and furniture for it.
The furniture is not contemporary with the house which was updated in 1830 and at regular intervals afterwards by its owners. In an 18th century house the furniture would have been arranged in a more formal fashion around the walls of the rooms. The windows have lost their glazing bars which would have given them an authentic twelve pane look instead of the two panes that were popular in the 19th century. A painted window on the side of the house shows what the windows should look like.
Children would have been allowed to play with the house from time to time under supervision. Guests would frequently take small presents such as little silver kettles or salt containers for the baby house as a token of thanks for their hostess's hospitality.

A dolls' house modelled on an 18th century Dorset town house and named after the lady who last owned it, Mrs Walter Tate. It is made of painted wood designed as a classical building of brick with stone coigns and dressings. A balustraded external staircase leads up to the first floor level, and the pedimented entrance door has a Venetian window above. On either side are four windows, two in each storey that can open and shut. Above the cornice is a parapet formed of pilasters and turned balusters, behind which is a glass lantern lighting the staircase hall. An arched entrance in the basement has an oeil de boeuf window on each side. The entrance leads to larders and kitchens. In the sides the top windows are surmounted by drapery swags and a garland of flowers. At each end of the house are chimney stacks. The house comes apart for ease of handling when travelling. The house has undergone renovation at least three times; part of the roof has been added, the windows changed from the Georgian style to the sash windows favoured in the Victorian era, and the stand is an Edwardian addition.

Purchased in 1930 from the beneficiaries of the estate of Mrs Walter Tate with dolls and furniture.

“From the time of its construction in Dorset, it has been handed down from mother to eldest daughter; but Mrs Tate unfortunately lost all her children, and this custom of female inheritance was brought to an end.” – Arthur Sabin, Director of the Bethnal Green Museum, 1930

The Tate Baby House is one of the most famous dolls’ houses in the collection. Made in about 1760, over the centuries it has accumulated a variety of furniture and furnishings. Like a real house, it shows the traces of generations of owners: it has been redecorated once or twice, and had new windows installed in the 19th century.

The name ‘Baby House’ is a reflection of the age and grandeur of this mini mansion. Baby houses are dolls’ houses of the 1700s and early 1800s made in realistic architectural styles. They were usually bespoke commissions for wealthy adults.

The Tate Baby House was first displayed in the Museum in 1923. Its owner, Flora Tate, had always refused to show it publicly – but she was eventually convinced by the joint forces of the Museum’s director Arthur Sabin, and Mary Greg, a doll collector, member of polite society, and all-round cheerleader for the Museum.

The Tate House was reported a great success with ‘thousands of East London children’, and Flora Tate gave permission for it to stay on loan. But six years later, on 24 October 1929, she died suddenly, leaving the future of the dolls’ house uncertain.

Flora Tate, nee Bell
Flora was born in Cambridge in 1866, the first child of Louisa and Edward Bell. They lived in a large house between the colleges and the river. Edward was a corn and seed merchant, continuing a national wholesale business established by his father.

By the time she was five, Flora had three younger sisters, Beatrice, Margaret and Mary. The next year, the family moved to the Manor House, in the nearby village of Chesterton. Their new house offered a bit more space for this young, still growing, family.

Edward Bell – born January 1827
In 1887, Flora’s father Edward Bell was elected mayor of Cambridge, but died after only a year in office. Obituaries described him as ‘a plodding, persevering, hard-working man’1, with ‘qualities of tact, energy and perseverance… being greatly respected by his fellow townsmen.’

His funeral was a very public affair, and the local press covered every detail of the solemn occasion, reportedly attended by four thousand mourners. Flora was listed third of the chief mourners, after her mother and brother.

In Spring 1896, Flora married Dr Walter William Hunt Tate. He was a successful surgeon; assistant obstetric physician at St Thomas’s Hospital, London he also worked at the Samaritan Free Hospital for Women and specialised in gynaecology and midwifery. This was actually Flora’s second marriage. Four years earlier, she had married a young surgeon called Antony Dalzell, but he died only two years later, aged 27.

Walter Tate was wealthy. The couple lived in the very salubrious Queen Anne Street, West London, alongside other prominent medicos, and by 1911 were supported by seven servants who helped maintain the six-storey house and associated lifestyle. Walter was a respected and talented obstetrician, who entertained his colleagues and students at his house, and was ‘generous to a fault’ with his female patients. When he died in 1916, his obituary described ‘a hospitable man, a lover of music and a regular theatregoer. His outdoor recreations were motoring and archery'.

The same year, Flora’s mother died, and Flora continued to live in Queen Anne Street for the next 13 years, sharing her house throughout the 1920s with four doctors and their wives. This is where the dolls’ house was displayed for visitors like Mary Greg.

The fate of the dolls’ house
When Flora died in 1929, the dolls’ house was still on loan to the V&A, but she left no will. Arthur Sabin was worried. “Mrs Tate repeatedly said to me that she wished the dolls’ house to remain at Bethnal Green, but… she hesitated to take the necessary steps. Furthermore, she did not like letter-writing, and consequently I have no evidence to show of her wish.”

If the dolls’ house was sold on the open market, the Museum might not have the money to compete. ‘An American’ had apparently offered £3,000 for it – a massively inflated sum – and Flora’s brother, who was managing affairs, had ‘no interest in the dolls’ house as such, but merely as a disposable article of the estate’.5

The Museum decided to offer £250, hoping that the family would accept this as a fair valuation – thankfully they did, and the future of this magnificent house was assured. It was accessioned into the museum collection and bestowed with the name ‘Tate Baby House’, in honour of its last owner. But what of its past?

The Weldon – Litchfield – Bell – Tate Baby House
From 1760 to 1923, then, this house had apparently been within one family, moving down the matrilineal line, changing hands and changing names – maybe passing on at moments of birth, marriage or death from one woman to the next. Who were these careful caretakers of the little house?

Records of the family only go back as far as Johanna, wife of Francis Weldon. Tantalisingly, Johanna was born about ten years later than the Baby House is said to have been made, so her mother was probably its first owner.

Johanna and Francis lived in the City of London, married in 1795 and had two daughters. Emma Harriet died while still a baby in 1797, but Louisa was born on 18 January 1799 and lived through childhood. Both girls were christened in All Hallows Church, on Bread Street in the City. This Baroque church was, like so many in the City, built by Christopher Wren and Nicholas Hawksmoor, after the Great Fire. The Weldons must have had a house large enough for the dolls’ house, and may have been in the fruit trade.

Louisa, aged 33, married Edward Litchfield on 4 January 1832, at St Botolph-without-Aldersgate. Edward Litchfield was a widower from Cambridge, and a fruiterer himself. His first wife, Mary, had died leaving Edward with five children. So Louisa went to Cambridge (probably taking the dolls’ house with her), and moved into a house on All Saints Passage with the large family of step-children. This large house down a narrow alley is tucked away between the river and the colleges.

When her daughter was born in 1833, Louisa named her Louisa Weldon, continuing her own maiden name. Louisa Weldon would be the only child of Edward Litchfield’s second marriage. Following her mother’s example, she married a merchant called Edward, becoming Louisa Weldon Bell in 1865. Edward Bell, as explained above, was the heir to a national seed wholesalers and a rising figure in Cambridge politics.

When Louisa Weldon and Edward Bell moved to the Manor House in Chesterton, the older Louisa moved in with them, spending the last years of her life with her grandchildren, maybe retaining guard over the fine dolls’ house that she had bought all the way up from London as a young woman.

A fully furnished dolls' house made in England about 1760 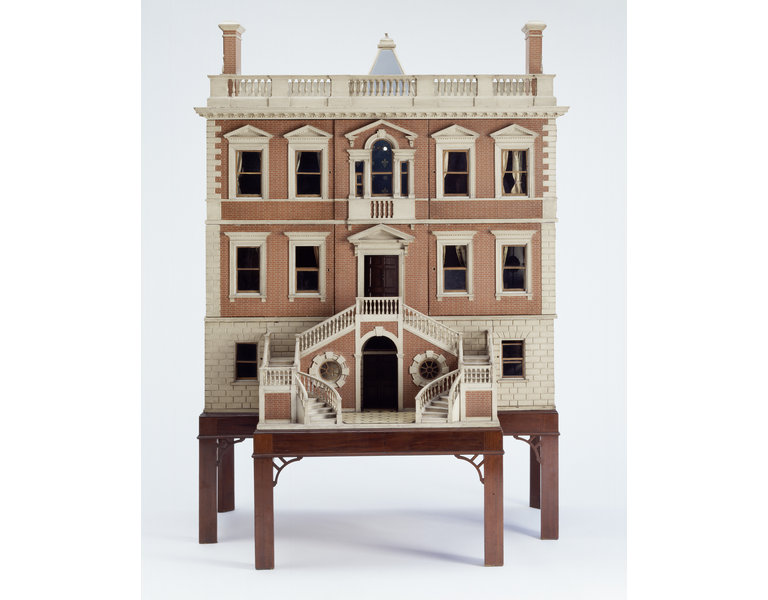