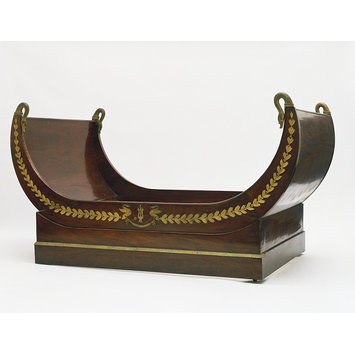 Tradition has it that Emperor Napoleon I gave this bed to the Comtesse Louise-Charlotte de Montesquiou-Fezensac in recognition of her services as governess to his son, the King of Rome. Whether that story is true or not is uncertain. What is known is that the comtesse’s great-grandson, Comte Robert de Montesquiou-Fezensac, gave the bed to the American painter James McNeill Whistler in 1892, perhaps in part payment for a portrait done by the artist in the previous year. Whistler was a collector of Empire furniture and he may well have valued the supposed history of the bed.

A bed of mahogany, with gilt-bronze mounts, designed to sit laterally against a wall, under a draped canopy. This form in France is known as a lit en bateau (a boat-bed). The bed is raised on a stepped plinth, plainly veneered in mahogany, with a moulded edge to the step. The foot and head boards are of similar height and curve inwards towards the top. The front face of these is continuous with the base of the bed. It it plainly veneered in mahogany, with gilt-brass mounts in the form of laurel garlands rising from a central grouping of a lyre, flanked by two swans holding a laurel swag between them. The garlands rise the full height of the curved end, diminishing in size towards the ends, which are mounted with finial mounts in the form of three-dimensional swans' heads. Similar finials are found on the back corners, although the back surface of the bed is undecorated. The outer and inner surfaces of the head and foot board are veneered in plain mahogany, with no gilt-brass mounts. The original hangings and mattresses of the bed do not survive.

The bed is constructed in three parts, the horizontal join of the ends with the main base is clearly visible. The two ends fit with tenons into the base.

Mahogany veneer on a softwood, set with gilt bronze mounts

MAPLE'S DEPOSITORY
MCNEIL WHISTLER FSC
Rectangular printed label, with printed outline, the name of depositor added with rubber stamp. This label has been removed from the bed (original whereabout not recorded) and is now in the departmental catalogue.

This bed is said to have been given to Louise-Charlotte, Comtesse de Montesquiou-Fezensac by Napoleon, in gratitude for her service as governess to the young King of Rome. She was present at his birth and took charge of the child from an early age. Her role as governess is recorded in R. MacNir Wilson, The King of Rome (1932), but the history of the bed has never been fully documented. In 1892 her great-grandson, Comte Robert de Montesquiou-Fezensac (1855-1921), gave the bed to the artist J.M. Whistler, after the latter had completed a portrait of him, which now hangs in the Frick Collection, New York. Montesquiou-Fezensac was a Symbolist write and poet, and a collector, particularly of Asia art. His immense wealth supported a flamboyant lifestyle. He was a published poet, whose undisguised homosexuality challenged more orthodox society of te period. The Comte was a famous aesthete and is said to have provided Marcel Proust with the model for the character of Comte Charlus in his multi-volumed work A la Recherche du Temps Perdu published between 1913 and 1927. He greatly admired Whistle, making a long visit to him in London in 1888 and introducing him to aristocratic and artistic society in Paris. He commissioned the portrait, entitled 'Arrangement in Black and Gold: Comte Robert de Montesquiou-Fezensac'. The friendship was only broke when Whistler discovered that the Comte had sold the portrait in 1902 (it became part of the Frick Collection in 1914). The story of their friendship was recorded in Edgar Munhall's Whistler and Montequiou. The Butterfly and the Bat (New York, 1995), the catalogue of an exhibition held at the Frick Museumm 1995-6. Pages 80-83 deal with the gift of the bed, noting that it was offered in the summer of 1892, when Whistler and his wife were setting up their new Paris residence at 110 rue du Bac, and much of the history noted here comes from that publication. Empire furniture was highly fashionable in artistic circles (the painter John Singer Sargent (1856-1925) was an enthusiast, as was Aubrey Beardsley (1872-1898)). The Whistlers were enthusiastic about the gift, James describing it as 'the splendid boatbed', his wife Beatrice noting 'Since the day I first saw it at your home, it has been my dreame, to some day find one something like it, and I have seen several - but nothing to equal it.' It was Edgar Munhall who first suggested, in 1968, that this correspondece, although not conclusive, indicates that the Comte paid for the portrait with the bed (Edgar Munhall, 'Whistler's Portrait of Robert de Montesquiou', Gazette des Beaux-Arts, April 1968, pp. 231-42). In October 1892 Whistler wrote of the final transfer of the bed: 'Can we send someone to get it? Or do you wish to get it under full sail, and navigate it to the new harbor - Rue du Bac- No. 110!!!' As to the portrait, Whistler held on to it until he finally agreed to its exhibition at the Salon of the Societé Nationale des Beaux-Arts in 1894, after which it finally went to the Comte.

The symmetrical ropes of laurel seen on the front of this bed are similar to the ornament over the door of the house in which the Comte was born - the Hôtel de Béthune, 60 rue de Varenne - and over the windows of the house built by his father aroud 1863 at 41 quai d'Orsay, where the Comte spent his youth.

The form of this bed was first seen in designs by Charles Percier, between about 1800 and 1810. The Bellangé album in the Metropolitan Museum, New York (inv. no. 51.624.2, folio 4A) also illustrates a slightly later watercolour design for a very similar bed (see Sylvain Cordier, 'The Bellangé Album and New Discoveries in French Nineteenth-Century Decorative Arts', Metropolitan Museum Journal, 47 (2012), pp. 119-147, where the design is illustrated on p. 131. The Bellangé drawing shows similar swan finials but larger-scale mounts on the front lower sweeps, showing female figures, in place of the continuous sweep fo foliage. The bed is placed on a low plinth and the swagged coverlet, with severe top line, places the bolsters at either end behind the the swan finials.

The design, with swan's heads and laurel mounts was frequently made, with variations, and such beds appear frequently at auction. At the time of its donation, the bed would have been a particularly welcome accession to the Museum's collection. French Empire furniture, like British Regency furniture, was just beginning to be studied and the curator, Oliver Brackett, who first inspected the bed, noted 'in fact we have no French Empire furniture'. In a later memo, dated 16 November 1933 the Keeper of Furniture and Woodwork, Ralph Edwards noted: 'Designers of modern furniture find considerable inspiration in the Empire style, which for a variety of reasons is curiously in accord with contemporary taste, and this bed is likely to form a very useful model. It was to be displayed in Gallery 7. Miss Birnie noted that it was given to the Whistlers in 1908, but this was clearly a mistake. She noted that there was a small, loose piece to the frame and sent a number of fragments with the bed. She also offered the mattress and bolsters but it is not know whether these were accepted. They do not survive now. In the following year (1934, the centenary of Whistler's birth), the V&A borrowed watercolours and etchings by Whistler from Miss Birnie, to combine with their own holdings to create a small exhibition. A watercolour of 'Westgate' was subsequently give by Miss Birnie to the Museum (inv. no. P.19-1934).

Bed of mahogany and other woods, with gilt-bronze mounts, including swan heads

Eden, Mary and Carrington, Richard. The Philosophy of the Bed
London: Hutchinson, 1961
Plate12 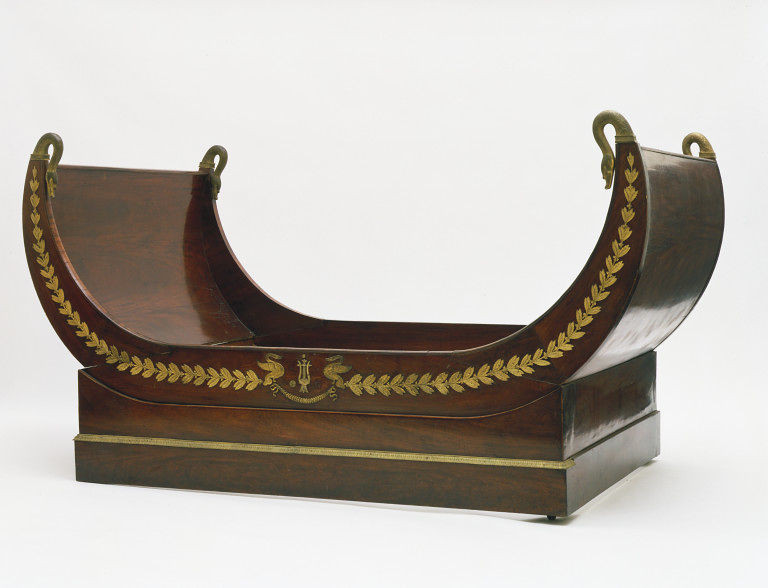