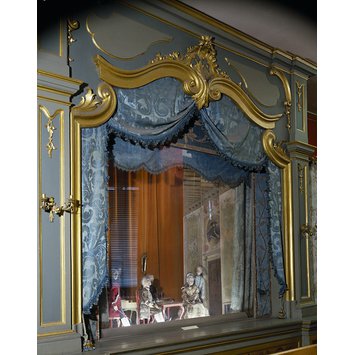 Marionette theatre, carved wood, painted white and gilded, with candle-brackets of gilt metal. On either side of the proscenium is a canvas door, painted with flowers, fruit and birds, and surmounted by a mirror, the glass of which is painted with a mythological figurine in white, on top is a coat of arms: per fesse, 1, the arms chapé of the Dominican Ender; 2, fusilly in bend sinister argent and gules; count's coronet.

There are two scenes, one represents an interior with painted wooden furniture (two tables and four chairs, painted red, and a harpsichord), and six puppets. The figures for this scene are: an old couple and a young couple, both richly dressed; a manservant and a gendarme. The other scene represents a piazza in Venice and has six Italian figures from the Commedia dell'arte: Scapin, Pantaloon, Columbine, the Captain, the Doctor and Harlequin. The curtains are blue and gold.

This marionette theatre was made in the 18th century, probably in Venice. It is likely that it was a private theatre, in the house of a rich nobleman. It was stated to have come from the Palazzo Carminato, Venice, but on no very definite evidence. The coat of arms may possibly be that of the Salomoni family of Venice, but certainly not that of the Carminato family.

The theatre was offered to the V&A in 1923 by a Mr Francis Harper, who had already helped the Museum to acquire various other interesting exhibits. He was keen that it should come to the Museum and helped to raise the money to buy it. It seems that he probably bought it in Italy and brought it to England. It was purchased by the Furniture and Woodwork Department in 1924 for £250 [23/8512] and transferred to the Bethnal Green Museum in 1965 [RP 65/3119].

When it entered the Museum it was painted white and gold. Later, it was repainted green and gold. In the 2000s, the V&A’s Conservation Department uncovered the original gilding of the decorative pieces along the top. This led them to try to discover the original paintwork of the rest. It was found that the top part, the proscenium arch, had been many times repainted. The original colours were blue and cream. It has been repainted in those colours with a touch of gilding in the middle.

The lower part, the stage platform, had only been repainted twice, and was originally black and white, imitating marble. This suggests that the two parts of the theatre may not always have belonged together: perhaps the base was a later addition. This is also suggested by the fact that the decorative panel in the middle of the base has been cut down. The leafy decoration has been painted out at the ends. The base has been repainted to imitate marble, but in a cream shade to more closely match the top.

The theatre originally had scenery for two other settings. One was a room indoors, the other the Piazza San Marco in Venice. The side-wings for these settings remain, but the backcloths are now missing.

The proscenium arch, the base, and the decorations on the top may not always have belonged together. But the theatre was used for at least 150 years before it came to the Museum, and may have been put up and taken down several times in that period.

The theatre has twelve 18th century puppets, which fall into two groups of six:

Group A – characters from the Commedia dell’arte:
Pantalone, the father (in maroon with a black cloak);
The Doctor, his friend (entirely in black);
The Lover;
His Beloved, probably Pantalone’s daughter;
Arlecchino (Harlequin), a comic servant (in a suit of many colours);
Scapino, another servant (in white with green trimmings)

Group B – characters who could appear in various 19th century plays:
An elderly man
A young man
A manservant (in red)
An elderly woman
A young woman
An official (in green)

Their faces have been repainted. The costumes are all made chiefly of 18th century textiles. Some pieces of later textile were found in places where, obviously, repairs had been made. During conservation in the 2000s, the original textile was cleaned, repaired and strengthened, and a few very badly perished pieces were replaced. The largest replacement is the Doctor’s cloak.

The marionettes were originally supported on wires hooked to their heads, with a round handle (a ‘turnip’ control) for the operator to hold. There would have been strings to move the arms but none to the legs.

Puppet performances were very popular in Venice in the 17th and 18th centuries, both in public theatres and private houses. Many opera were written to be acted by puppets (and sung by humans).

‘Commedia Dell’ Arte’ is Italian for ‘comedy of art’. In itself the phrase does not mean much, but it is used to describe a kind of comic drama popular in Italy in the 16th and 17th centuries. It was performed by groups of strolling players, who took a collapsible stage around with them. They acted their plays mostly by miming, and the men usually wore grotesque masks. If they did use words, they made them up as they went along. But they always knew what was coming next, because the stories they acted were almost always the same, and were full of stock incidents of the kind we know as ‘situation comedy’.

Usually there was an old man called Pantalone, who was bitter towards young people. He had a daughter who wanted to marry a young man of whom Pantalone disapproved. Pantalone probably wanted to marry a young lady who did not like him and his elderly friends, like the Doctor, and might also pursue young girls in an undignified way. In such situations there was plenty of room for comic misunderstandings. These often arose through the mischievous efforts of the comic servants, Arlecchino (Harlequin), Scapino, Brighella and many others. These kept the action going and introduced slapstick humour.

Commedia Dell’ Arte players travelled about to fairs, not only in Italy but through France and other countries of Europe, even reaching England. One unimportant character in the plays, Pulcinella, somehow turned into Punch and lived on in the Punch and Judy show. 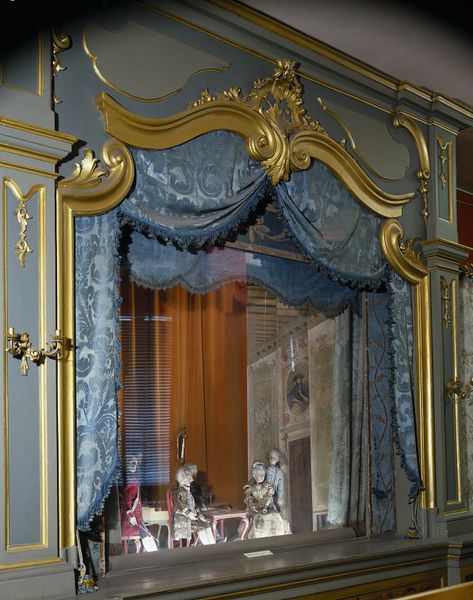