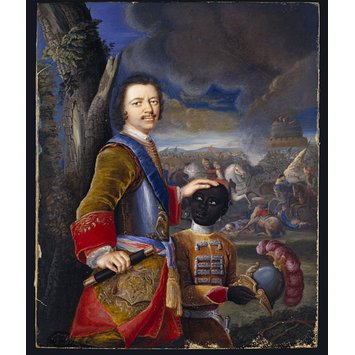 Peter the Great with a Black Page

This is a portrait of Peter the Great, Tsar of Russia (1672-1725), and his black page. During his reign Peter introduced a programme of military, religious and administrative reforms that began the modernization of Russia, and its development as a great European state. Many of his reforming ideas were inspired by his travels in Europe, and these Western influences can be seen in this miniature.

The miniature was painted by Baron Gustav von Mardefeld, an artist, Prussian diplomat and soldier, who was his state’s ambassador in Russia. It was probably a diplomatic gift and interestingly combines Western classical references with elements of Russia’s own cultural traditions. Peter wears fashionable French dress and is clean-shaven – one of his cultural reforms was to enforce shaving on polite society, against traditional Russian orthodoxy. He carries a baton of office and wears a breastplate with the Russian insignia of the double-headed eagle, both indicating his standing as military leader. He also wears the sash of the Russian Order of St. Andrew, which he had founded. Other Western artistic conventions are seen in the decorative helmet, which is classical in inspiration, indicating ancient lineage and tradition, and the presence of the black page.

Portrait of Peter the Great, Tsar of Russia, with an African page, originally thought to be Abraham Hannibal, with a battle scene in the background. The Tsar rests his hand upon the head of the boy. Abraham Hannibal would have been in his mid twenties when this was painted and cannot therefore be the page.

The frame was opened by Conservation on 25/3/10. The vellum is stretched around copper, so it is not possible to view the "back" of the vellum. It is likely that the artist stretched the vellum around copper which was not an unusual practice, the metal acting as a strong support for the vellum.

There is a letter from Magnus Olausson, Senior Curator at the National Museum of Fine Arts, Stockholm, 6 Sept 2000 kept on the Departmental file for this miniature, noting that it can be attributed to 'Baron Gustaf von Mardefeld', based on its resemblance to a similar miniature of Peter I of Russia in Stockholm, Museum Number : NM B 108 (photo on the file). The Stockholm miniature shows Peter the Great in the same pose exactly, but to the waist only, his hands omitted. In the V&A version he holds his commander's baton in his right hand and rests his left hand on the head of his page, who holds his helmet. In the Stockholm miniature he wears the same blue sash, but his jacket is red and he does not wear the breast-plate shown in the V&A miniature. In the Stockholm miniature he is also depicted against a plain background of blue-grey, with some shadowing. The Stockholm miniature is signed on the reverse, according to Leo R. Schidlof The Miniature in Europe (1964), "Gustaff B. Mardefelt. Fecit 1720".

Historical significance: The entry on "Gustav Freiherr von Mardefeld (also Martinfeld)" in Leo R. Schidlof The Miniature in Europe (1964) offers a limited amount of biographical information about Mardefeld. But almost nothing seems to be known about his training as an artist. Schidlof notes that he was "said to have been a pupil of David Krafft". An entry in German on "Mardefeld, Gustav von" in "Wikisource" [accessed:26/3/2010] discusses only his role as a diplomat. There are references to him in Paul Bushkovitch Peter the Great, The Struggle for Power, 1671-1725 (Cambridge University Press, 2001), but again only in his diplomatic role; "The new Prussian ambassador Gustav Baron von Mardefeld explained the situation..." (p.376) (N.B. Gustav Baron von Mardefeld should not be confused with the Swedish General Mardefelt).

In 2004 this miniature featured in a V&A web-project called "Every Object Tells a Story", under the title "A Case of Wishful Thinking?". The entry read:
"This painting entered the V&A in 1882, but it was another 120 years before it was realised that the boy standing next to Peter the Great might be the famous Abraham Hannibal (c.1696-1781).

Hannibal was born in Africa, the son of a noble family whose precise geographic origins are much debated. Kidnapped at an early age, he was adopted by Peter the Great in 1704 and went on to enjoy a highly successful career in the Russian army. His two great legacies were the impressive fortifications he designed while Chief Military Engineer, and his great-grandson, the celebrated writer Alexander Pushkin.

The exact date of this painting is not known, but Peter the Great was born in 1672. If he is in his mid-thirties here, then the date must be around 1707. Hannibal would have been about eleven. The dates and faces fit and the two figures seem to be on good terms. But, tempting as it is, there is insufficient written evidence to prove outright that the young boy really is Abraham Hannibal".

In fact it seems more likely that the miniature was painted in 1720, based on its resemblance to the miniature in Stockholm of Peter the Great in the same pose, signed and dated by Mardefeld 1720. Although the page could be an allusion to Abraham Hannibal (also known as Abram or Ibrahim Gannibal) it cannot be a portrait of him, as in 1720 Hannibal was twenty four years old. Mardefeld was appointed ambassador to Russia in December 1719, so the Stockholm miniature was painted soon after his arrival in Russia, probably as a diplomatic gift. If it was painted from life then Peter the Great is shown aged forty eight. The V&A miniature is a worked up version of the Stockholm miniature, including additional motifs intended to evoke Peter the Great's military standing - such as his commander's baton and breastplate - and echoing European art, such as the inclusion of a black page, found in many aristocratic portraits in the 17th century. The Tsar additionally wears French fashionable dress, while his attendant's style of dress is associated with traditional Eastern European attire, specifically the frog-fastening on his coat. The Tsar is also wearing the Russian insignia of St Andrew - an order which he founded - and his breastplate carries the Russian insignia of the double-headed eagle. The decorative helmet is classical in inspiration, another Western convention indicating ancient lineage and tradition. The battle scene in the background seems to allude to the Tsar's efforts to modernise Russia, setting Western European ideas, inspired by his travels in Europe against the forces for tradition. The opposing forces are dressed in different styles, some wearing traditional Cossack hats and also full beards, while others wear fashionable Western three-cornered hats and are clean-shaven. One of Peter's cultural reforms was to enforce shaving in polite society, an attack on the traditional Russian orthodoxy of wearing long beards.

Label for Black History Month display, October 2001:
"Peter the Great and a Servant, thought to be Abram Gannibal
From the 17th century it was fashionable for European aristocrats to be painted alongside their black servants. Abram Gannibal (1690s-1781) was the kidnapped son of an Abyssinian (Ethiopian) prince. Peter the Great later made him General of the Russian Artillery. His life was celebrated in literature by his great-grandson, the poet Alexander Pushkin.

Letter from Magnus Olausson, Senior Curator at the National Museum of Fine Arts, Stockholm, 6 Sept 2000; the V&A miniature can be attributed to Baron Gustaf von Mardefeld, based on its resemblance to a similar miniature of Peter I of Russia in Stockholm, signed "Gustaff B. Mardefelt. Fecit 1720", Museum Number : NM B 108 (this letter is on the Department File, with a photograph of the Stockholm miniature). 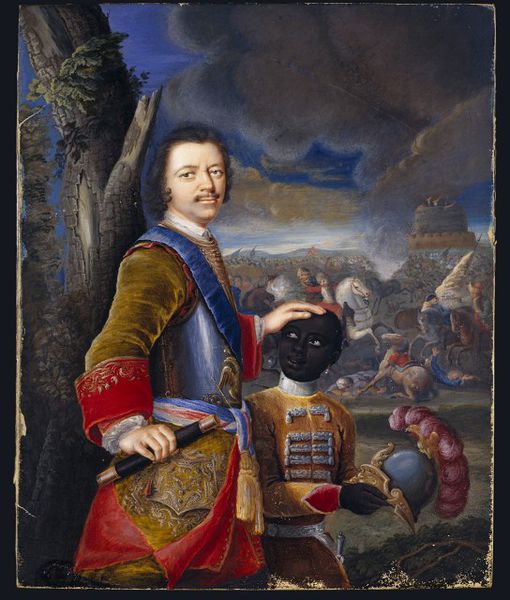