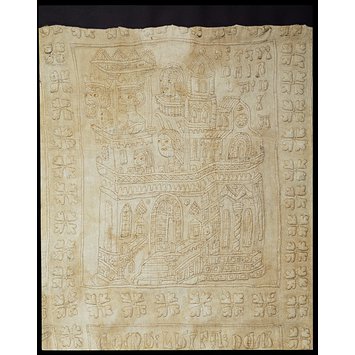 The legend of Tristan and Isolde was a favoured narrative in the Middle Ages and appears in many forms in literature and the decorative arts. The story represented here on a quilted linen coverlet in 14 scenes, is that of the oppression of Cornwall by King Languis of Ireland and his champion the Morold, and the battle of Sir Tristan with the latter on behalf of his uncle King Mark. Although in subtle shades, the large scale designs are very clear and the quilt must have looked particularly impressive by candlelight, with lively scenes of battles, ships and castles.

Part of a quilted linen coverlet probably for a bed with scenes from the legend of Tristan outlined with brown and white linen thread in backstitch. With this form of quilting, trapunto (stuffed quilting), the design is brought up into relief where required; the threads of the backing are pulled apart and rolls of cotton are inserted, with also some cord quilting. The linen backing is more loosely woven than the front to allow for this. The scenes are not in their original order, and have been re-arranged; the top has been cut and re-stitched around figures (two sets of stitch-holes visible) at a later date.
There are six scenes in the centre within a border of four-leaf clovers:
1) The Morold on a horse in a boat, with his fleur-de-lis shield, shooting with a bow, and a page is rowing the boat;
2) A castle with a king and queen and another looking out, probably King Languis, Queen Lotta and Isold waiting for the Morold;
3) Tristan, with his three horns shield, and Morold, with fleur-de-lis shield, fighting on the isle;
4) A page with a saddled horse;
5) A ship being pushed away by Tristan's foot (who is in the adjacent scene);
6) Tristan with his horse and shield with three horns.
Central scenes are framed by eight border scenes that are placed horizontally on the lower edge;
7) King Mark sitting on a throne in his castle with hound beside him receiving the letter from the two kneeling ambassadors. Behind them stands Sir Tristan holding his sword;
8) A ship with soldier rowing, in the raised poop deck are the two ambassadors, with banner above bearing fleur-de-lis; and vertically on both sides - left from top:
9) A ship with rowing soldiers and banner bearing fleur-de-lis, in the poop deck is a man blowing a boatswain's whistle, with a page sitting below him;
10) Tristan giving his glove to Morold, who is in full armour;
11) A Cornish noble is paying money to seven of the Morold's men (the end of a trumpet is visible to the left of the nobleman);
12) A ship with rowing soldiers and banner with fleur-de-lis, in the poop deck sits the Morold with his mace, facing a man who blows a boatswain's whistle.
Right from bottom:
13) King Languis sitting on a throne in front of a castle, gives letter to two kneeling ambassadors, behind him are three nobles and behind the ambassadors stands the Morold with mace and glove;
14) Represents the Morold with a mace and herald blowing a trumpet and wearing the 'glove of battle'.

The following physical details were established by Lynda Hillyer during conservation in 2007, written in answer to questions from an enquirer :
1) Finishing of edges - The linen on the face of the object is taken round to the back creating a very tiny hem which is slip stitched to the linen on the back of the object. The hem is about 4mm deep.
2) How many pieces of fabric - the central section is made up of 2 widths which are joined with a very fine seam formed by turning back the edges of each width and secured with very fine tight slip stitching. The loom width of the linen on the face of the object is possibly about 67.5cm (26 and a half inches). The central panel also forms part of the upper and lower borders. The linen on the back of the object is also formed from two widths but the seams of the two layers are offset - ie the back linen is placed about 11cm to the proper left of the seam on the face of the object. The seams joining the central panel to the two side borders are also formed by turning the edges of the linen back and by slip stitching - this is not as fine as the seam joining the central widths together. The seam on the reverse corresponds in position to the seam on the face but is formed by one layer of linen being folded back and laid over the panel it adjoins. On the proper right of the object the folded layer is that of the central panel, on the proper left it is the linen of the side panel. On the proper right a feature has been made of the seam by two rows of back stitch on either side of the seam. The central section and the side panels were certainly worked separately.
3) All figurative elements and all the lettering is worked in brown linen thread. The background to the figures and letter is worked in 'white' stitching.
4) The background stitching does echo the figures to a large extent. Because the quilt has so many elements this means that the background stitching is worked in many directions. It can be at a diagonal, horizontal or vertical to an adjoining figurative element so it often appears to be random in direction, but on close observation it has started by echoing a figure. This stitching is a simple running stitch. The lines of stitching are generally about one eigth of an inch apart (3mm) and there are 7-8 stitches per inch (2.5 cm). The lines of stitching create a slightly rippled effect possibly due to the excess of fabric around the quilted areas.
5) There are no indications of drawing on the linen under the embroidery. This may indicate that the quilt has been washed at some time in its history.
6) The figures in the border scenes are between 42-55cm. The letters are between 3.5 and 4.5cm high. I can only access one figure in the central area - this is 58cm high.
7) The embroidery goes through both layers of linen, sometimes not completely but in general the outlines of embroidery thread on the reverse of the object mirror those on the face of the object.
8) All figures are stuffed throughout.
The fact that the stitching goes through both layers indicates that the stuffing could not have been introduced through the more loosely woven linen of the back of the object. It seems more likely that the outline of each figure was stuffed as the work was in progress, and when the stuffing was in place the outline was closed. The details of the figure could then be embroidered.
The possible loom width of the linen on the back of the object (which is a coarser weave than that on the face of the object) is about 76cm (30").

2) ...SITA: IN AIRLANDIA
...in Ireland
The first part of the inscription is torn away

5) COMU TRISTAINU BUCTA: LA VARCA: ARRETU: INTU ALLU MARU
How Tristan struck his boat behind him into the sea

7) COMU (li m) ISSAGIERI: SO UINNTI: AL (lu) RRE: MARGU: Per LU TRIBUTU DI SECTI ANNI
How the ambassadors are come to King Mark for the tribute of seven years
Part of the inscription is torn away

8) COMU: LU RRE: LANGUIs: MANDA: Per LU TRABUTU In CORNUALIA
How King Languis sent to Cornwall for the tribute

The variation in the quality of drawing and stitching suggest that it was a collaborative effort. The quilts were worked in sections and then joined. However, there have been some re-arrangements of the scenes, probably much later, for example the upper right-hand corner shows a herald blowing a trumpet and the end of the trumpet appears in the middle of the left-hand border. Originally the piece might have consisted of twelve panels, in six pairs, surrounded by a continous border of the same width - only half of it remains with six centre panels and border on three sides. The scenes depict events related to the oppression of Cornwall by King Languis of Ireland and his champion, Amoroldo, and the battle of Tristan on behalf of his uncle, King Mark. It follows, with some slight differences, the 14th century Novella, La Tavola Rotonda o L'Istoria di Tristano, ch, 17-19. According to legend, on the tombs of Tristan and Isolde, ivy and grape vines grew and intertwined, and both plants are included among the foliage that decorates the quilt. The coat of arms on Tristan's shield, three hunting horns, is the coat of arms of the Guicciardini family. The emblem of three lilies carried on the shield and boat of Tristan's opponent, may have been the Acciaiuoli family's coat of arms which contained lilies. A wedding took place between Laodomia Acciaiuoli and Piero di Luigi Guicciardini in 1395. No indisputable reference to the quilts can be found in the inventories of the Guicciardini family, only a single mention of "three quilted bedcovers".

Historical significance: Tristan and Isolde are second only to Lancelot and Guinevere as great lovers of the Arthurian legends, although originally the story had nothing to do with King Arthur. The story of their tragic love has been the subject of numerous medieval and modern retellings. The medieval versions of the story are sometimes divided into two branches, called the courtly and the common versions. Love is loftier and more courtly in the courtly version.

There is a related piece in the Bargello, Florence, originally thought to come from the same large quilt. Recent research suggests that it is more likely that the quilts were made as a pair, and subsequently altered. The Bargello piece, acquired in July 1927 from Count Paolo Guicciardini, has got eight scenes, and consists of three longitudinal strips joined together; it measures 2.47 m in height and 2.07 m in width. It has been suggested that this piece had always belonged to the Guicciardini family.
There has also been a suggestion that the two quilts were assembled out of two wallhangings.

Quilted bedcover with scenes from the legend of Tristan, Sicily, about 1400 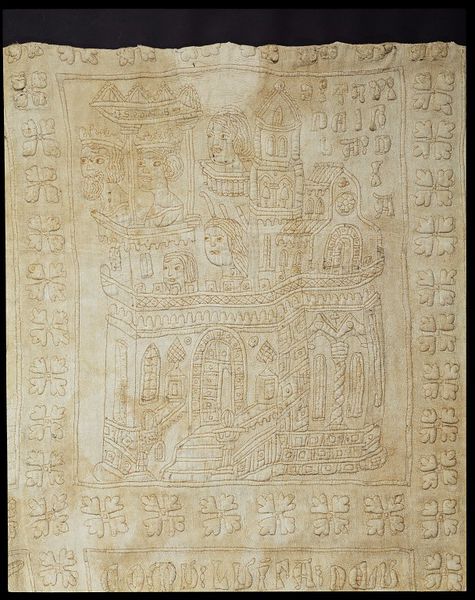