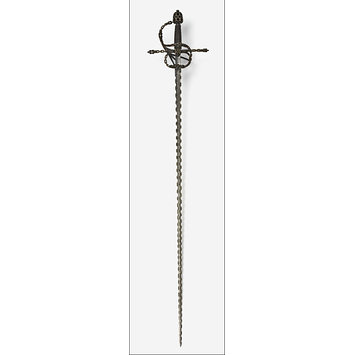 Steel hilt, cut, pierced and engraved in the form of a chain, blued and inlaid with gold. The Spanish flamboyant blade is inscribed 'VALENCIA ME FECIT'

France (made)
Valencia (blade, made)

Cut, pierced and engraved steel, blued and inlaid with gold

inscribed 'VALENCIA ME FECIT'
On blade

The hilt was the most prominent part of a rapier, and therefore was almost always its most heavily decorated feature. Even the most ornate hilts often were married to blades left undecorated. Occasionally however, a blade might be just as impressive as its hilt. An ornate blade suggested its owner drew it often, since its excellence could be admired in no other way.

The blade of this rapier is a virtuoso piece of metalwor, each of the ninety-six cusps in the blade painstakingly forged and staggered an unusual stepped effect. The 'teeth' have also been hammered with recessed rectangular panels to emphasise their geometric qualities. Both cusps and teeth are razor-sharp to create serrated cutting edges.

Although such a blade might have been intended primarily to show off the skill of the smith, Capwell, in the Catalogue Noble Art of the Sword (Wallace Collection, 2011) suggests its threatening appearance was not entirely accidental and that it may have been hoped that its appearence would surprise and unsettle an combatant in the opening stage of a duel. The serrated edges might also have prevented an adversary from grabbing the blade during a fight.

The hilt is pierced, chiselled and filed to create a series of linked chains in harmony with the geometry opf the blade. Several other Italian chain hilts made in this style survive including one that belonged to Don Juan of Austria (1547-78), famous for his victory in the Battle of Lepanto (1571).

Swords were not just weapons but important decorative elements in masculine costume. They were symbols of honour and rank for their owners throughout Europe. They remained an indispensible feature of outdoor dress of any person with pretensions to status until the late 18th century in Europe.

The most common sword worn by gentlemen with their civilian dress from the middle of the 16th century onwards was the rapier. From 1560 it was applied almost exclusively to a fencing sword for civilian use. It was usual for rapiers to be accompanied by matching daggers. The rapier was a thrusting and slashing weapon with a slender light blade, while the dagger was more robust, used primarily for parrying and for thrusting in close. Rapier scabbards were suspended from a belt in a form of sling while the dagger was generally worn in a sheath on the left hip.

In England rapiers were subject to sumptuary laws determining levels the of ostentation in which one might dress according to status. John Stow (ca. 1525- 1605) wrote of 'grave citizens' positioned by Royal decree at the gates of London who job it was 'to break the Rapier's poynts of all passengers that exceeded a yeard in length of their Rapier.'

The classic rapier of the period 1570-1630 had a 'swept' hilt like this one. This was made up of interlinked bars and rings in front of and behind the guard sweeping in an elegant curve from the rear of the hilt to the knuckle guard. It afforded much more protection for the hand than the older straight quillons but was still not immune from the thrust of a thin rapier blade.

Sword hilts became more and more elaborate after the introduction of firearms. Prior to that swords were used against armour primarily as cutting and thrusting weapons while the hand was protected by a gauntlet or by mail. Improvements to firearms made much armour redundant and so freedom of movement became more of a priority particularly as swords became more part of civilian dress. Civilians were unlikely to wear hand protection in the way a soldier would and a forward thrust would expose the hand to danger. Hilts became more elaborate as a result. Fencing as a training activity became increasingly codified and a standard part of male education. The most expensive hilts received the richest ornament that could be applied without impairing the sword's function.

Sword blades were articles of international trade, made in a few important centres and shipped all over Europe where they were fitted with hilts in the local fashion. During the 16th and 17th centuries the sword blades of Toledo, Valencia and Milan were the most sought after but the largest centre of production was the German town of Solingen. The finest hilts were usually equipped with a Spanish blade but if not available a German blade (sometimes with a spurious Spanish inscription) was fitted instead. This example is signed VALENCIA ME FECIT.

Rapier with a cut, pierced and engraved steel hilt in the form of chains, blued and inlaid with gold with a Spanish flamboyant blade, France, ca. 1600