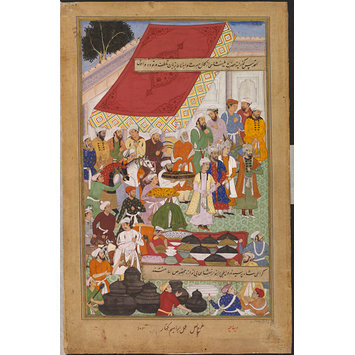 This is the left half of a double page illustration designed by the Mughal court artist La’l and painted by Ibrahim Kahar for the Akbarnama (Book of Akbar). It depicts the arrival of the Iranian ambassador, Sayyid Beg, in 1562 at the royal court in Agra of the Mughal emperor Akbar (r.1556–1605). This page shows the entourage of the ambassador bearing the gifts sent by Shah Tahmasp of Iran. The other side of the composition ( IS.2:27-1896) depicts Akbar enthroned, receiving the ambassador.

Painting, in opaque watercolour and gold on paper, left half of a double picture, the right being IS.2:27-1896: it depicts Akbar receiving Sayyid Beg, the ambassador from Iran.

'Tarh La'l/amal Ibrahim Kahar'
'composition by La'l/work [= painting] by Ibrahim Kahar'
Contemporary librarian's attributions in Persian, in red ink in the margin below the painting.

The Akbarnama was commissioned by the emperor Akbar as the official chronicle of his reign. This was written by Abu'l Fazl between 1590 and 1596 and is thought to have been illustrated between ca.1592 and 1594 by at least forty-nine different artists from Akbar's studio. After Akbar's death in 1605, the manuscript remained in the library of his son, Jahangir (r. 1605-1627) and later Shah Jahan (r. 1628-1658). The Museum purchased it in 1896 from Frances Clarke the widow of Major General Clarke, an official who had been the Commissioner in Oudh province between 1858 and 1862. 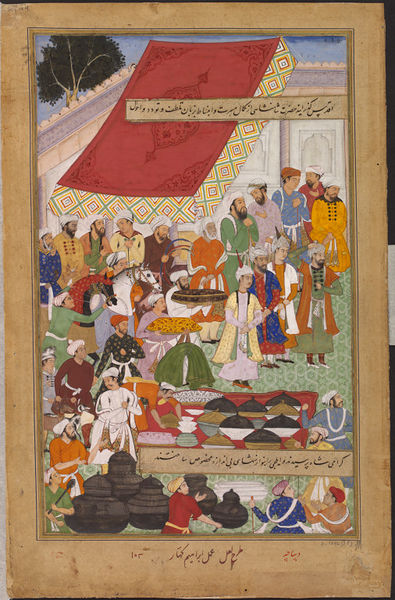