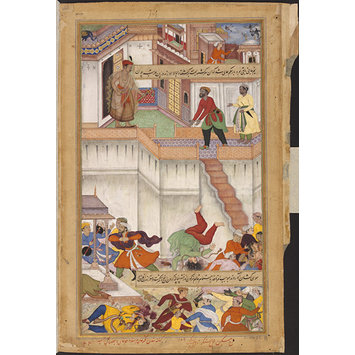 This illustration by the Mughal court artists Miskin and Shankar depicts Adham Khan, foster brother of the Mughal emperor Akbar (r.1556–1605), being thrown from the palace walls at Agra, north-west India. This was his punishment for having burst into the private apartments of the palace with his companions, one of whom had stabbed the emperor’s prime minister to death. The different episodes of the incident are shown concurrently. Akbar emerges from his sleeping quarters, sword in hand, having been awoken by the commotion. He orders the immediate death of Adham Khan, who is thrown from the terrace.

The painting is from the Akbarnama (Book of Akbar), commissioned by Akbar as the official chronicle of his reign. The Akbarnama was written in Persian by his court historian and biographer, Abu’l Fazl, between 1590 and 1596, and the V&A’s partial copy of the manuscript is thought to have been illustrated between about 1592 and 1595. This is thought to be the earliest illustrated version of the text, and drew upon the expertise of some of the best royal artists of the time. Many of these are listed by Abu’l Fazl in the third volume of the text, the A’in-i Akbari, and some of these names appear in the V&A illustrations, written in red ink beneath the pictures, showing that this was a royal copy made for Akbar himself. After his death, the manuscript remained in the library of his son Jahangir, from whom it was inherited by Shah Jahan.

Painting, in opaque watercolour and gold on paper, the illustration depicts Akbar's foster brother Adham Khan being thrown from the palace walls at Agra as punishment for having stabbed the Ataga Khan. The composition of the painting is arranged on two levels. The upper level shows the emperor standing on a terrace, instructing his attendants to throw Adham Khan over the parapet. The lower part of the painting shows him tumbling down, and the corpse of Ataga Khan in the foreground. The image is overlaid by two bands of text extending from the right hand margin.

'Tarh Miskin/amal Shankar/nami chehra Miskin'
'composition by Miskin/work [=painted] by Shankar/faces by Miskin'
Contemporary librarian's attributions in Persian, in red ink in the margin below the painting.

The Akbarnama was commissioned by the emperor Akbar as an official chronicle of his reign. It was written by Abu'l Fazl around 1590, and illustrated during the same decade by at least forty-nine different artists from Akbar's studio. After Akbar's death, the manuscript remained in the library of his son, Jahangir. The Museum purchased it in 1896 from the widow of major General John Clarke, an official who served as the Commissioner in Oudh province.

Composition by Miskin; painted by Shankar, faces by Miskin. 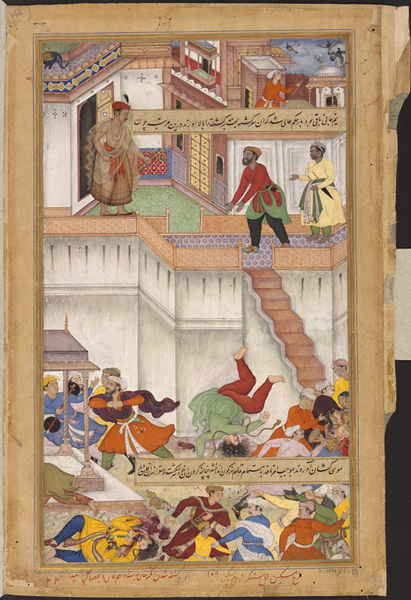