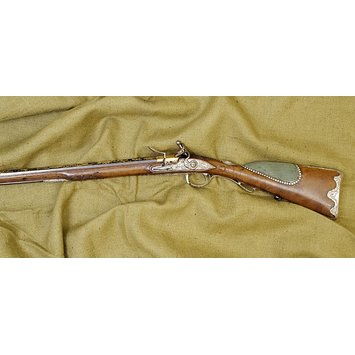 The walnut stock of half length is slightly carved, with silver mounts, chased with hunting subjects and with trophies. On the buttplate, the Paris hallmark for 1777-8. The comb of the butt is provided with a green velvet cheek piece. The lock-plate is chiselled and gilt with a reclining huntsman with hound, and is signed 'Delety à Paris Rue Coqillère'. The barrel, octagonal at the breech, is of round section towards the muzzle and is provided with a sighting rib along the top. The barrel is blued and gilt, the section towards the breech is incised with foliage and trophies. It bears the stamp of A. Pedro Esteva of Barcelona.

Stamp of A. Pedro Esteva of Barcelona
Barrel

Historical significance: This gun was constructed for firing from the left shoulder, the lock being placed on the left hand side of the stock.

Arms and armour are often dissociated with art. However, they were influenced by the same design sources as other art forms including architecture, sculpture, goldsmiths' work, stained glass and ceramics. These sources had to be adapted to awkwardly shaped devices required to perform complicated technical functions. Armour and weapons were collected as works of art as much as military tools and were presented as gifts to honour ambassadors and other dignitaries.

Firearms combined virtuoso craftsmanship with high quality engineering. This gun is fitted with a flintlock firing mechanism. Flintlock guns largely superseded wheel-lock guns by the late 17th century. The flintlock's invention is credited to Marin Le Bourgeois, gunmaker to Louis XIII of France, in around 1610.

The flintlock was less complicated and more reliable than a wheel-lock. Its simplicity encouraged the development o fsmaller, lighter guns. Flintlocks could fire accurately for up to 100 metres. Their increasing accuracy encouraged wars to be fought at longer range.

Some flintlocks had spirally grooved or rifled barrels improving their accuracy and range. Flintlock guns with rifled barrels needed more cleaning and took longer to load. They were more commonly used in hunting than on the battlefield where guns were fired quickly in volleys.

The flintlock was fired when the flint held in the cock, struck the steel pan (frizzen) opposite, causing sparks to ignite the priming powder. A detailed description of loading and firing a flintlock gun follows:

Most flintlock guns were loaded from the muzzle with gunpowder and lead shot. These are pushed into the breech of the barrel with the ramrod. The ramrod is stored in a slot beneath the barrel.

An arm, or cock, at the back of the lock holds a sharp piece of flint. This is moved part of the way backwards until it clicks into position at half-cock. It has a safety catch to prevent the gun being fired accidentally.

On top of the lock is a flash pan which is charged with priming powder, a fine powder that ignites easily. The flash pan is opened by lifting the cover, called a frizzen. When the flash pan is filled with a measured dose of priming powder, the frizzen is then closed presenting a pan-shaped steel surface towards the cocked flint.

The cock is pulled back further, from half-cock to full-cock, releasing its safetly catch. When the trigger is pulled, the cock holding the flint springs forwards. The flint strikes the frizzen, opening it to reveal the priming powder, and causing sparks to fly when it strikes the hard steel surface. The sparks ignite the priming powder in the flash pan. The flash passes through a vent or touchhole into the breech of the barrel and ignites the main powder charge, and the gun fires.