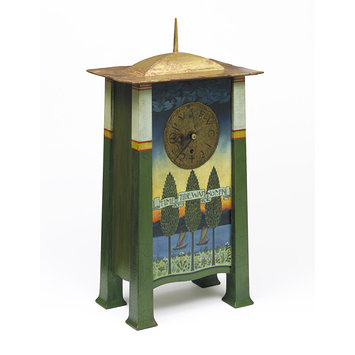 Object Type
Although this clock has an architectural shape and unusual decoration, it is fitted with a conventional movement. It is decorated with the childlike, flat patterns that its designer, C.F.A. Voysey (1857-1941), used for his textiles and wallpapers. There is another example of the same clock in the Museum of Fine Arts, Richmond, Virginia, USA.

People
C.F.A. Voysey, an architect and designer, was fascinated by clocks and designed many different types, ranging from domestic clocks, like this one, to large examples intended for offices and public buildings. He owned a clock like this which was photographed in his home, The Orchard, Chorley Wood, Hertfordshire, in 1901. An almost identical clock belonged to Mary, Countess of Lovelace (1848-1941), an Arts and Crafts enthusiast. She and her husband commissioned designs from Voysey for a new house at Ockham Park, Surrey, in 1894.

Time
Voysey's original design for this clock, dated 1895, shows conventional roman numerals on the face. In 1896 he exhibited a clock with that type of face at the Arts and Crafts Exhibition Society in London. By 1901 he had exchanged the numerals for the Latin phrase tempus fugit ('time flies'), a characteristically neat reminder of the clock's function.

Mahogany case made by F Coote and painted and gilded by CFA Voysey.
Movement made of brass and steel, by Camerer, Cuss and Co.

John Jesse purchased this clock without a provenance at Portobello Market in 1970. He then placed the object on loan to the Museum in December 1970.

Voysey's original design (RIBA Drawings Collection) dated 1895, shows a clock face with Roman numerals, and a clock with Roman numerals on the face was illustrated in The Studio, vol. vii, 1896, p. 217. A photograph of a display at the Arts and Crafts Exhibition Society exhibition in 1896 (illustrated C.F.A. Voysey by Wendy Hitchmough, Phaidon Press 1997, page 59) shows the clock with the numerals replaced by the letters TEMPUS FUGIT. Voysey owned a clock with this new face, shown in a photograph dated 1901 of the hall at his home, The Orchard.

There are other examples of the Tempus Fugit clock. One is inscribed with the name of Mary, Countess Lovelace, an early and faithful patron of Voysey for whom he designed furniture. John Jesse also owned this clock and it is now in the Virginia Museum of Fine Arts, Richmond, Virginia, USA. Another example of the Tempus Fugit clock is in a private collection in London.

A clock, of the same form with the Tempus Fugit face, stamped with the registration mark No.308824 for 1897, but undecorated and made of ebony, was sold by John Jesse in 2005. The design of the case proved popular and versions with Roman numerals include a plain white one (private collection, London) and one decorated by Robert Anning Bell (Walker Art Gallery, Liverpool) as well as an aluminium version made by W H Tingey (one of these was exhibited at the Arts & Crafts exhibition of 1903, No.394c, and was illustrated in House & Garden, III, 1903, p.211).

Purchased with the assistance of the National Art Collections Fund and the Friends of the V&A.
Museum No. W.5-1998 [1998]
access all areas
Charles Francis Annesley Voysey (1857-1941)
Clock
Body of painted and gilded wood

It would appear that Voysey created this very clock for himself, as the design almost matches the drawing in the possession of the RIBA displayed in this exhibition. Also, a near-identical clock can be seen in photographs of Voysey's own dining room, from about 1900. However, there is another similar clock in the Museum of Fine Art, Richmond, Virginia. The body of this clock would have been painted by Voysey himself. [18/05/2000-24/09/2000]
CLOCK
1896 - 1901

C.F.A. Voysey originally designed this clock with roman numerals but substituted these for a Latin inscription denoting the passing of time. The British countryside fascinated Arts and Crafts designers and its depiction throughout the seasons became a characteristic of this style. At least two versions of the clock are known, one of which was owned by the designer.

Painted and gilded mahogany; movement of brass and steel
Designed by C. F. A. Voysey (born in Hessle, North Humberside, 1857, died in Winchester, Huntingtonshire, 1951); probably made by Frederick Coote in London

Movement stamped by Camerer, Kuss & Co.; inscribed TIME AND TIDE WAIT FOR NO MAN and, on the clock face, TEMPUS FUGIT

Purchased with contributions from the Friends of the V&A and the National Art Collections Fund, an independent charity

Museum no. W.5-1998 [2001]
British Galleries:
C.F.A. Voysey originally designed this clock with roman numerals but replaced them with a Latin inscription meaning 'time flies'. The British countryside fascinated Arts and Crafts designers and its depiction throughout the seasons became a characteristic of this style. At least two versions of the clock are known, one of which was owned by the designer. [27/03/2003]
International Arts & Crafts:
Clock
1895
English; designed by C.F.A. Voysey
Painted and gilded mahogany
V&A:W.5-1998 [17/03/2005] 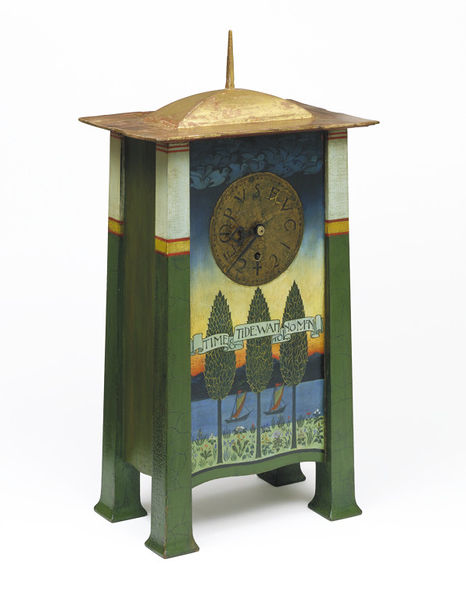