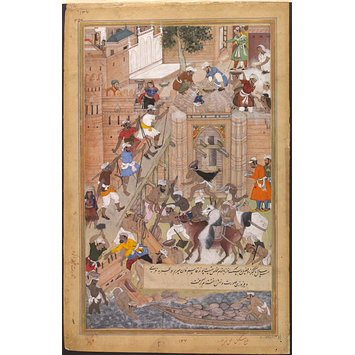 This is the left side of a double-page composition designed by the Mughal court artist Miskin and coloured by Tulsi the Younger. It is an illustration to the Akbarnama (Book of Akbar), and depicts the construction of the fort at Agra for the Mughal emperor Akbar (r.1556–1605). The fort was completed in 1566 and enclosed an area of 2 kilometres. This painting illustrates various construction processes performed by male and female labourers, of whom there were three to four thousand according to the text. The right half of the painting (Museum no. IS.2:45-1896) similarly illustrates the construction process.

Painting, in opaque watercolour and gold on paper, left side of a double picture, the right side being IS.2:45-1896. Depicts the building of the fort at Agra. The image shows the different sorts of labourers at work. A band of text extending from the upper left hand margin overlays the image.

'Tarh Miskina/Amal Tulsi Khurd'
'composition by Miskina / work [= painting] by Tulsi the Younger'
Contemporary librarian's attribution in Persian written beneath the image at the bottom of the page in red ink.

The Akbarnama was commissioned by the emperor Akbar as the official chronicle of his reign. It was written by his court historian and biographer Abu'l Fazl between 1590 and 1596 and is thought to have been illustrated between c. 1592 and 1594 by at least forty-nine different artists from Akbar's studio. After Akbar's death in 1605, the manuscript remained in the library of his son, Jahangir (r. 1605-1627) and later Shah Jahan (r. 1628-1658). The Museum purchased it in 1896 from the widow of Major General Clarke, an official who had been the Commissioner in Oudh province between 1858 and 1862. 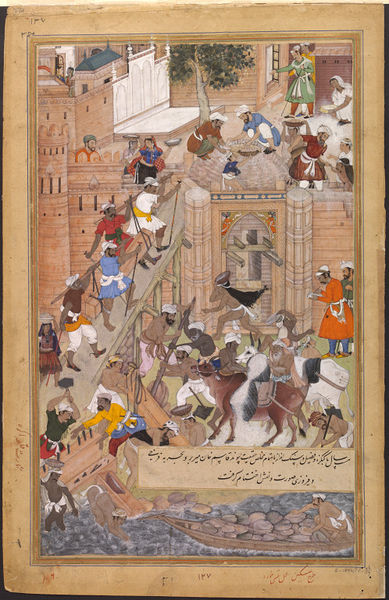