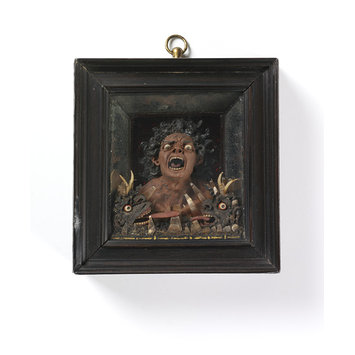 This wax is one of a pair, which may have been part of a larger group. Similar objects in the collection (A.19, 20, 21, 22-1982) also represent souls in Paradise, Purgatory and Hell. These highly realistic and dramatic wax tableaux served as ‘memento mori’, intended to inspire thoughts on mortality. Wax modelling had acquired a certain status by the sixteenth century, as it lends itself to the type of intricate workmanship on a small scale which can be seen in this object,and enhanced by the use of colour and texture to mimic flesh.

This wax is in the style of Gaetano Giulio Zumbo or Zummo (1656-1701), who was known for his expressiveness, as seen in this evocative image. Born in Syracuse to an impoverished aristocratic Sicilian family, the early life and training of Zumbo is shrouded in mystery. He spent time in Rome, Naples and Bologna, where his presence among circles of anatomists is recorded. In Bologna, he is thought to have been the first to propose using coloured wax for anatomical teaching models. From 1691 to 1695, he served Grand Duke Cosimo III and created his most famous teatrini (‘little theatres’), many of which were highly realistic and dramatic wax tableaux that served as ‘memento mori’ and intended to inspire thoughts on mortality (such as A.3-1966).

This relief in coloured wax, which is set on a red glass ground with sloping side pieces of mirror glass, shows the head of a man in full face with open mouth and hair in disarray. In the lower front corners of the relief are two heads of devils with horns and protruding tongues amid flames made of splinters of mica.

'Wax. Illustrating Hell by Zumbo a Florentine Monk. One of the same on a large scale is in the Pitti Palace, Florence. Exhib. at Italn. Art Exhibn. From Propert Coll. Art 1903'
On a label on the back of the frame .

Waxes showing the fate of the soul

These dramatic and highly realistic wax sculptures depict the possible fate of the immortal soul. According to Catholic doctrine, the soul is judged at death and sent to Heaven for eternal reward, Hell for eternal punishment, or Purgatory for a period of purifying repentance. These sculptures were probably for private devotion, a potent reminder of the terrifying fate of damnation and that time in Purgatory could be lessened through the prayers of the living.

Inscribed on the back of the frame in Latin ‘Death to the bad, life to the good’ 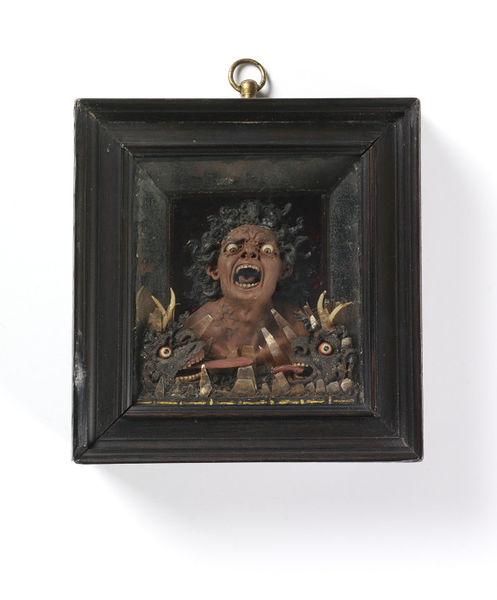