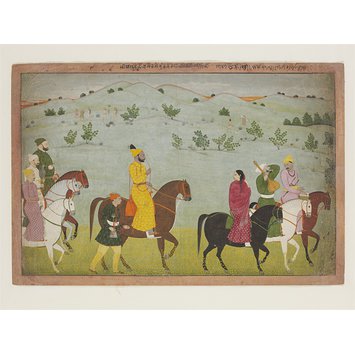 This painting is by the renowned Pahari painter Nainsukh. Pahari is a style of painting particular to the Punjab Hills of northern India. This painting shows the local ruler Mian Mukund Dev of Jasrota, one of the small historical states of the region, riding with musicians. Mukund Dev (about 1720-1770) is wearing a yellow robe in honour of the Spring festival of Vasant. One of the musicians riding before the prince is singing, while his companion plays a drum. The lady with them is identified in the inscription in the upper border as 'the singer Amal'.

Painting, opaque watercolour with gold on paper, Mukund Dev, wearing a bright yellow jama, is riding on a brown horse through a mustard field in open country, with an attendant walking beside him holding his huqqa. Behind him are riding three courtiers. One is carrying a hawk and another holds a flower. Before Mukund Dev rides the female singer Amal, her head turned round to look at him. She is preceded by two musicians on horseback. One is singing and holding a tambura, while the front one plays a tabla (drum). In the background are undulating slopes and hills in pallid green marked by palash trees. Two groups of tiny figures can be seen. The group on the left comprises five attendants each carrying a hawk. That on the right two servants accompanied by two dogs. The contours of the hills are marked with pink and there are orange streaks in the sky. Significant points are the bare and open landscape, scattered palash trees, groups of small figures, the exquisite rendering of the mustard flowers (appearing like a mist around the horses' legs) and the expressive gestures of the singing girl and the two musicians.

The central figure, Mian Mukund Dev, is closely modelled on Balwant Singh himself, his grave posture, rich dress, huqqa, horse and footman being virtually identical to those of Balwant Singh in a scroll painting in this collection (47). Since the picture is inscribed in the same hands as other pictures of Balwant Singh and has a similar Jammu provenance, it is likely that it was made by Nainsukh for inclusion in Balwant Singh's own collection. In this connection it is noteworthy that the inscription in the top border expressly underlines Mukand Dev's inferior status by applying to him the term 'Mian' in contrast to the terms 'Raja' and 'Maharaja' invariably used for Balwant Singh. The fact that the name of the singing-girl is carefully noted and that Mukund Dev's musicians are singing as they ride suggests that Mukund Dev relished music as keenly as did Balwant Singh - a taste which could well explain their friendship. Although the picture is in general outside the main stream of painting at Jammu, it nonetheless includes an idiom peculiar to Jammu painting- the outlining of contours with a softly washed-in rim, pink in this case.

Painted in opaque watercolour with gold on paper

'Miyan mukund de sher shikar karan phirde likh de amal kachni he'
or:
'Mian Mukand Dev ser sakar karde phirde likhe de. Amal kanchani hai'
'Mian Mukand Dev portrayed on a riding picnic. Amal is the singing girl.'
or:
'Mian Mukund Dev painted (shown) out for a leisurely ride and for hunting. (This) is Amal, the kanchani (singing/dancing girl).'
On top border. In Takri. The first version and translation are those given in Archer (1973). The second version and translation are those given in Goswamy (1997).

Saddu kalawant. Malla pakhaujia.
'Saddu, the kalawant (stringed instrument player). Malla, the pakhaujia (pakhawaj-drum player)'
On top border, in Takri. Content and translation given by Goswamy (1997) who describes this as a continuation of the last part of the first inscription 'Amal kanchani hai' but notes the inscription is partially obliterated.
Archer (1973) had described this last part of the inscription as illegible.

(sd) J.D. Tata
On the reverse, in English by rubber stamp

From the collection of Dr W.B.Manley, Guildford. Formerly in the possession of Durgi Raina, Pacca Danga, Jammu.

Mukund Dev (c.1720-70) is wearing a yellow robe in honour of the Spring festival of Vasant, and an inscription on the reverse states that he is listening to raga Vasant.
One of the musicians riding before the prince is singing, while his companion plays the tabla. The lady with them is identified in the inscription on the upper border as ‘the singer Amal’. [2000]

Jasrota, Punjab Hills. W.G. Archer (1970) attributed the painting along with other Nainsukh paintings to Jammu and dated it c.1754; but B.N. Goswamy (1997) dates it to 1740-45 and suggests that Nainsukh was working at Jasrota. 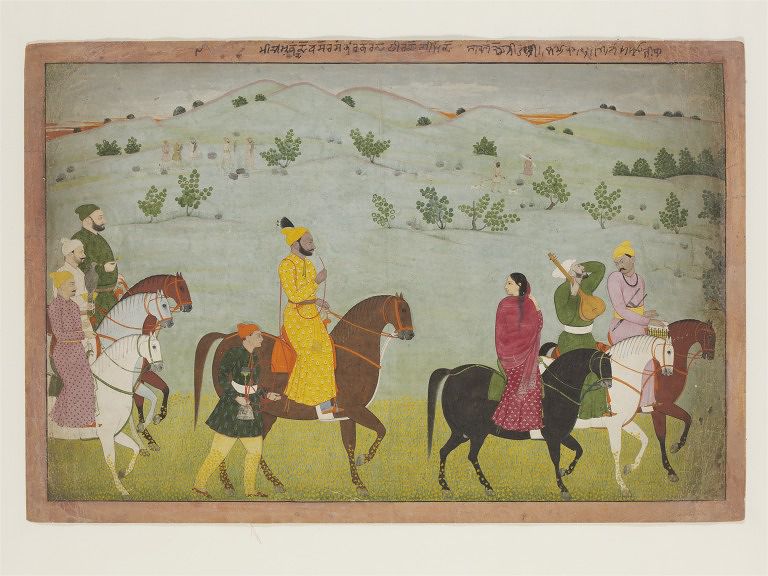