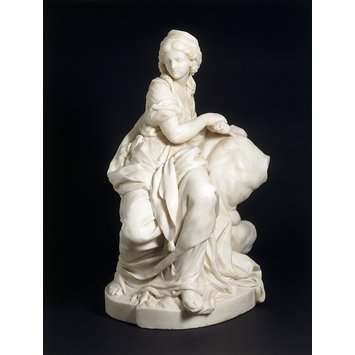 This is an early work by Etienne-Maurice Falconet (1716-1791). Its subject is the Allegory of Sculpture. The circumstances in which it was made are intriguing.

Sculptors working in Paris at the time aimed to progress through a hierarchy controlled by the Royal Academy of Painting and Sculpture. Falconet’s submission of a terracotta study of Milo of Crotona resulted in him being an agréé (approved by the Academy in principle) and therefore allowed to submit a morceau de reception; a finished work, of a given subject, usually based on a previous approved study. It was designed to impress and satisfy the Academy sufficiently for the sculptor to become an Academician. In 1744 Falconet was asked by the Academy to produce ‘le Genie de la Sculpture’ (the Allegory of Sculpture; so not the subject of his previously submitted and approved work). He produced terracottas of this in 1745 (sketch) and 1746 (more finished model). But records show that Falconet finally submitted a marble of Milo of Crotona as his morceau de réception in 1754 and was made an Academician as a result. No explanation for his return to the previous subject has come to light.

Falconet’s rise to fame was greatly helped by his promotion by the French philosopher Diderot, who not only asked Falconet to contribute the entry on Sculpture for Diderot’s multi-volumed Encyclopedia but also corresponded with him extensively. Diderot, highly regarded by Catherine the Great, helped bring about Falconet’s commission for a large and still prominently situated bronze equestrian statue of Peter the Great in St Petersburg. Falconet was warmly welcomed by Catherine when he arrived in Russia in 1766 and he stayed until 1778.

Falconet is best known for works which might be considered sentimental today but which were highly regarded by Madame de Pompadour and other supporters of Falconet at the time. These included a female bather and a smiling, mischievous cupid; works which were reproduced extensively including in porcelain by the factory at Sèvres.

A draped female figure is eated beside the Belvedere torso, on which she rests a chisel. On the floor lies the head of a putto. Signed F above the putto head.

'F'
Signed above the putto head

Statue, marble, the Allegory of Sculpture, by Etienne-Maurice Falconet, French, about 1746

Allegory of Sculpture
About 1746

The sculptor Falconet began this personification of the art of sculpture intending to submit it when applying to become a full member of the Academy of Painting and Sculpture in Paris. Falconet contributed an essay on sculpture to the Encyclopédie, at Diderot’s invitation. Later, he went to St Petersburg to work for Catherine the Great.

‘Sculpture is the art which, through the use of design and solid materials, imitates with the chisel the palpable objects of nature. Sculpture, like history, is one of the most enduring repositories of men’s virtues and weaknesses.’ [09/12/2015] 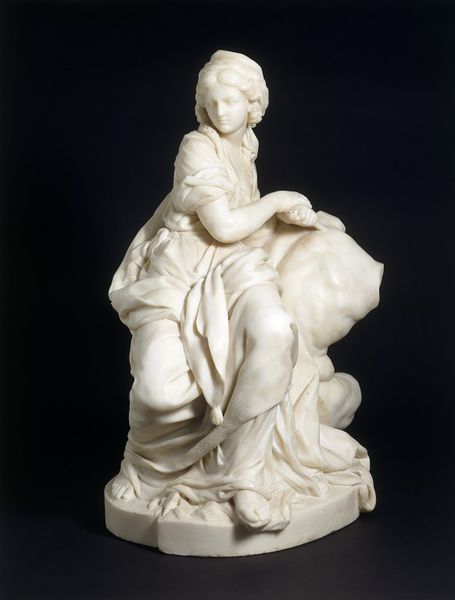