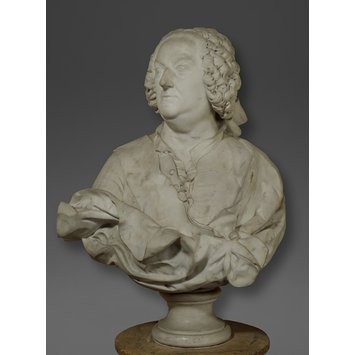 The subject of this marble bust is the eminent painter, Jean-Francois de Troy, who in 1783 was made Director of the French Academy in Rome, where pre-eminent French sculptors studied. A terracotta and a plaster model for this bust are still to be seen there. Although these works are unsigned, the sculptor is almost certainly René-Michel (Michelange) Slodtz, who was a friend of the sitter.

Michelange Slodtz was one of five sons of the sculptor Sébastien Slodtz. He won first prize for Sculpture at the Académie in Paris and went to Rome two years later, where he stayed until 1746 when he returned to Paris. In Rome, he was profoundly influenced by the sculpture around him and particularly by the work of Bernini. This bust, and above all its confident and energetic depiction of drapery, shows both the elegance of Bernini's work as well as a remarkable skill in handling marble. Slodtz became the most distinguished French sculptor in Rome at the time.

The subject looks to his half-right. He wears a curled wig tied behind with a bow. His frilled shirt and jacket are unbuttoned at the neck. Over these is a broad sash and a cloak which terminates the bust with a flourish.

The eminent painter Jean-Francois de Troy was made Director of the French Academy in Rome in 1738. A terracotta and a plaster model for this bust is still to be seen there.

This bust was attributed to the German sculptor Willem de Groff (d.1742) when it was inventoried in 1952. In his publication on the Slodtz family (1967), François Souchal attributed the terracotta and plaster busts, referred to above, to Michelange Slodtz. Terence Hodgkinson (1972) supported this attribution for the V&A marble bust and firmly identified the sitter as a result of Souchal's work. However, in 1982, having by then seen the marble at the V&A, Souchal re-attributed it to Pierre Lestache (1687-1774). In 1995 there was another unpublished suggestion that this bust was by Coustou. However, Souchal's attribution to Lestache has been rejected by the most recent scholarship (Anne-Lise Desmas, 2002) and the bust re-attributed by her to Slodtz.

The artist Jean-François de Troy is best known for his paintings of Parisian high society. In 1738 he became Director of the French Académie in Rome, where prizewinning French artists were sent to study. This portrait is probably by his friend Michel-Ange Slodtz, the leading French sculptor working in Rome at the time.

‘Academy is a public school where Painters go to draw or paint, and Sculptors model. Every three months, three Drawing prizes are distributed and every year, two prizes in Painting and two in Sculpture; those who receive Painting and Sculpture prizes are sent to Rome at the King’s expense, to study and improve their skills.’ [09/12/2015]
Bust of a Man
1786

The unidentified sitter is fashionably dressed in a double-breasted coat with a wide turned-down collar and large buttons. He wears a wig and a linen stock tightly wound at his neck, and displays his shirt ruffles down his front. Alert, poised and stylishly dressed, his appearance is one of great confidence.

‘Appearance. Properly speaking the external surface of something, or in general what first affects the senses, spirit and imagination. Our errors almost all come from our haste to judge things, and, in our hurry, do not allow us to distinguish truth from what is mere appearance.’ [09/12/2015]
JEAN FRANCOIS DE TROY
French; about 1740
Marble
Ascribed to Rene-Michel (called Michelange)
Slodtz (b. 1705; d. 1764)
Purchased under the bequest of Captain H. B. Murray

The eminent painter Jean-Francois de Troy was made director of the French Academy in Rome in 1738 and a plaster version of this bust is still to be seen there. Although both versions are unsigned, the author is almost certainly Michelange Slodtz, who was a friend of the sitter and was the most distinguished French sculptor in Rome at the time.
[1993 - 2011] 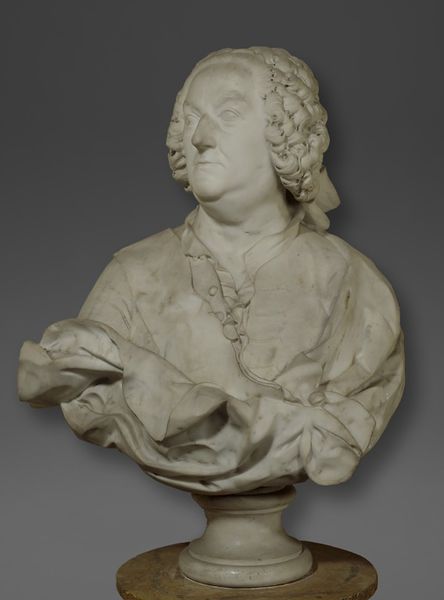