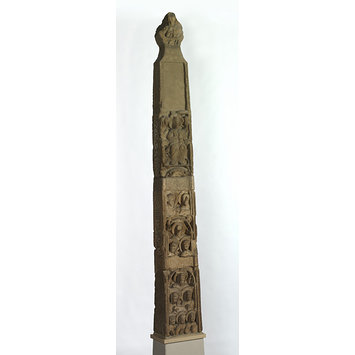 The monumental free standing cross was a phenomenon unique to the British Isles and Ireland, and this is one of the finest surviving examples. Carved with great skill, the decoration unites interlace patterns of the British Isles with imagery derived from mainland Europe, such as the pecking bird and the figures of the apostles.

Fragment from the shaft of a cross, known as the Easby Cross, sandstone. Rectangular, tapering slightly towards the top, the stone shows on one face the nimbed figure of Christ in Majesty. On either side at the top appear the heads of two angels. The whole surrounded by a raised border. Below the figure of Christ is the top part of a semicircular arch and the halo of a figure now missing. The second broad face shows scrollwork within which are a bird with half-opened wings and below a horse-like beast moving to the left. On either side a ropework border. The narrow sides show alternate panels of vine scrolls and interlaced ornament.

Unusually for a monument of its size, the stone from which the fragment is carved, is not local to Easby. The medium-grained deltaic sandstone matches stone traditionally produced in the Aislaby quarries of Eskdale near Whitby.
This fragment of the cross was noted in 1869 as being kept in the grounds of Easby House, in a private collection. According to local tradition it was discovered by the owner, R.M. Jaques, in a field wall. This fragment was purchased by the museum in August 1930 from L. Jaques of Easby House. Later that year, the three other surviving pieces of the cross were bought for the museum by the National Art-Collections Fund and extracted from the fabric of Easby Church into which they had been built.
The cross from which this fragment comes was broken and mended at some time between its creation in about 800 and the use of at least three of the fragments as building blocks for Easby church, probably in the thirteenth century. Molten lead was used to mend the cross, a process recorded by Symmeon of Durham in a similar operation on a cross from Lindisfarne.

Historical significance: The tradition of monumental crosses in the north in this period reflects the early political superiority of the Northern kingdom during the Anglo-Saxon Heptarchy; the universal abundance of stone and the flourishing Christianity of the kingdom.
During the period to which the cross has been dated, Easby was in the southern part of the kingdom of Northumbria known as Deira. While the kingdom experienced political turmoil with squabbles over kingship, the church conversely flourished and experienced a single-minded development. The location of Easby close to York, may reflect a link to the city and the thriving church there. This would certainly explain the Carolingian connection to which the decoration attests.
The European connection to the area was two fold. Alcuin joined the court of Charlemagne in 782 and he was in constant contact withYork. His respect for the York library and scholars propagated an infusion of Northumbrian culture into the Carolingian court. A two-way traffic of materials and ideas was established with the Carolingian court.
The other European connection was between York and Rome itself. The classicism of late antique and early ninth-century Rome informed the region’s major monuments in motif and technique. Metropolitan status required frequent visits to Rome for the conferral of the pallium (A woollen vestment conferred by the Pope on archbishops in the Latin Church, who are required to request it as a symbol of their participation in the authority of the Pope and of their right to exercise the power of a metropolitan), this may explain the taste for portraiture of the apostles which became apparent in the region.

Vine-scroll with or without animal inhabitants is one of the most common motifs to be found on monumental crosses. In association with the cross and images of the apostles, vine ornament provides a visual reference to John 15:1-11 in which Christ declares “I am the true vine” and through a vine analogy, establishes what he requires of a disciple. The nature of the Easby vine-scroll is exceptional amongst the preponderance of monumental stone sculpture available.
In seeking to record a sequential development in Anglo-Saxon sculpture using vine-scroll ornament, Professor J. Brönsted picked out the Easby cross as one of the earliest crosses. His assessment was based on a supposition that the ornament originated with foreign artists from the east, who had first-hand knowledge of the vine which gradually degenerated with subsequent generations of artists. Though Brönsted’s analysis of vine-scroll development is no longer widely accepted, the eastern origin of the ornament is most probable, with examples to be found in the Dome of the Rock.
There is evidence to suggest that the scroll was transmitted indirectly from this eastern source to Yorkshire. Ernst Kitzinger suggested that the cross represents an important stylistic stage-post in the iconographic chronology of Anglo-saxon sculpture. Citing oriental origins for the vine-scroll of many Northern crosses, he distinguishes Easby as having a “peculiar, thin and elaborate style” and convincingly concludes that the cross has a definite place in Carolingian art. He identifies a Carolingian ivory held in the Vatican to which the pecking bird on fragment A.9-1931 appears to be closely related and though it is no slavish copy, this close continental parallel has played a key role in dating the cross to the early ninth century. Professor Lang in his recent Corpus of Anglo-Saxon Sculpture states that “For such a work to appear in Yorkshire in the age of Alcuin is no surprise”.

The sides of the shaft stones bear the remains of alternating plant-scroll and interlace panels. The alternation of patterns, shows a continuity in layout and repertoire from early eighth-century monuments such as the Bewcastle and Ruthwell crosses . The strands of interlace are crisp and vertically incised and although they are unique in sculpture, some of the patterns appear on pages of the Lindisfarne Gospels. While different areas of decoration received different levels of treatment on other crosses, the control and elegance of the carving and the experimental variety of the interlace of the Easby cross are of a piece with the whole design of the cross.

Fragment of a sandstone cross, known as the Easby Cross, from Easby Abbey, near Richmond, Yorkshire, Anglo-Saxon, England, about 800-20

From Easby Abbey, near Richmond, Yorkshire